Helicopters Are Gliders Too (Massive Updraft)

On November 27, 2022, I found the mother of all updrafts in Microsoft Flight Simulator over Miami, Florida (Live Weather). The rising air was so strong that I could completely lower the collective of the Bell 407 and the helicopter would maintain altitude or even climb. It was very hard to get the heli down to land. 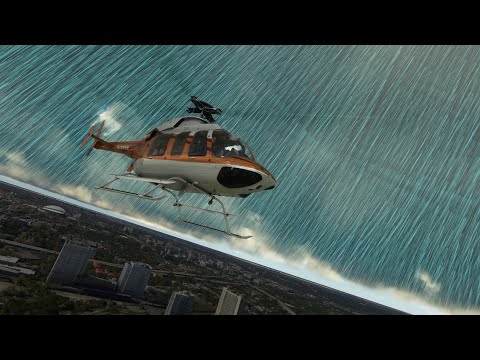 The rising air was so strong

and the manuall wind settings are ?

I can fly direct into the thermic and if I lower collective, it falls from the sky like a stone, if I not let glide him or play auto-rotation games.

ha… I found such a wind spot

it goes only little bit down

I can fly direct into the thermic and if I lower collective, it falls from the sky like a stone

Of course that depends on how strong the thermal is. The sheer amount and speed of the lines show that’s it’s a very strong one. It’s still there to try out:

Rl glider pilot here - current CFD models thermal very incorrectly - practically all fundamental properties of thermals are incorrect - incorrect (that is no) spatial relation to clouds of “ground thermals”, incorrect thermals distribution, incorrect thermals shape and size (like visible in your video) in RL thermals converge to the highest lift thermal core so they are not like a “whole city rising”, ground doesn’t produce rising airmass as depicted, only tightest core of around 500m diameter provides lift usable for gliders (only very near the cloud bottom would be sometimes wider) at the outside of thermal you would experience rotors thus downdraft, thermals shoudn’t also be constant - rather periodic, strong lift wouldn’t be laminar, rather abrupt and create more vortexes when passing through surrounding air.

Well, with incorrect thermal model everything - even a rock can be a glider, so why not a helicopter.

It is so much different than RL it is hard to call them thermals - rather some fantasy about rising air. Hope for next update they will listen to glider pilots feedback and change the model.