Hi guys.
A buddy of mine have a problem. He initially
installed the sim and it run flawless, very smooth. Later we wanted to do another flight and the sim asking for a disc. To solve this he reinstalled. Now the sim works, but it does stutter as hell. Fps are between 45-60 but stutters Ca every second.

Graphic driver is up to date, we also tried to disable the Bing streaming.

Is he running any thrid party softwares that are trying to access Simconnect? Things like spadnext, lorby’s, navigraph simlink, etc. These things are know to have cause frame drops as thier is a problem with simconnect.

No. Nothing that access sim connect. And as I mentioned it’s stuttering while the fps remain in the 40+ region

It`s all off. Some screenshots and/or a video will follow in the next few min

here is a screenshot. 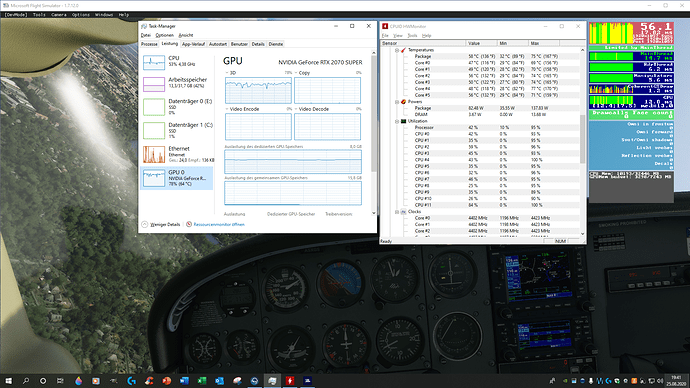 it even stutters on the ground just when looking around

Here as a video of what is hapening

Looks slightly better than what I’m seeing, probably because you have a slightly better CPU than I have (i6 6600K OC 22%). The game is very hard on 4 core processors but somehow that wasn’t always the case.
Best of luck perhaps one of the thousand solutions posted here will work for you.