Hey there, what is everyone’s strategy for seats in their home cockpits? I know it sort of depends on the aircraft, but just curious if people typically DIY them, or if there’s a common prebuilt one a lot of people use and then modify to their liking? Thanks in advance!

Follow up to this, I’m building a Citation Longitude style enclosed cockpit, so I’m going need two. FIgured I would just DIY them, but never hurts to ask first.

The new Next level racing flight sim cockpit seats look nice…I’m thinking about using those. I am on mobile right now but I’ll try to drop a link next time I’m on my PC.

I would love to hear more about your longitude project. How are you building it? What are you using for the G5000s?

My strategy 12 years ago,

Price? 30 Euros for both with cleaning and in perfect conditions.

I’ve taken multiple approaches over the years. I’ve never gone to the lengths of entirely fabricating my own seats, though it’s certainly within the range of the average DIYer depending on how complicated you want to get.

Way back when, I had a pre-built seat from one of those ‘racing / cockpit’ seat-and-frame combos you can buy on the internet. It was a racing-style bucket seat and it was OK for a few years. 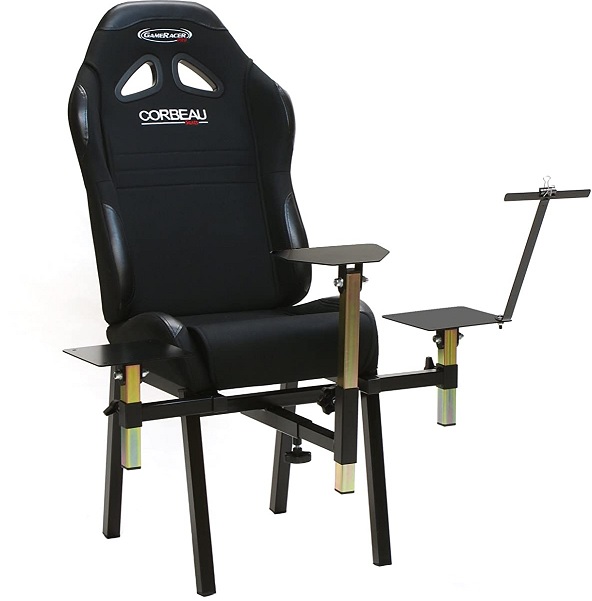 Then I bought a pair of old car seats, specifically from an SUV-style vehicle which had the capability to rotate through 180 degrees to face backwards. In my cockpit design at the time that was the way to get in. Those never really got used in anger, though, as that particular project died when I moved house and the seats were too bulky and heavy to take with me. 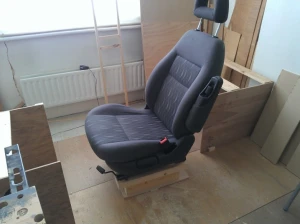 I still had my old racing seat and I built a new base for that and used that free-standing for a while. Eventually I got rid of the seat and bought a gaming-style office chair that I thought looked nice, and I removed the seat pan from it and fastened that down to my DIY base, which by now was fixed in place. Then I rebuilt the base, adding a car seat adjustment rack so I could adjust it backwards and forwards. Lastly I added a kind of poor man’s J-rails that lets me move the seat left and right for clearance when I am getting into the seating position as otherwise it’s very, very tight with my pedestal. 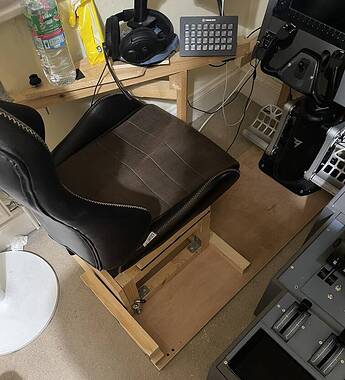 When I build my new simpit I will build a new seat base and I may either re-use the current seat pan or look for something new. Because I’m not simulating any particular aircraft type I’m not worried about convincingly looking like an airliner style seat or a GA style seat etc. I just want it to be comfortable and fit me!

Just as a side note. The other night I was watching the latest development update interview with Jorg and Sebastian from MSFS. There they mentioned that in January 2023 Longitude is getting an upgrade of the avionics. Looks like they are improving the G3000 and G5000 on the sim. And nice other accessible screens in the Longitude. 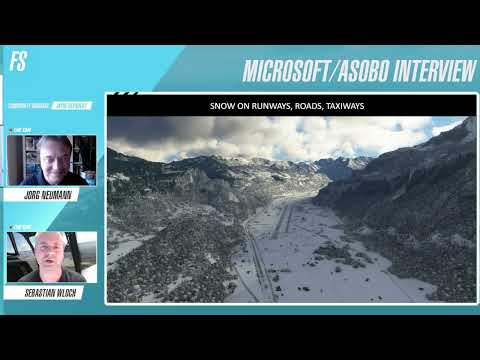 Yes sir! Been waiting on this release now for several months…it’s going to make my Christmas

Awesome, thanks for the all the ideas!

Also, couldn’t help but notice your center pedestal peaking out there in your last picture…is that all homemade (the throttle levers and everything)? Would love to see more of that!

I use a HD truck seat from the passenger’s side of the truck (little to no wear). They are bigger and more comfortable than a car seat.

Just as helicopters made my Christmas. Nice to have something to look forward to. Enjoy.

If I have an unlimited budget, since I only fly Airbus exclusively in MSFS, I would pick this home cockpit seat from Configure your A320 flight simulator - VIER IM POTT (vier-im-pott.com) 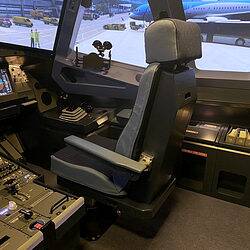 That’s a more recent project. The box and panels are DIY but the controllers are from Thrustmaster and VirtualFly. Here’s a better shot: 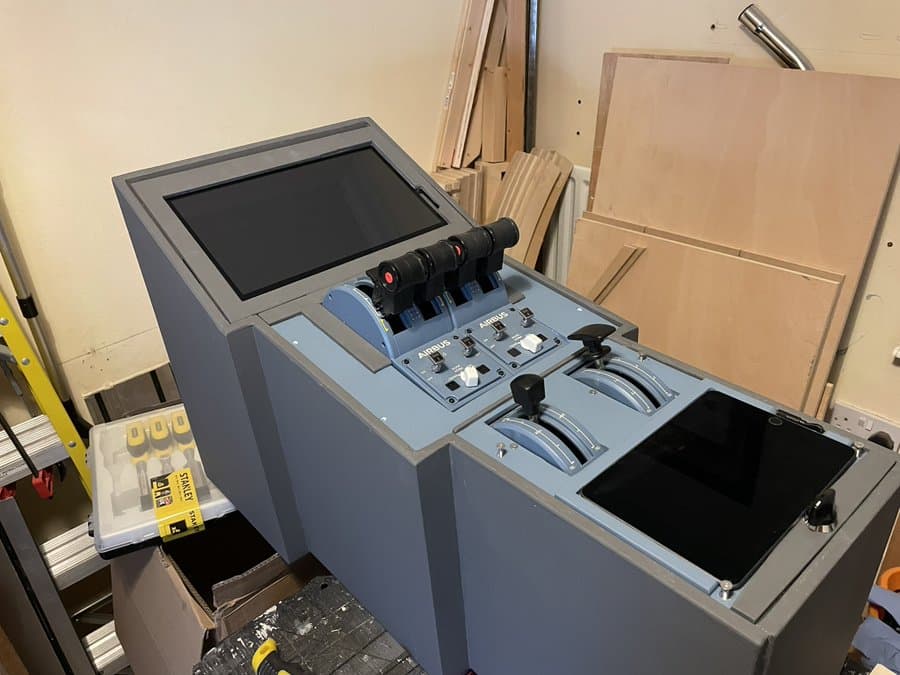 The throttle quadrant is interchangeable, so here it is with just a single pair of thrust levers: 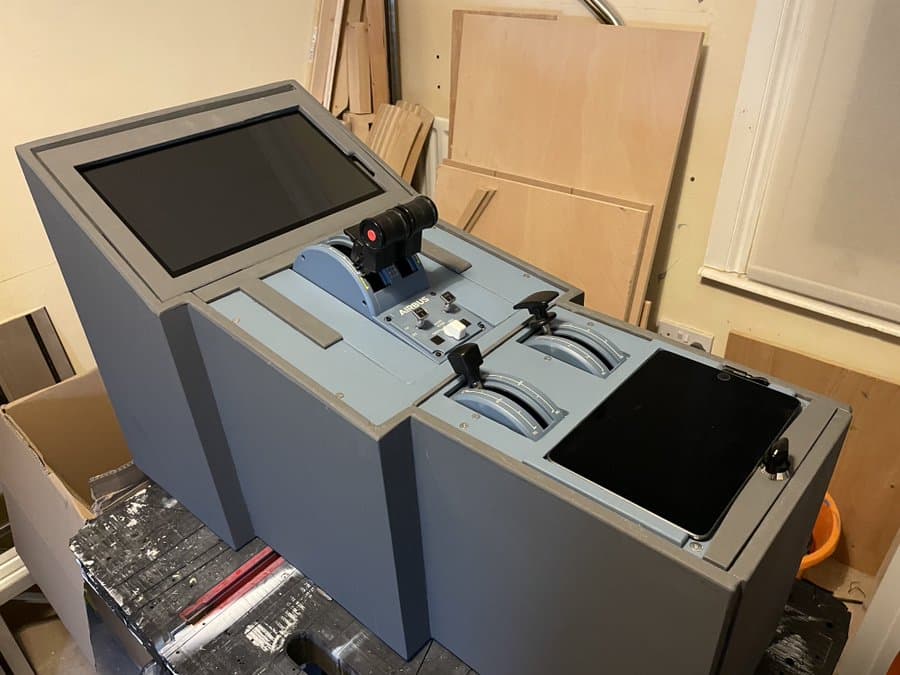 The iPad Mini you can see in its ‘dock’ is there to put Air Manager panels etc on, but also I can unplug it and use it as a scratchpad for Foreflight etc.

However… despite all the work I put into this, I really don’t like it. It’s very compromised in terms of design and build. In particular, it’s very not-square which means various parts are uneven (you can see this if you look closely) and I made it using a base frame (which was itself a mistake) and I had to use much thicker wood for that than I planned due to supply issues and so it’s super-heavy… far too heavy.

So I’m rebuilding it from scratch right now, and incorporating the lessons learned to make it better this time around. Here’s current progress: 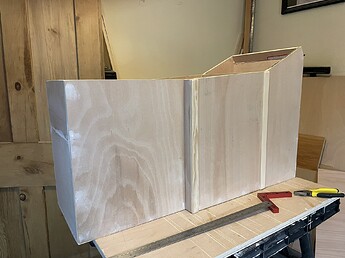 Should be done in a few weeks. Meantime I can fly with the current one. I’ll post some pictures when it’s done… again.