How do I show FPS, Temperatures, etc?

How do I show my FPS, GPU/CPU temps, etc in the cockpit?
Thanks.

Actually I am amazed no one (that I know of) has come up with a mod that can display such temps on the MCU or in the EFB, or even just the clock. Also I imagine the fps could be incorporated into the chase camera HUD without the need for dev mode.

Or why it’s not built-into the Xbox Game Bar performance monitor. 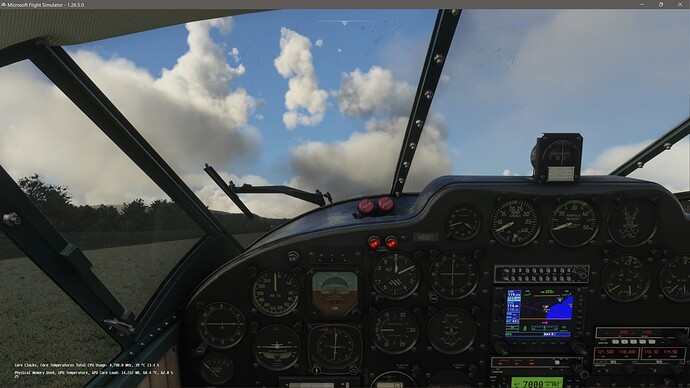 Thanks. I may give that app a try. Since ppl here are always talking about the FPS they are getting (or not getting) I assumed there was some way built into the sim to do that–al la X-Plane 11.

Yes, there is but it does not display the information that you say you want.

The in-game monitor can be accessed by selecting Developer mode.
You can then choose the frame rate counter from the drop down menu.
It is extremely intrusive.

The simulator only monitors itself, you are asking for software that does not monitor the software, except for its frame rate, but does monitor the hardware.

HWiNFO monitors the hardware and RTSS displays the frame rate and hardware data in the software screen.
You can choose as much or as little data as you wish.
It works for many other programs as well.

Ah, right. I see what you mean.
Thanks.

There is the Xbox Game Bar — Win-G — that has a Performance monitor that can be pinned to remain visible after the bar is dismissed. It doesn’t show temperature, but does show CPU usage, GPU usage, VRAM usage, RAM usage and FPS.