How do we align the papi lights?

As soon as you have two white / two red you are at the correct height. Now you need to maintain the correct glidepath.

Using instrument references you could maintain a vertical speed equal to groundspeed x 5 (e.g. 100 kts = 500 ft/min) and then adjust to maybe 300 ft/min when becoming low or 700 ft/min when high. This is the technique you would normally use when transitioning from IMC into VMC, slowly transfer your attention more and more towards outside references as you come closer.

With some practise you’ll be able to fly 2/2 all the way down to the aiming point markers. The PAPI, just like an ILS glideslope becomes more sensitive when you get closer so it becomes much harder to follow. Following the ILS glideslope or PAPI you will cross the threshold at 50 ft, over the markers you will start the flare and touchdown after. 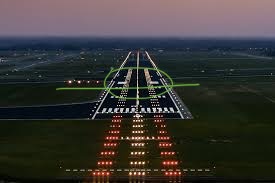 You could, but you won’t learn much from it. It might give you a sense of what a normal approach should look like. Otherwise its just a lot of practise. Easiest way is to really focus on the aiming point markers and nothing else, you will be able to see immediately if you are flying straight towards it or under / overshooting.

There was a discussion before about landing techniques in the forum and I decided to check what I am actually looking at and focussing on during landing, this happens subconsciously after so many years, I thought I might have adopted some techniques or habits I wasn’t aware off.

I found that after flying for 12 years of flying professionally. I’m still doing exactly as I was taught in flight school. On final approach crosschecking between speed and aiming point, far out or in less then ideal visibility maybe a crosscheck with vertical speed. Then focussing towards the end of the runway upon starting the flare. I have been an instructor before so maybe it became hardcoded

It used to be hard for me too. However, since I have been using VR it is so easy.

Thank you so much for thinking so well. Will I have to learn a lot from here? I also want to learn to read charts

This is exactly why real pilots practice approaches almost endlessly in the real world. It’s a skill that must be continuously sharpened. Once you know how to trim out the plane for the approach, use the throttle to adjust your position within the PAPI beams. If you have three-four reds, gently increase throttle instead of pulling back on the controls. When you’re at final approach speed, pulling back without more throttle can easily slow you down to the point of stalling.

I wrote a how-to guide on proper approach and landing. It also describes the mentioning pitch = speed, power = path method. this method is a little out dated though, its also not transferable onto larger aircraft.