How do you prevent the 787 batteries from dying mid flight?

First sorry if this isn’t the right section. How do you prevent the 787 instrument screens from going black mid flight, I was flying from Guam to Tokyo Japan, about 2 and a half hours in I began my decent, then all the instrument scenes went black. I’ve seen a few posts saying that you need to charge the batteries so how do you do that? Don’t want to report something that isn’t a bug

Definitely not a bug, it’s most likely because after you start your engines, you’re not selecting the generators to turn on for each engine. I could be wrong in the words I’m using, but check out a few YouTube vids on cold/dark start up for 787 via MSFS and you’ll see exact steps.

I’ve seen a few posts saying that you need to charge the batteries so how do you do that?

They’re having a laugh at you buddy. One does not simply “charge” the batteries for a multi-million dollar long range aircraft like you might your phone.

assuming you’re not using the Heavy Division mod, ensure the APU is running prior to engine start. This should kick on the generators once the engines are going so the aircraft can run on generated power vs the APU or ground power.

My experience with the 787 (stock, no mods) is that you don’t need to explicitly turn on the generators and it’s not part of the in-sim checklist (have no idea about the real thing). They are on by default (bottom) so unless you explicitly turn them off you shouldn’t have to worry about it. Never been an issue for me (although I don’t fly 787 often), so if you didn’t explicitly turn the generators off there might be something else going on. (Just saw post above - yes, make sure your APU is running prior to start engines - that IS part of the checklist).
Fun to read a bit more about real 787 electrical here 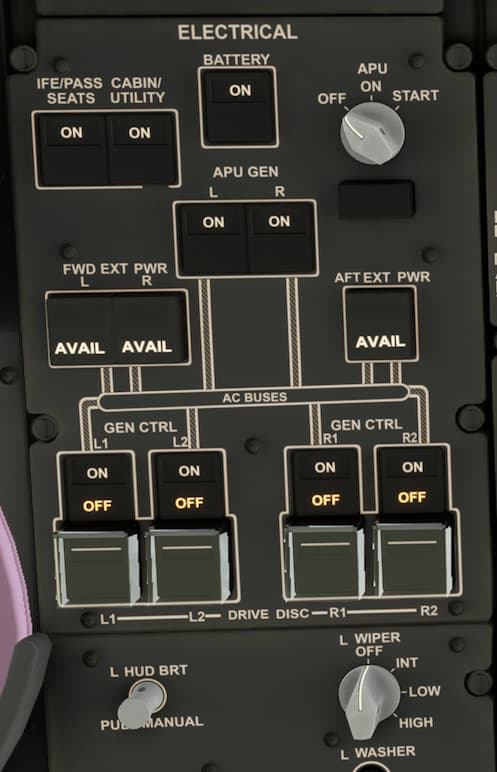 What you have been reading is in regards to smaller aircraft that have a starter switch that stays in the “Start” position when turned there.
Leaving it there will drain the batteries and cause the plane’s electrics to shut down.
That does not happen in real life.

It’s not your batteries is a bug to do with memory running out. To prove it save your flight when the screens go dark then reload msfs and reload your flight. Boom, screens are back.