How much to upgrade from standard to deluxe/premium versions?

Are there any details how to and how much it would cost if you purchase the standard game edition and later decided you wanted to upgrade to deluxe or premium version?

I see on FAQ it says

Q: Will I be able to upgrade editions?

A: Yes it is possible, but the most cost-efficient way to purchase Microsoft Flight Simulator is to buy the edition you are interested in.

But it doesn’t provide any more details.

But it doesn’t provide any more details.

“The most cost-efficient way”

That means, if you upgrade, it will cost you MORE than if you had simply purchased the top version immediately.

Well yeah, but that’s not very detailed. I’m asking if anyone knows specifically how much more.

I’m asking if anyone knows specifically how much more.

Do you own any version? I’d guess if you did, and tried to upgrade, it would tell you, then you can add ver1+ver3 and figure out what the cost is vs. ver3 directly?

No I don’t, I’m trying to figure out which version to buy before buying it

I believe I head somebody say that it’s $89 to upgrade from standard to el muy macho, as opposed to $60 to buy it up front.

Hey there! There are three upgrade packages available in the Marketplace.

All prices are listed in USD

I purposely did not include the Premium Upgrade Package, as I and many others are slightly confused on the pricing as it retails for more than the Premium Deluxe version. If would hold off on any marketplace upgrades until we get an official answer on this. It seems they are reversed or have the wrong information in the details section. Hope this helps!

Check out this thread for more details on what I am referring to here, in regards to a potential mistake in the Marketplace.

Those prices aren’t correct - there’s other threads with people having the same issues. Something is going on with the upgrade pricing.

Yeah, we will wait for an official answer or update to the pricing system. It’s definitely incorrect.

Does anyone know if there will be an opportunity to get just the planes in Premium? Assuming as in FSX to get them as addons?

Hey @CaptKirck! Welcome to the forums!

I haven’t heard anything regarding upgrade packages for just aircraft, so its still up in the air. Pun intended!

No official respond yet on how upgrade to premium with out pay full price?

For me it is OK, but upgrading to premium/deluxe cost 72€ 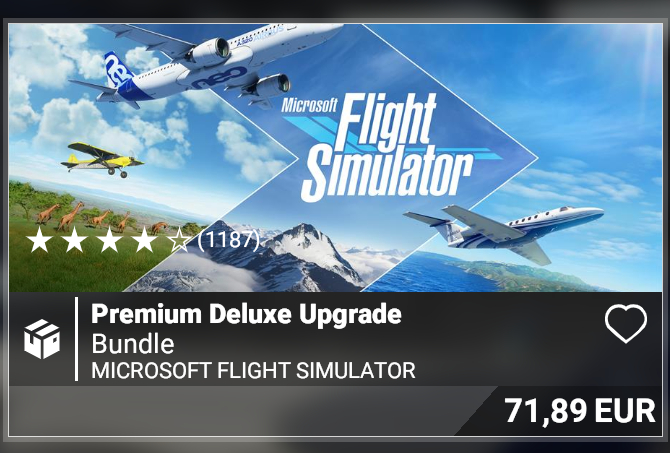 It is out of the question that I will be robbed of 20 €, I will not upgrade until they do not match their prices.

Same here in the U.S. “Upgrade” pricing is WAY too high! Originally I bought the standard because the default aircraft were so very sub-par in past versions. Now that’s I’ve seen the 152, I would have upgraded. However, at these prices, I’ll just go with 3rd party aircraft of the ones I want. For example, I love the 172. A2A Simulations makes a fantastic one for FSX. I’m hoping there’s a version for this sim as well eventually.

I was fine with paying the extra $25 to go from Standard to Prem Deluxe. It was my choice to be cheaper going in, so I can check it out and see its potential before going all in.

Once I saw how much fun I was having and how much I’d be using it, figure I’d get the upgrade because 1) I wanted to enjoy the extra stuff, 2) wanted to get it before they realize Premium Deluxe with 10/10 is cheaper then Premium with 5/5 and maybe change the price worse. Was I thrilled to “pay $25 more then I would have had to”…not really, but is it worth it it? Sure - why not.

After update the price are always more expensive for upgraded versions…

I had opened a ticket for that and I received an answer: displayed prices are correct!

Thanks for the info, I won’t upgrade.