[HOW-TO] How to Land

After turning from base to final, your first task is aligning to the centerline of the runway, pointing to the aiming point (which should be around 100m or 330ft before your landing goal) and start looking at your speed. In the final, you should have full flaps out, gear down, and in case (depends on the aircraft) set the carb heat off, full RPM (not full throttle!), mixture full rich.

Usual speed for small aircraft in final should be around 60-65 Kt. In case you have gusts / front wind, you must increase a bit your final speed.

Till you reach the idle gate, you will have to fight between your glide angle, the aiming point, your speed and of course keep the center line of the runway. Therefore check each points one after the other and start again. If your speed is too fast, reduce the throttle and nose up a bit, if your speed is to low, increase your throttle and nose down a bit. You should really fly to your aiming point till you transit (or flare).

Around 200m or 660ft before your landing goal, you will reduce your throttle to the min, which means idle. However you will continue to fly toward your aiming point.

While general aviation (small aircraft) do not really flare like bigger aircraft, you will still change your attitude at around 2m or 6ft from the ground. That means before you was flying toward your aiming point, now you will look at the end of the runway and fly basically flat. This will reduce further your speed till your touch down.

In this phase you keep your eyes on the end of the runway, and you will flare as much as possible without having your airplane going up. Ideally a good flare means you have your stick fully pulled at your touch down. Even after the touch down you must continue to pull the stick otherwise you risk to hit the nose / propeller.

Not a good landing? Go around!

In case you see you don’t land near your landing goal just go around: full throttle, increase your speed above Vx, flaps up at least 1 notch, and start climbing. A landing must be after the threadhold, and within 150m / 500ft of the threadhold. In bigger airports the landing point for smaller aircraft can be further down the runway, that would be described in the airport information sheet.

Just for info, that’s how a real landing look like: 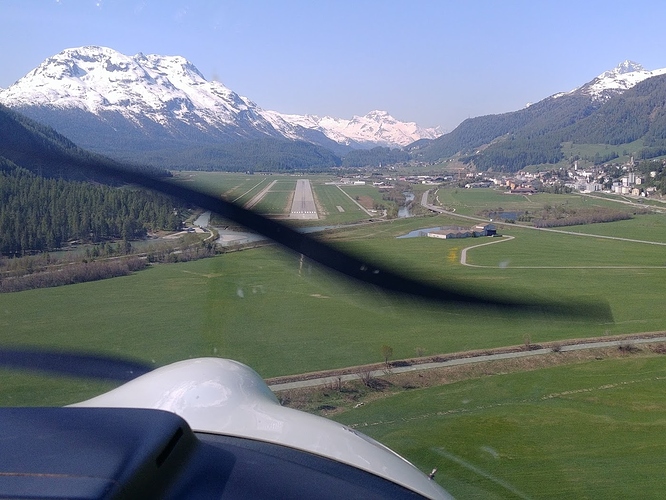 landing1403×1052 387 KB
in this case my airplane was a bit right of the centerline at this point. Aiming point would be around the river in front of the runway, and the idle gate before the small road just before the river. (the black strip in the middle of the image is the propeller seen by the digital camera)
18 Likes