[HOW-TO] Line-up and take off

@bertrandch
I don’t know where you’ve got this wrong info from, but only very few twins have counter rotating props and e.g. none of the default MSFS ones, neither the 350i, the B58 or the DA 62 does.

Its not the physics, its a bug since a few updates ago. Because i still have the same problem if i put the wind on 0. And once i am in the sky it is just going straight.

This is not dependent on the wind but due to p-factor and torque: Understanding Propeller Torque and P-Factor - FlightGear wiki

Now it can be that the effect has been increased in the latest versions, but in the real world the effect is really mostly seen while starting and landing.

Just to make sure p-factor etc. doesn’t have an effect during landing (idle).

Crosswind doesn’t have any effect on an aircraft once it is in the air, except for ground track and ground speed, which has nothing to do with aerodynamics, performance or handling.

What can be the issue?

Probably not the right place but your how-to-land guide contains a lot of inaccuracies or plain incorrect techniques. On top it seems a lot of it is based on one particular type of aircraft and isn’t necessarily transferable to other aircraft. I have written this how-to in response:

P-factor has no effect during take-roll for most GA aircraft as the aircraft attitude is more or less level (it may apply to taildraggers), the main propeller effects pulling the aircraft off the runway are slipstream effect and torque, P-factor usually only comes into play during and after rotation.

I meant the physics of how a single engine prop plane works (I can only answer this one as these are the only aircraft I have flown in real life) nothing to do with the wind. I guess it would’ve helped if you had of mentioned what aircraft you were having trouble with, my bad for guessing it was a single engine.

Reaching VRot (rotation speed) you pull the stick to climb and wait that your speed reaches Vx in a stable way (Vx and Vy are values defines in the AFM).

Why would you climb at Vx? In case of obstacles after take-off, then sure. But then you would apply full power BEFORE brake release so it seems this is not what you are describing here. Climb-out technique should be depending on the situation, using Vx limits engine cooling and forward visibility, when not necessary for terrain / obstacle clearance its not advisable.

you should reduce RPM as soon as you are clear of obstacles (50ft or like 10m) for noise reduction.

Noise abatement might be a nice side-effect but its not the reason for reducing RPM after take-off. Usually you reduce power (MAP) after take-off to decrease engine wear, as speed increases the propulsive efficiency reduces and a more coarse pitch is required, a constant speed prop partly does this automatically by maintaining prop RPM, reducing the MAP requires a further reduction in RPM to AFM value to maintain efficiency.

This is definitely not done at 50ft! So low to the ground you should focus on flying the aircraft, not on “noise abatement” with the risk of pulling the wrong lever.

Rather at 500 ft or so after flap retraction, reduce MAP to climb power -1 inHg, then reduce RPM to required RPM. As RPM is reduced, MAP will increase slightly (usually by 1 hPa).

No that works great by me… I captured it on youtube: t7GIQ7k8fXY

@ Nijntje91 => Sorry but I don’t know where you fly. Here in Switzerland where you have a lot of town / construction just around the airfields those are the rules:

Landing a boing or a small aircraft could be thought as the same (due to the physic laws) is actually again done differently here in Switzerland. And yes I’m a PPL and know pretty well how to fly a small aircraft no clues really about big one.

Again the rules here in Switzerland are by far not the same as in the US, for example we aim at a point BEFORE the runway, where I know that in the US you tend to leave at least 1/3 of the runway. Why? Because our runways tends to be all on the small size if not even just on the limits of the aircrafts. Therefore if you aim differently than before the runway itself you risk to not be able to land safely.

Is that inaccurate or wrong? Well, I see that the rules applies here, and may vary from country to country, why not simply tell us how you learn in your country

1.Here in Switzerland where you have a lot of town / construction just around the airfields those are the rules:
Vx till you reach a stable speed and at least 50ft
Vy afterward

3.Again the rules here in Switzerland are by far not the same as in the US, for example we aim at a point BEFORE the runway, where I know that in the US you tend to leave at least 1/3 of the runway.

1.I’m surprised. Can you confirm that these ‘rules’ are actually written in the Swiss AIP and apply to all airports/airfields in Switzerland?

2.As a pilot could you please spell Boeing correctly!

3.I don’t understand the second part of your sentence, but concerning the aimpoint, that’s not a rule but basic airmanship when operating short runways around the globe.

So you have written a how-to for Swiss pilots? Rules, procedures and techniques in Switzerland aren’t any different from other EASA member-states as far as I’m aware.

Of course when there are obstacles/ terrain you perform a short field take-off (full power before brake release) combined with an obstacle climb (Vx). What do you mean with “Vx until you reach a stable speed”? Are you maintaining Vx or not?

If the field length is short you perform a short-field landing, meaning touchdown at the beginning of the runway and apply maximum braking. This does not mean those techniques are standard, you should title your how-to’s how-to perform a short field take-off / landing perhaps.

I can tell you this for sure, for noise pollution, this obstacle climb to 50 ft makes absolutely no difference. Also I was referring to the reduction in RPM at 50 ft, I don’t know who taught you that but that is a completely wrong technique and doesn’t fit with any noise abatement procedures or obstacle climbs.

By not aiming 300 m (not 1/3, its 300 m) from the threshold you risk undershooting the runway, its not a US thing, its world wide. When following the PAPI or ILS glide slope all the way to touchdown, guess where you will end up. A big airliner performing an autoland also ends up 300 m down the runway. Of course see point above if the field length is known to be critical, its again not the standard technique. 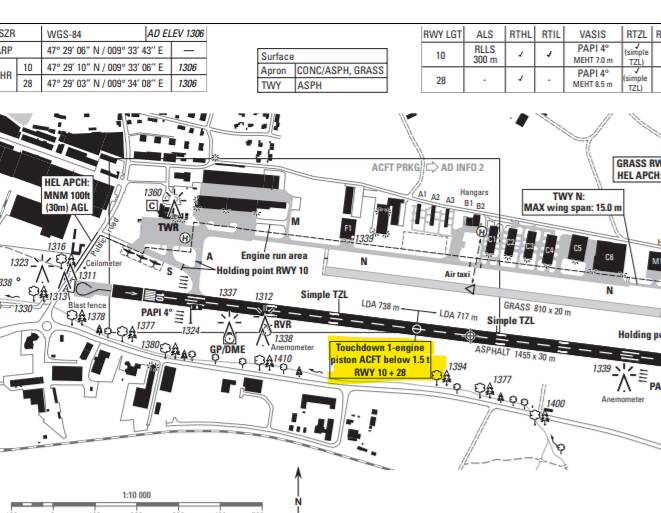 In which case you must land there 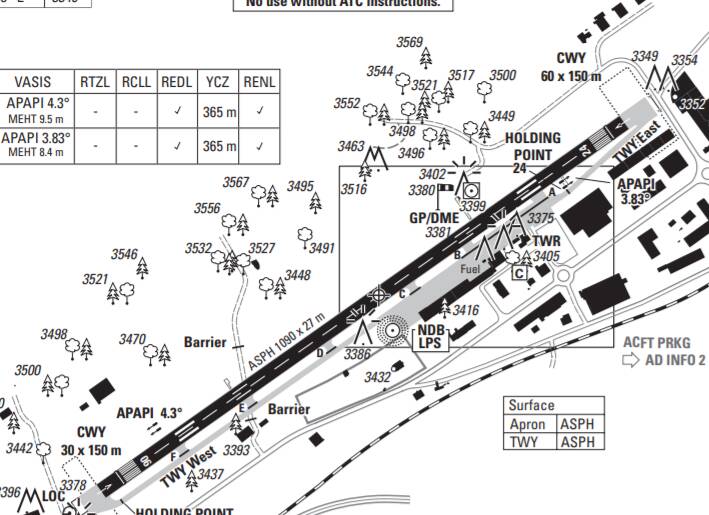 Then you must land just after the threshold.

@Nijntje91
Applying full breaks? We never do that to avoid to blow our tires.

Those are the standard we are trained here. Not special for us. As I said, if that’s different in your country, then sure, let’s change the title and specify where it applies / when it applies.

For the Vx / Vy rules => our training is the following (for example on a Katana DV20). Full throttle and full RPM at start (around 2500), once we lift off, we aim for Vx speed. Once Vx is established (which means we have at least Vx stable), we reduce the RPM (around 2400). After 50ft (or clear of obstacles), we set the flaps up, remove the fuel pump and aim for Vy. Once Vy is stable, we do the climb check.

While the rules should be standard, across at least most of the world, there is differences. Even for example in the radio. In Switzerland you don’t do an initial call while contacting an airport only for ATC. In Germany you always do. In Italy you must be all the time in contact with the ATC while flying over the country and call them at least every 30 min.

1.I don’t see how this ICAO document applies to all Swiss airports and it doesn’t even mention Switzerland?

I don’t see Vx, or Vy mentioned anywhere in the LSZB NAP?
The NAP even mentions that a rolling take off shall be executed which somewhat contradicts a climb at Vx. 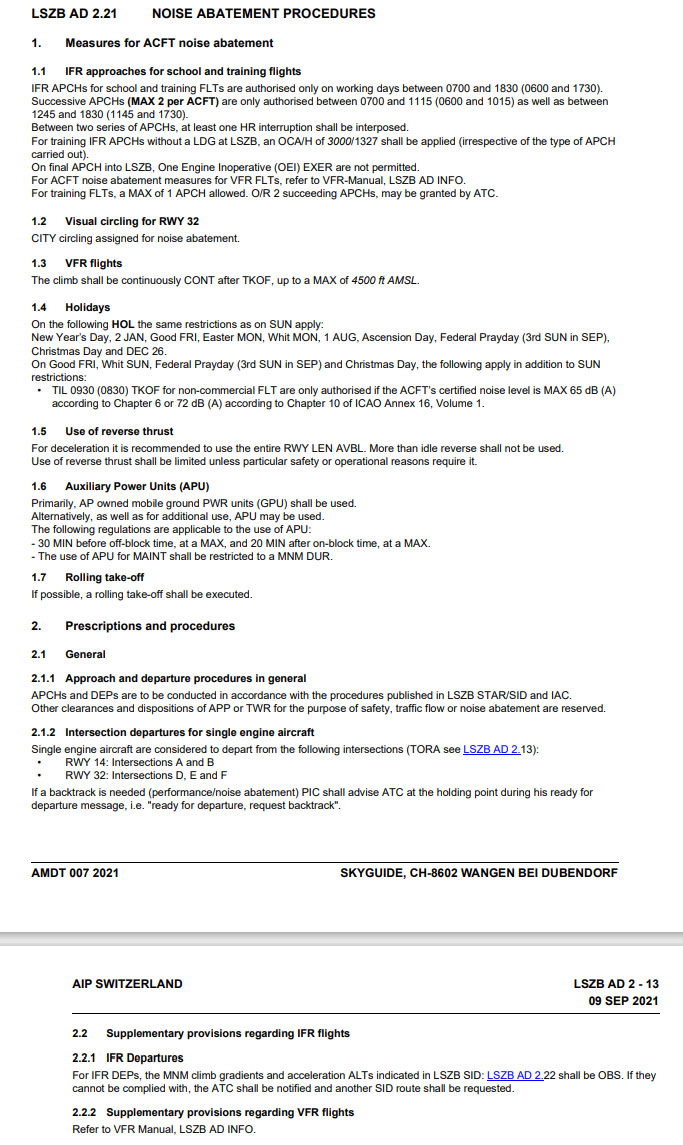 Can’t tell you why it is not fully and clearly documented. Maybe it’s a “nice practice” but as there is no official rules about it (at least yet) or it’s quite difficult for anybody outside the aircraft to evaluate it, they simply not put them in the official documentation. But I can tell you that all the IF here around do tell you to do that kind of procedure.

Google translate says:
“In Switzerland, noise pollution is legally regulated by the Noise Protection Ordinance. Bern Airport, the airlines and pilots are required to provide various measures and training courses such as B. to promote noise courses, noise-reducing behavior (e.g. flight route, climb / descent). Periodic noise measurements show that the limit values are being adhered to with clear reserves.”

As you wrote, it’s just a ‘nice practise’, which means it can only being used by local pilots.
In fact, LSZB doesn’t even seem to have a specific NAP.

Yes I meant maximum safe braking obviously. I’m flying all over Europe, a landing or take-off is not different all of a sudden from one country to the next. Sure one airport might prescribe NADP 1/2 or A/B for climb-out but otherwise no different.

It seems to me you are specifying your writings to one particular aircraft type (DV-20), do you have experience flying any other aircraft? I personally have flown a lot of GA aircraft, the DV-20 is not one of them. Those procedures sound really odd to me, I have never flown any aircraft where you fiddle around with speeds; flaps, pumps and power settings at 50 ft screen height. Especially flaps-up at 50 ft?! Never heard of that.

Edit: I just looked up a DV-20 POH, no idea if it is the right version. I think this 50 ft is taken too literally. It mentions 50 ft as a note regarding obstacle climb only. It doesn’t mention anywhere to retract flaps and reduce RPM at 50 ft, instead it states “at a safe height”. 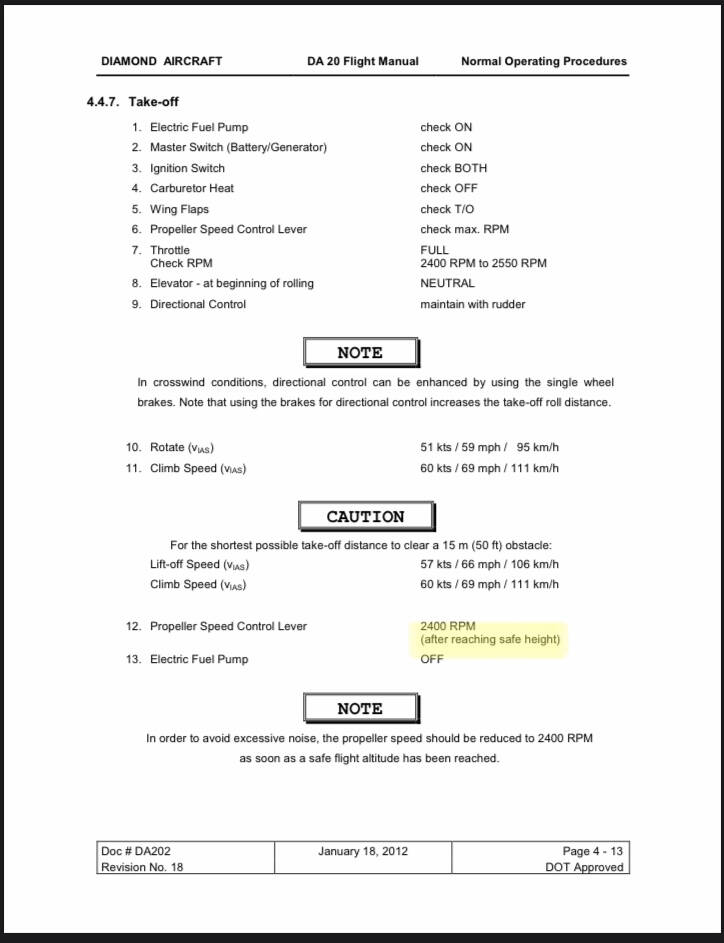