Sorry, I don’t get it. Is anyone here able to set up the classic key assignments how they were in the past, “TOGGLE LIGHTS” → “L” and “TOGGLE LANDING LIGHTS” → “CTRL+L”?

Whenever I do this and try to toggle the landing lights, this sim will interpret the “L” press as an individual event, hence triggering the “TOGGLE LIGHTS” event. I can’t get this to work.

FYI, I did try to set up those key strokes in the first and in the second column and vice versa within the control settings, and yet it behaves as descibed.

Were you able to replace and validate the default commands with the L and ctrl L ?

Yes. Technically replacing them within the settings isn’t the problem. The issue is what the sim interprets when you hit “CTRL+L”. First it seems to interpret the correct thing, but then it will also trigger the event that is tied to only “L”. I guess it senses “ok, CTRL+L is pressed” but at the same time “alright, L is pressed”, which is technically correct but completely useless. I want to trigger both events seperately with those key commands. That’s what I can’t get to work no matter what setting I have tried so far.

That shouldn’t happen.
Could the issue have anything to do with left or right CTRL?
They both are different commands. 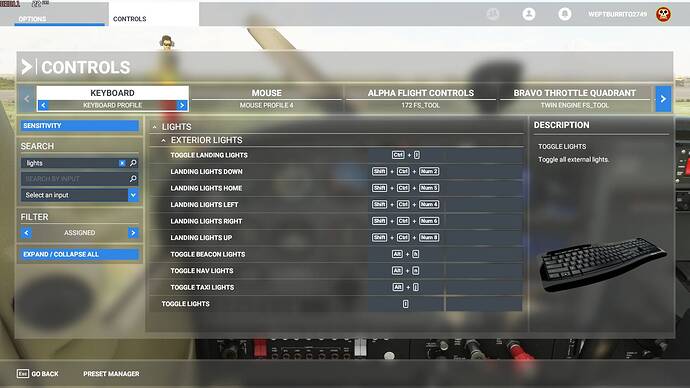 Did you get it fixed?
Is your issue similar to this?

Well if you are on synapse, check the keyboard tab and turn off gaming mode. I assume it would be the same on other brands as well.

Having a similar issue… there’s been a recent add-on, still trying to limit it down and single out which one it is but hadn’t happened until I bought the Kodiak 100 addon and a few adding in the Greece/southern Italy region of the world. Basically, landing lights will be working fine and then once the add on is entered, regardless of what my bindings are, I cannot correct the angle direction of the landing light. I’ve tried binding, unbinding and the only fix has been to delete the “reserved space” which I would assume is similar on Xbox to the community folder on a PC and then begin reinstalling add-ons 1 by 1 until I get the most installed without running into the problem again.