I am currently writing a web app that reads .pln files and enables the user to add more information and then print/save a PDF flightplan. (Also recording the flight via uploading a GPX track amongst some other things).

I’m currently iterating through a .pln file and reading the waypoints. My question is; are the ICAO idents unique in the word? For example below is an intersection:

Is it likely that this ident is used/replicated elsewhere?

The reason I ask is that I’d like to keep my database clean and only add a waypoint once in the DB if it exists rather creating a record unnecessarily.

I would imagine there is probably only one Nedul in the region EG (England?) rather than the whole world??

Many thanks for any pointers

No, waypoints are definitely not unique. If you have navigraph, you can search for waypoints and you’ll often get a list of identical waypoints - the lat and long will be unique, but the name can be identical.

Not sure about regional uniqueness- maybe a pilot will drop in and tell us both.

@jonasbeaver, @Coppersens, @anon50268670 Can I steal some real aviation knowledge?

As far as I know the idents should be unique if you combine them with the region, which is why some avionics show the region in the dialog if you enter an ident that has duplicates.

But don’t take my word for it, it’s just my sim experience.
Our FMS nav databases on the airliners are geographically reduced and with airway information the ident in an FMS route is unique.

The duplicates page of the FMS in airliners doesn’t show the region but instead distance and coords (page 30):

The example “ECHO” there is pretty good, Skyvector knows 5 of them around the world.

For GA I only know about the region display to distinguish them, but not sure if there are some edge cases where this still leaves duplicates…
I’m 100% sure, @albar965 knows these details, especially in terms of Flight sim databases.

Reading the ICAO docs about the 5-letter idents:

3.3 The name-code designator shall be easily recognizable in voice communications and
shall be free of ambiguity with those used for other significant points in the same general area.

The wording “same general area” is the culprit, technically it would allow the same name in a different area of the same region code, I’d think. But maybe there are more detailed superseding regulations in the countries governing the uniqueness…
“significant point” is just the formal (more general) name for waypoints in this case by the way.

ICAO Standard
http://skyrise.aero/wp-content/uploads/2017/03/ICAO-Annex-11-Air-traffic-services.pdf
(not a government website, but an easy PDF to read and still current)

2. Designators for significant points marked by the site of a radio navigation aid

2.1.2 In selecting a name for the significant point, care shall be taken to ensure that the following conditions are met:

a) the name shall not create difficulties in pronunciation for pilots or ATS personnel when speaking in the language used in ATS communications. Where the name of a geographical location in the national language selected for designating a significant point gives rise to difficulties in pronunciation, an abbreviated or contracted version of this name, which retains as much of its geographical significance as possible, shall be selected;

3.2 This name-code designator shall be selected so as to avoid any difficulties in pronunciation by pilots or ATS personnel when speaking in the language used in ATS communications.

3.3 The name-code designator shall be easily recognizable in voice communications and shall be free of ambiguity with those used for other significant points in the same general area.

That is what I know on the legal end with ICAO and the FAA, basically the international law says they can’t sound similar and be close together, but each country can choose what they do otherwise. Most countries choose unique fix names within their borders. I’m not sure how Eurocontrol handles fixes across Europe though, it may be unique in the whole economic zone?

In 2010, during Donald Trump‘s popular TV show, The Apprentice, three fixes near Palm Beach, Florida were named after him: DONLD, TRMMP, and UFIRD (pronounced You-Fired). An arrival procedure, IVNKA ONE, was named after his daughter.

There’s no doubt The Donald stirred up controversy during his presidential campaign. It’s rumored that some pilots were refusing to fly the IVNKA procedure or use the Trump fixes. In July of 2015, the FAA determined that Trump was too controversial and renamed all Trump-related navigation names. Sorry, Donald… You’re Fired!

Also look at the RNAV 16 at KPSM 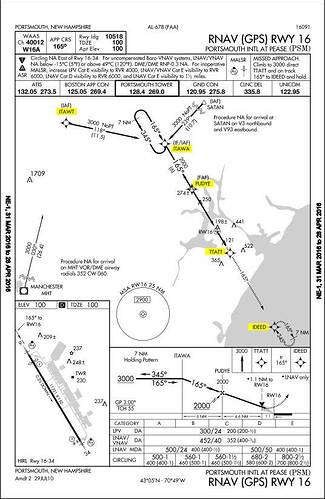 I remember doing an ILS late at night during ifr training into KMCO and all the fixes are disney related as well. There’s not much, but there is a little humour in aviation!

I missed your post, sorry to repeat what you already had!

They definitely get repeated, but unlikely in same region. Many avionics setups provide lat/long to make sure you choose the right one in case of conflict.

Thanks all, that’s definitely answered my question and amazing depth into the subject too! Really, thank you!

I think in my case I will write a function that checks the IDENT ID and the Lat/Long. If it doesn’t exist I will add the waypoint to the database, if it exists I will use it’s DB ID in my flight plan.

I’d always try to match by coords as well but in a fuzzy way (using a tiny range to avoid floating point comparison).

Thank you, especially for that last tidbit re IVNKA… Glad to hear!