Post edited for clarity: There is a big difference in download speed when installing the main large MSFS2020 installer, and the World Update installers. I assume this means they are on different servers?

The main MSFS2020 installer (on Xbox, Marketplace) is about 130 GB and takes about 1 to 1.5 hours or so to download and install on a 1 Gbps connection. But the World Updates (1 to 11) take all day - they are smaller, but download at a much slower speed. I’m not sure what the reason is - perhaps they are on different servers? Would it not be better to post them to the same, faster servers as the main installer? Practially speaking, it now takes a full day to install MSFS, when it could be reduced to 2-3 hours.

Thanks for considering the request.

Interesting. Was this a 40th-aniversary edition install? I’m trying to determine how long a brand-new install from the marketplace would take to complete over a 50 Mbps connection.

Do you know what the total download size of the World Updates 1->11 was?

I had thought that a brand-new 40th-aniversary edition install would be around 150-170GB, but if it does not include WUs, it could be much larger & so take over a day or more at 50 Mbps.

That’s a hard question to answer, because the sizes in the Xbox > MSFS > Marketplace > Content Manager don’t add up. If you select one, say “World Update XI Canada” it will say 8.88 GB on disk, but when you select it, lower on the screen in the progress it may have a different size. I assume the files are compressed for downloading, then decompress on your system and end up larger. Right now I have:

In the middle of downloading WU 10, and the total (including the above) seems to show 175.9 GB on disk in the Manage Game section of Xbox…

Separately it lists “Saved Data” of 80.5 GB, and I think that is the World Updates plus Rolling Cache (which seemed to be set ON at 8 GB upon install.

Regardless of size, the World Updates are significant - but my complaint is that while the main installer will download at about 300 Mbps, the WU files go from about 5 Mbps up to about 40 on average - a few jumped up to 100-200 Mbps in the middle of the night, so it might be time dependent.

It could be different servers, but you also need to take server load into account. Want the update on the day it drops? Join eleventeen bajillion other users trying to do the same thing. This is exactly the reason I wait until the weekend to run my updates.

I don’t download on the first day of anything. I’m doing a full reset today - and have done about 6 or 8 full resets in the past 6 months (as part of beta testing and troubleshooting).

There is a big, consistent difference in download speed of the full installer (which is very fast) and the World Updates (which are very slow). That’s all I’m saying. The WU installers could / should all be on the same fast distribution server as the main installer, separate from the “simming” servers and load (it seems to me).

Thanks GimbalAxis - that reply is most useful. I plan to install MSFS on a separate D: partition on a new 1 TB SSD - dedicated to MSFS - that I plan to purchase. I’m hoping that (excluding the boot & system restore partitions, which will be auto-generated), giving 150 GB for Win11 itself on C: will leave around 800 GB for MSFS. If MSFS base & world = ~ 130 GB, and I allow another 70GB for future mandatory updates & WU growth, and if I give 20GB to the rolling cache, that allows ~ 680 GB for the manual cache & addons, which I think should be enough.

Beechc23 has a good point. Another factor could be exactly when each of the downloads is uncompressed to it’s storage location, as well as what “processing” needs to take place.

For example, for the core install, the installer might download the entire app to a temporary location, and then decompress it to it’s final location, or, alternatively, decompress & write to file while downloading. In either case, it is likely just writing the decompressed files directly to an empty directory on disk without further processing.

For the world updates, there is an additional step (I guess) of replacing bits of the core with the updated data, including finding, analyzing & modifying configuration files and the like. If this is happening during the download - as opposed to downloading everything to a temporary location first & then starting actually updating stuff, then I could see delays as now you have multiple threads trying to write to disk - one or more for the downloading data, one or more for reading data to see what needs to change, and one or more for writing the decompressed data to disk.

So, the bottleneck might not all be due to the network or network servers. it could be disk (particularly if a HHD), memory or CPU contention, depending on your PC’s specs & how the installer is coded.

But without network traces, or CPU, Disk or Memory monitoring logs this is all speculation on my part. However, I do think trying to create an installer than can run optimally on a huge variety of different PC specs & network connections (download speeds, latency, etc.) is no easy thing.

I do agree with you that 24hrs is a very long time. Makes me wonder how long my download will be!

Here’s the bizarre contradicting file sizes that make it impossible to figure out what the real sizes are… This is on Xbox X, after a fresh install of MSFS2020 v1.29.29.0 but I’ve noticed (and asked about) it in the past. I think they just need to clarify the wording, I’m guessing 1 size is compressed (and thus the download size) and the 2nd is the uncompressed size that will be required on your disk. 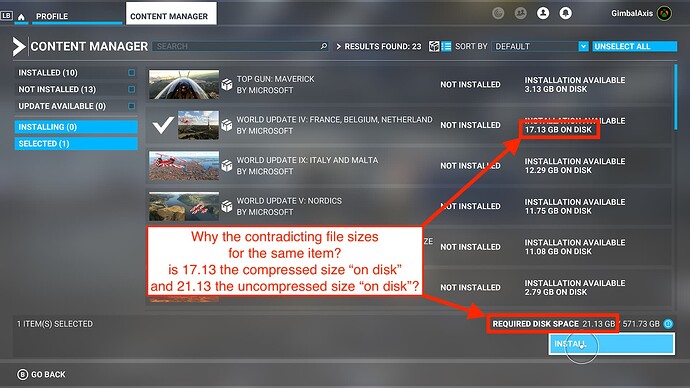 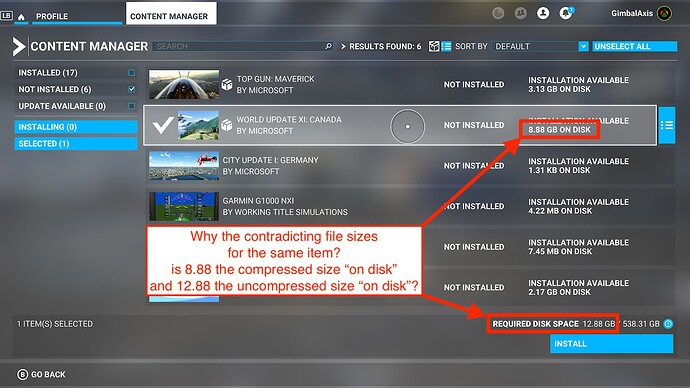 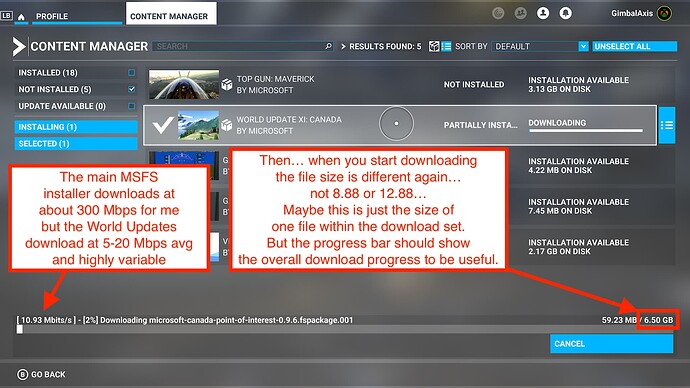 I believe from watching the description of progress in the lower part of the screen that:

It downloads 1 compressed file at a time
Fully decompresses that file before proceeding,
Downloads the next file,
Fully decompresses … repeat,
When all files are downloaded and decompressed, it assembles and moves in the files to the file system (as there is a cleaning up stage at the end)
So that process doesn’t limit the download speed of the individual files, which is highly variable - indicating they are on the MSFS servers that are under load from people playing the game, as opposed to the Xbox marketplace game distribution servers (which are very fast compared to this, and of course have other games too)…

Ahh - I see what you mean. These pics make your original post much clearer to me. I’ve never had Xbox but am guessing you don’t have the tools to look at what is actually going on during download / setup or what’s actually stored on the hard drive. My guess is that the:

“Required Disk Space” is the space required for

“Installed Disk Space” is the space for the final file(s), once processed. These files may or may not be compressed (an earlier version of the franchise, called “Microsoft Flight”, stored virtually all of it’s files on disk as compressed, decompressing the required files during gameplay as required)

The 6.5GB I think refers to the size of the download.

The bit on the left showing what’s downloading does suggest that they are not downloading multiple files simultaneously, but sequentially.

I agree with your thought that the screen indicates a “download, decomp, repeat, then process” model, and I agree in such a scenario that one would think your download speed for each file would be much greater for your bandwidth than what you are seeing.

I’m not so sure about the WU files being on XBox game servers vs. distribution servers - that makes no sense to me. Perhaps there are other factors at play here that neither of us has thought of, such as bandwidth throttling by your network service provider, but 1 Gbps to 10 Mbps seems exceptionally excessive, if it were occurring, so I doubt that’s the reason either.

So, while your information has been really useful to me in my planning, I’m afraid I’ve been very verbose, but of little use to you in solving your problem.

On Xbox X, you go to the Xbox Marketplace and choose MSFS (and other games).

Total size including “offline world” is about 130 GB, and average download speed is about 300 Mbps sustained, install takes about an hour.

But the World Updates, which total somewhere around 60 or 70 GB (I can’t be sure with the contradictory sizes shown in the Content Manager) takes about a day to download, averaging about 10 Mbps. They are obviously on MSFS servers, not on the Xbox Game Pass servers. It’s too bad, because there are so many updates and they are so large. Moving them to the Game Pass download servers would speed up download for installation, and presumably free up server bandwidth for those actually playing the game. 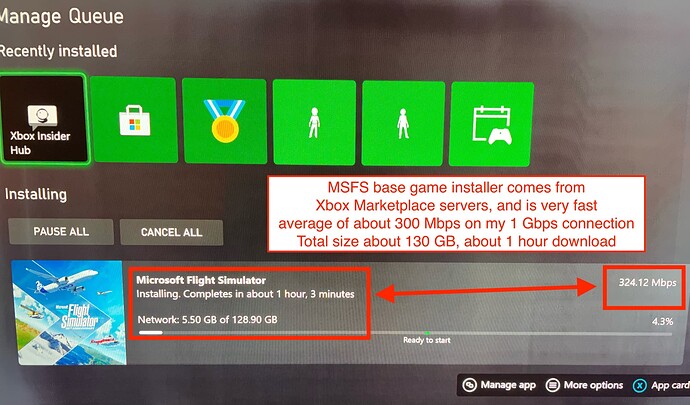