Well put @PZL104. When your instrument panel looks similar to this forum background during daytime, you do not need screenshots! Cheers.

This overexposure of the horizon when in cockpit view is indeed a problem. There should be an option to turn this of or tune the level of HDR/exposure. 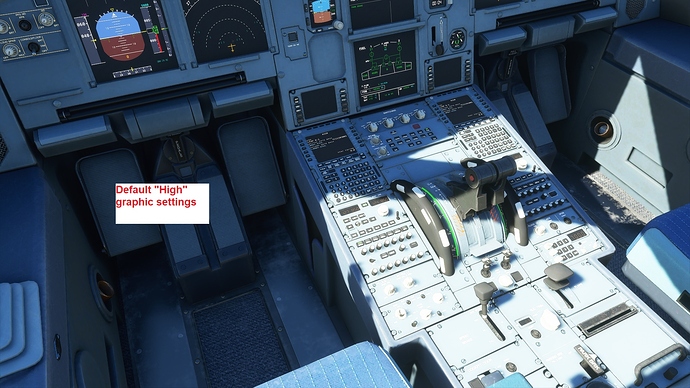 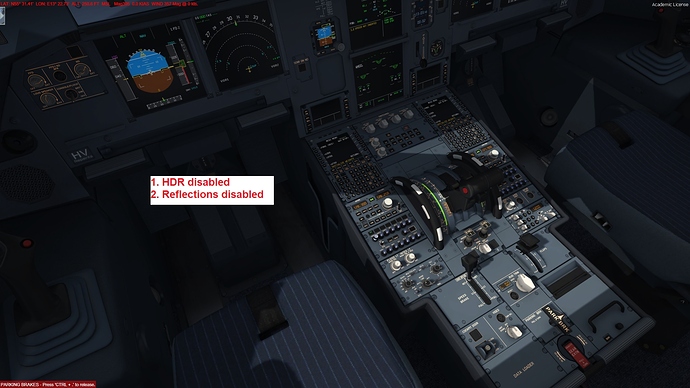 Note: This issue has also been submitted directly to the “Bugs & Issues Help desk”, but I it would be nice to hear if others experience the same issue.

Direct sunlight intensity/effect on cockpit surfaces is extremely strong. As you can see in the screenshot from MFSF, the switches and switch labels are not even visible. There seems to be too much difference between shadowed surfaces and non-shadowed surfaces. I also checked YouTube videos from others that show the same issue.

I have attempted disabling bloom, but there is no change. MSFS does not have any controls/sliders for HDR. I also tried adjustments to “gamma” in the Nvidia control panel, but this makes the non-shadowed surfaces too dark if lowered.

This sunlight intensity/effect issue is also applicable to external aircraft views and scenery. I would like to suggest some type of ON/OFF option or slider adjustment for the user. 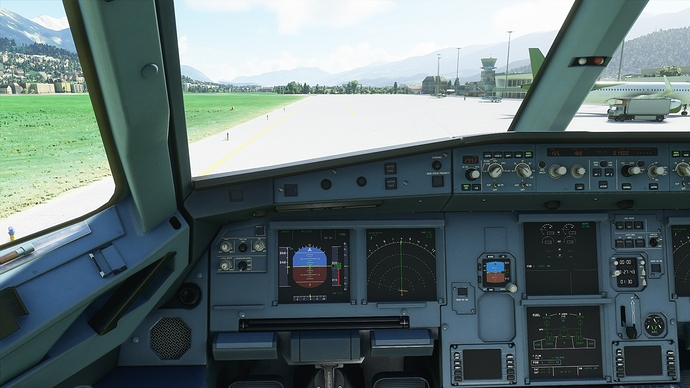 Here is another screenshot at LOWI at 10:30 am, August 24, with “few clouds” weather. Tarmac and grass is just way too bright or over-exposed some how. Click on the picture to enlarge for better quality.

Yup and also the panel darkens too much when looking toward the sun, as if it’s trying to simulate the closing of your pupils. Not helpful. I agree we should be able to adjust or turn off these cockpit lighting effects.

same issue, the sun glare on the horizon is too intense, i would prefer to fly in clear skies but find i have to create dark cloud layers to dampen the glare effect. quite annoying

I hate to say it, because I think this lighting looks beautiful, but you have a point. And I bet Asobo hasn’t even considered this, because the lighting is done the same way as any other modern first-person game.

What’s going on with the high-contrast lighting is that it’s emulating the way a camera sees the world. Making the graphics look like they were recorded on a camera is a common way to increase the feeling of realism, since we’re all so familiar with recorded images. Hence why so many games were obsessed with lens flares for a while, despite no human eye seeing them. And when you’re making a game where you’re trying to create the feeling of being in an action movie or fantasy movie or whatever, then this camera-based reality is perfectly fine.

But this may be one example where it’s more important for the player to see more like humans actually see, with eyes that can handle a much wider dynamic range than a camera.

I ended up decreasing the gamma value, using the Nvidia control panel, from 1.0 to 0.9. Anything lower makes the shadowed parts too dark. Still far from good, but I can now at least find and read the labels on buttons and switches. Hopefully MS will do something about this.

Compared to various tutorials and YouTubes, my cockpit interiors are someone dark and difficult to read. I’m not referring to backlit dials but the amount of sunlight inside. Is there an adjustment for that? Thanks

The cockpit have internal light switches. Some that increase the brightness

Find those and play around to your liking

If it also too dark when you do startup you can turn on the head torch. I think it’s left alt L.

Thanks gents, I’ll give those a whirl.

Also, the lighting adapts to how bright the outside is. If 50% of your view is the windows and it’s sunny out, the instruments are very dark (trying to simulate how your eyes would work in that situation). If you move the view down to have less of the bright window area on your screen, the instrument panel will get brighter.

Unfortunately that’s not how the human eye works, but a camera.
The effect is nice, but too strong.
IRL you definitely don’t need any instrument and/or panel lighting in bright daylight.

Actually, it’s not simulating how the eyes would work. The eyes can handle the light and dark difference. It’s rather simulating a camera, and that’s what’s wrong with 95% of devs. and designers. They’re always to fixated at simulating what a camera sees instead of what the human eye sees. That’s why they’re always representing red lights as either pink with a red glow or amber with a red glow, and green lights as teal with a darker teal or (very rarely) green glow. The human eye however, sees these colors in their immaculate state. When we look at runway threshold lights, they’re immaculate green like the green in the traffic lights, and the red lights of runway end or papi are immaculate red like the tail lights of a car. If you look at same through a camera, they’re usually washed out because the camera is not as good as the eye.

If you want to experiment, look at your tail lights (turned on, of course) with your naked eyes, then look at them again through the camera on your phone. Do the same with a green and/or red traffic light. You’ll see the difference. What you see through the camera is almost exactly what pretty much every designer models! I wish they can wake up to the fact that colors, especially colors of light, are richer in real life than in photos or videos. That’s the same problem in X-Plane, lights are teal instead of green, or amber instead of red.

I have made a zendesk report on this and ask that others who find it a bit of a problem do the same. When you start with engines running and want to take-off straight away during the day you should not first have to fumble around in darkness turning off yokes and looking for illumination switches. By default, the panel and instruments etc should be clearly visable. Am loving this Sim! Cheers.

I wish this were replaced or supplemented with a red light, or even some sort of night vision. The flashlight is too stark and bright.

As a bit of a work-around, I have mapped all lighting commands to F1 … F8 to turn on all interior and exterior lights. I like to easily see in the cockpit and be seen by others on the outside! A quick run of the finger along those buttons before take-off and away we go all set up. Cheers.