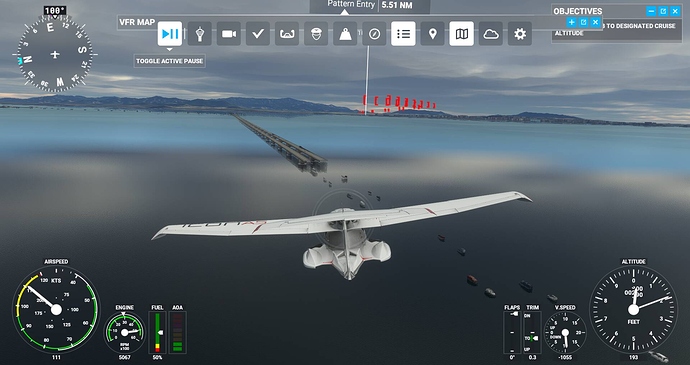 The Jiaozhou Bay Bridge (aka Qingdao Haiwan Bridge) is partially omitted from the scenery database. I found this while flying around Qingdao (China) and checking out what was the longest bridge over water when it was completed in 2011. As can be seen in the screenshot, the traffic continues to flow miraculously over the water all the way from Huangdao (Dayinquan). Although I’ve visited Qingdao, I’ve not traveled on this bridge myself, however, it seems intact per Google Maps and Google Earth. I’m not sure if there are other examples of traffic flowing over water in FS related to to missing bridge sections.

If you visit Lake Pontchartrain, New Orleans, USA, that also has a long bridge crossing it North to South. The northern end is intact then disappears as you head south. The vehicle traffic continues to drive over the water though.

Possibly a bug with long bridges?

Here are some screenshots of Lake Pontchartrain Causeway disappearing halfway across the lake.

The bridge is also not quite intact at its southern end: 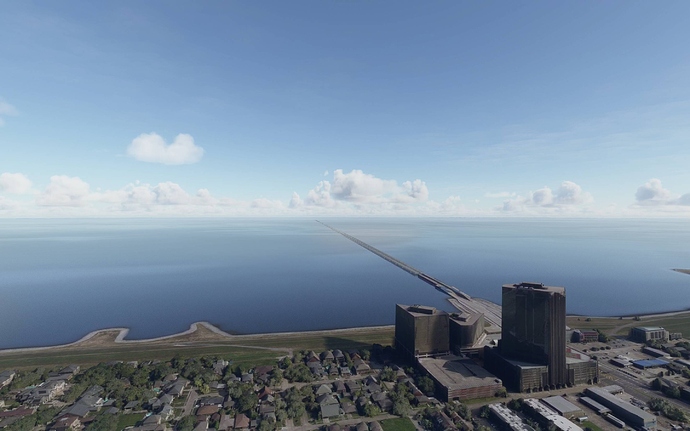 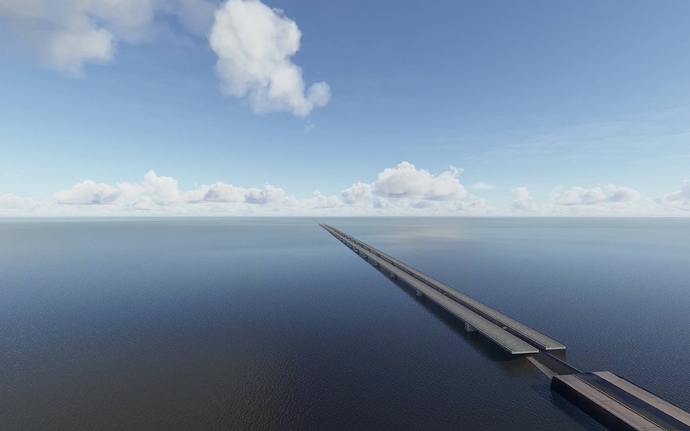 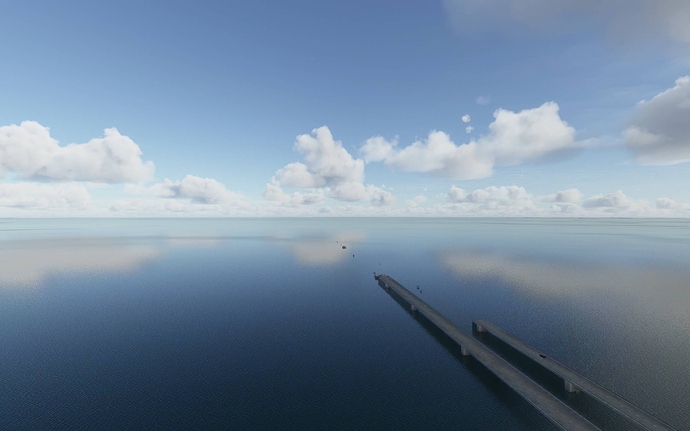 You can spot pieces of the road that appear to have broken off the rest of the bridge. It almost looks as if there is realistic damage to the building itself: 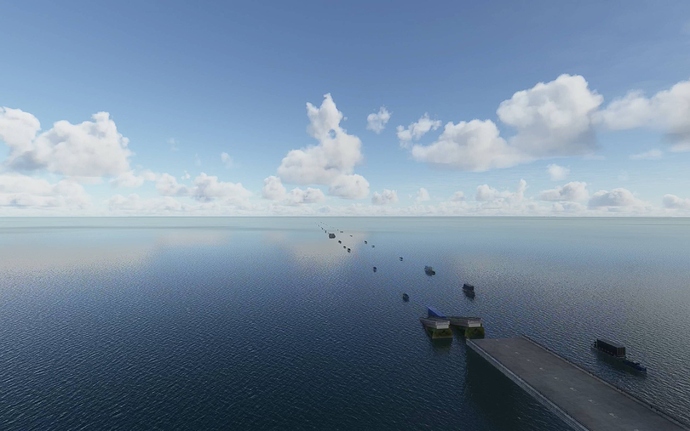 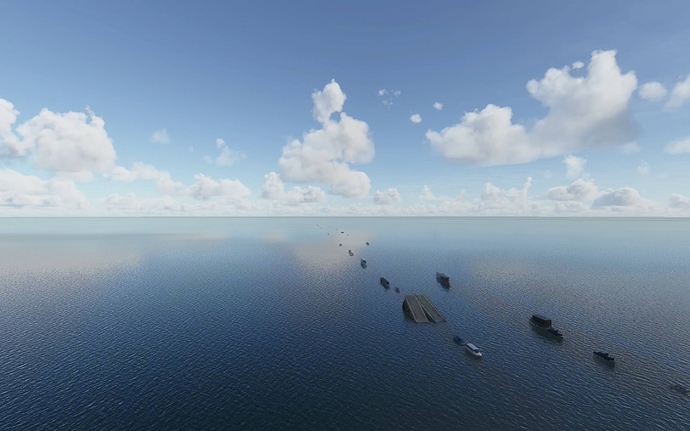 Even the causeway to Venice had this. ZD’d it, no idea if they fixed it already…

Those are good screen shots - it looks even worse than the bridge I was following in China which had a clear termination. The Causeway in your shots looks like it was bombed in places-yet there are no bomber aircraft are available for FS 2020-so far.

Thanks for the additional example. The Hong Kong–Zhuhai–Macau Bridge is also mainly invisible. It is rendered from the HK island airport to the first undersea tunnel entrance, but never reappears again on the Macau side. Once again, some “courageous” commuters travel along the water to and from Macau, over the missing part of the bridge, so it seems there is some recognition in FS that the bridge should be there. Interestingly, most of this bridge is missing from Google Maps, yet is does appear on Google Earth. It was opened in 2018. Funny that one Google app doesn’t agree with another Google app concerning the existence of the bridge. The bridge does appear in full on MS Bing Maps. I will remind ZD about this issue as you have already done. 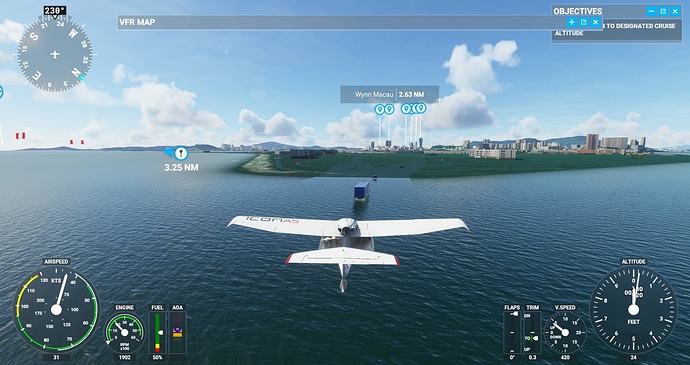 Yea looks like the AI had no idea what to do with that!

Yes-I’m not expecting perfection straight off especially in terms of scenery. The long bridges look much the same in FS so it seems they use some sort of standard design to replicate them, rather than a photo realistic process. I noticed that I can land on water with the Icon A5. I went on a kind of boat cruise along the Bow River near Calgary in the A5 and got caught under a bridge section even though I had several meters clearance above. Another thing I saw is cars flying underneath the bridge deck then flying through empty air until they reach the roadway. It’s kind of a supernatural experience. 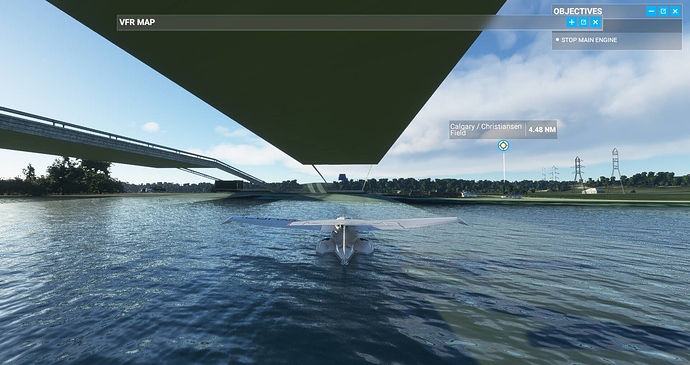 Looks to be an AI error and maybe not so much Bing maps. Ensure you’ve submitted these images and locations to Zendesk so they can be prioritized

I previously logged the missing/submerged bridge issue with Zendesk .I’ve logged another issue related the the A5 getting stuck underneath the bridge, while traveling on the water. Interestingly, I was able to fly the A5 under the bridge without any problem. On my way to the bridge, I noticed a transport truck going against other traffic and some vehicles racing along the shoulders of the highway. It looked like a Mad Max scene on the highway. Anyway-its a flight simulator not a highway sim.