aking them look good from 50 feet away on the ground, like in a different type of game where you spend your time running around on the ground, would simply be a waste of resources (both developer resources and PC resources).

Sure, for AP pilots getting up above the clouds in 10 minutes, flying straight for hours and land again in 10 minutes, these stories you’re telling may hold… . Good trees and good sceneries just spoil your landing framerate. Trees are irrelevant for aviation, same with fauna, buildings, water, POI’s, airport life and airport buildings. You are not alone. But you are also not the only MSFS customer. Hoards of other people like to fly around at low altitude in GA aircraft and in that case (if you would do that) you would notice the issues.

In short: you can’t decide other people’s expectations. We have 177GB MSFS on our disks… and 99.5% of that volume is dedicated to high quality textures and scenery. Saying that a wish will only cost resources is not an answer to the question, it is evading the question and disregarding wishes of others.

I hope trees will be improved with the 27/7 release. Leafs are not correctly rendeded… and especially the pixelated tree tops spoil it for me. See image below. That is at least 200 feet distance. When I’m flying in the mountains and I want to take a good screenshot, I can’t have any trees in the foreground. Actually trees get worse on shorter distances very quickly, even in Ultra mode, 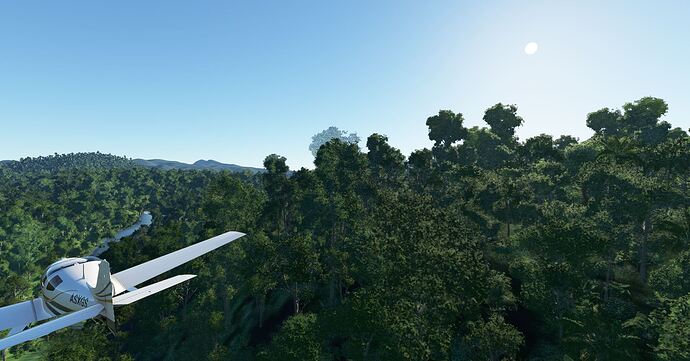 I disagree with that, trees can be improved and they should be improved. Quality and distance.

Aside of lacking texture resolution fidelity it seems the used compression of data also affects colour rendition (quite small colour palette) which leads to unnatural colours. See screenshot from ArcanePhyton.

Low altitude in GA aircraft is all I do in MSFS. Don’t assume things.

While we can always hope for continued improvements, there is a point where enhancing the visual fidelity of ground objects simply makes no sense from a developer resources standpoint (at least for Asobo - if some third-party developer wants to invest time in rendering every leaf, more power to them) and will also crush the frame rate for those of us who like to fly low and slow enough to notice.

Low altitude in GA aircraft is all I do in MSFS. Don’t assume things.

So you like to fly at the same altitude as I do ? You didn’t notice anything ? Keep in mind you can fly with lower settings, you don’t have to use Ultra all the time, and suffer from framerate loss… when trees and scenery are not important for you, go Medium, you’ll get 20 frames more.

While we can always hope for continued improvements, there is a point where enhancing the visual fidelity of ground objects simply makes no sense from a developer resources standpoint

Who are you to decide ? are you part of the Developer team ? You are a marketing person for Microsoft ? Just have a look at the wish lists and bug lists… Last year the majority of these wishes was aircraft handling, ATC, procedures, AP tools. Nowadays, this year, G1000/3000 is still on top (because it is not solved) but 80% of the new wishes have to do with ground scenery ! MSFS attracts a lot of tourists, these customers should be served too. Wish #1 is helicopters… we all know at what altitude helicopters fly normally.

Do you think there is another worldwide sim ? Have you ever been to Amsterdam, or London ? did you have a look at photogrammetry in these places… there’s a lot to improve, especially at ground level. MSFS is fantastic for weather, sunshine, clouds, cockpit… super… but imho it does not fulfill its promises in most cities, even WU cities. A choice for frame rate over scenery is not always appropriate, the Nordic update has proved that. We had topics with 200 complaint submits in 2 days.

Talking about trees, there is a third issue, that is solid trees, like these: 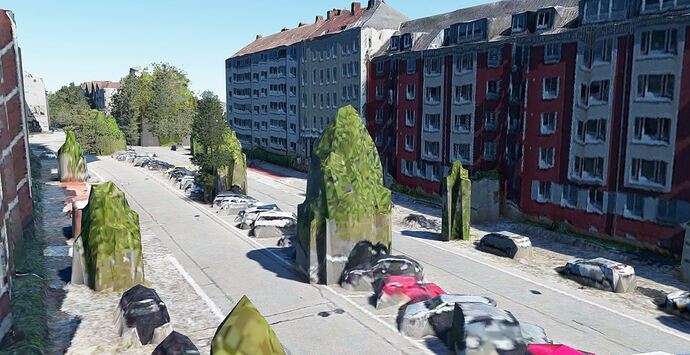 Also notice the tilted windows and the distorted building shapes. These photogrammetry errors are everywhere you look…

Agree with you completely, scenery is excellent. I’m playing Microsoft Flight Simulator, not Microsoft Walking Around On The Ground Simulator.

Helicopters don’t. And on city/street level scenery I can agree with you, however the tree issues start well beyond that distance ! In above rainforest picture, the prominent pixelated treetop spoiling my screenshot was about 200-300 feet away. With trees, the issues also show when you are on 2500 Feet and look around. You will see some type of circular boundary, beyond that boundary there are no trees, because of the tree distance issue. They keep the short distance in, for performance reasons. With the 27-Juli update it will be solved, it was promised.

Photogrammetry is a different story. In this case making compromises is not avoidable. I’s just fly(high)over scenery. Things like tree trunk blocks could be probably cured with Ai geometry flattening.

It’s weird that they let you taxi and park in Flight Simulator as the name suggests you only do flying. Because then the quality of the graphics while taxiing and parking might actually matter. And it’s totally bizarre that people might actually like to take a look around and appreciate the places they’ve flown to. Well, good thing they didn’t market this as a bush flying game where you could land off field and on airstrips close to trees.

You want realistic vegetation? You can not do better than this: https://secure.simmarket.com/-habashi-4-season-pack_free-lod-for-msfs.phtml#reviews For those dissing those of us who fly low and see the World, MSFS 2020 is a Total World , not just for flying at 30,000 feet flipping switches for 7 hours and spending a few minutes a day landing and taking off. MS clearly has much more in mind to use this as a base for any kind of “game” they want. Want a FPS? Just add guys and guns. Want a role player? Add a few guys/gals and a scenario or 2 that look like (in the program) a Bush Flight. Lots more, too. If this were “just” a way to learn how to fly some random plane you choose, why are there no “study level” planes? Don’t get me wrong, I love flying, but rarely higher than 1k Ft. and flying the Mach Loop in Wales at 320 ft. is a blast.

I think vegetations in MSFS are smartly designed to look 3D but only consume as much as 2D trees. Otherwise there’s no way they could effectively render thousands of trees without heavily impacting the performance

Well let’s hope that is the case. Actually I think it won’t be that easy to solve the leaf shape. @MegaRiceBall734 may be right, that trees are actually 2D texture-like objects. I did several SDK experiments lately with a cactus shape (3D mesh) I found online. A solid mesh, low-poly, no separate needles, but still a mesh. If I put 500 of these in a field, my frame rate went down 30-50%. Trees at mid-distance cannot be 3D-meshes, they have to trick them, probably that happens in a GPU shader. If you get nearer, you see pixels. That pixelation can be solved, as well as pixelation for tree shadows in water.

The LODs can be a mix of 2D and 3D. 2D when further away, and then it only loads the mesh in once you’re super close. Not saying making great looking trees is trivial, but the fix for this is straightforward.

Y’all complain about any darn thing

The LODs can be a mix of 2D and 3D. 2D when further away, and then it only loads the mesh in once you’re super close. Not saying making great looking trees is trivial, but the fix for this is straightforward

In principle yes ! Challenge is: how would that transition be blended… you change the object while you approach it ? how to avoid jumps on short distance… remember the Nordic mountain tops, popping out. You don’t want to see flickering changes… When you want to avoid flickering issues, you could change only the trees at the forest boundaries… and perform the transition from 2d to 3d on quite large distance…

You could just fade in the transitions. Probably lots of ways to do it.

When my idea about the current trees is right, they are generated in the GPU… then the GPU should be able to take that as a “skeleton” and wrap some real 3d geometry around it, on approach. But I don’t know if that change can be done gradually.