Having just had to reinstall the sim for the 4th time after various hardware upgrades etc. I am reminded of the elephant in the room to this amazing simulator; Will we ever see an improvement to the game launcher?

In its current form it is very flawed. From slow initialization, high resource usage (30% GPU utilization is absurd, especially on a 3080Ti which consumes plenty of power at that level of usage), to glitches with the download stability when needing to continue using the PC while downloading, it feels like it was an ill-conceived addition to the sim.

Expecting a 130+ GB download to hijack most of a PC’s resources for the entire download is such a pretentious thing. Even with a decent internet connection, the overall performance from the Asobo/MS servers is average at best and, more often than not, abysmal. Expecting us to walk away from our PC for a few days to complete the download, without interrupting the application’s exclusivity requirements is unreasonable.

So, again, what are the chances that Asobo will redesign the front-end of the sim and allow us a simplified download launcher that runs prior to the game?

high resource usage (30% GPU utilization is absurd, especially on a 3080Ti which consumes plenty of power at that level of usage

That issue is easily suppressed by setting an FPS limit in nVidia Control Panel. Doesn’t have to be a value that you’ll ever be able to reach while flying, although capping that could help with stutter reduction in case you see those.

Thanks for the tip! I appreciate it.

Not so easy, unfortunately… I have the Microsoft Store version that doesn’t allow me to edit directories for game installs like Steam/etc. does, so I am unable to change that setting unless I make it a default system-wide setting, which I am not comfortable with when I am running a 120Hz G-Sync monitor.

I realize I can take ownership of said directories, but it still won’t allow me to select the executable to add to the nVidia control panel 3D settings tab; One of the downsides to buying from Microsoft directly.

I realize I can take ownership of said directories, but it still won’t allow me to select the executable to add to the nVidia control panel 3D settings tab; One of the downsides to buying from Microsoft directly.

I purchased the sim directly from MS and have never had this problem. Even after installing the sim on a brand new PC three weeks ago, I never had to take ownership of the folders for the program to appear in the Nvidia Control Panel. It’s just right there, along with everything else: 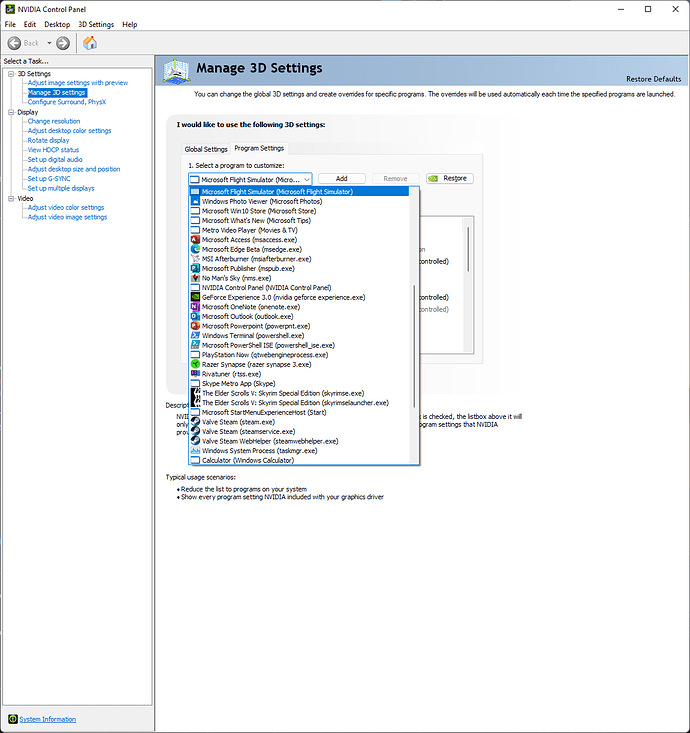 Nice! I had forgotten there are pre-set profiles in there. I’m so used to manually adding the executables.

Hats off to you for the extra effort in correcting me and thanks very much for the solution.

I am also dumbfounded by the launcher!
As an original Beta tester in 2020 I just assumed this was going to get fixed up by now and completing much quicker.
Having said that it’s only once because loading a flight is quick.
If you look at X Plane it can take 10 minutes or more to load flights each time. Horrendous sim.

but I got used to it and watch YouTube or Disney+ videos after clicking the Flight Sim launcher to spend some time elsewhere until the main menu finally arrives instead of staring on the loading screen.

But loading a flight is fast - with online features switched off it sometimes takes only a minute, with smaller airplanes even faster.