Wondering why is still missing this AirPort. I am playing in Series X, and i can not download Air Hispania Mod about LEZG.

Can someone explain me about this or if u know something about. I will very thankful about an answer about this.

The Mystery Behind LEZG
Missing Airports Sent to Zendesk
SlippedSheep437 February 1, 2022, 7:49am #2

I reported to Zendesk as early than June 19, 2020 that this relevant airport was missing.
It is marked as Solved!

Also has been reported and discussed here:

Of the two runways the 30L-120R is the longest runwany in Europe and emergency landing for the Space Shuttle still not i n the sim. 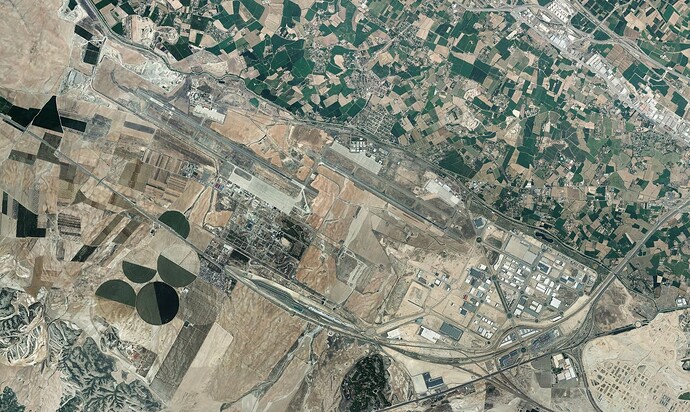 Hi everyone!
Many airports in Spain that serve both as a military airfield and a civil airport are missing in the sim.
I can recall, at least, LEZG (Zaragoza), LEVD (Valladolid), LEAB (Albacete) or LELC (Murcia San Javier). This one is now a military exclusive airfield as a new civil airport (LEMI) was built in recent years.
As you said in your post Zaragoza is a very important hub cargo in southern Europe and Valladolid is a destination for some Ryanair flights.
Maybe there is a request by Spanish autorities about national security concerns…
Greetings from Spain.

These airports were in FS2004 the problem is that they are blurred in Bing maps. It seems that these airports must be generated “by hand”…

No secrets in LEZG: Ejército del Aire - Organización - Emplazamiento
When landing, to reach the civil terminal commercial aircraft go very close to the F18’s parked in the fighter military area.

Sure! As you said there is no room for secrets in this kind of airfields where so many people fly each year…

Maybe it’s related to availability of aerial photographs of the terrain in Bing Maps. In Iberpix (the official site of GIS data in Spain) you can clearly see the civil area of LEZG but the military area remains blurred.
By the way, I guess from your badge you’re from Zaragoza… aren’t you?
Saludos from Alicante, then…

The aerial picture that I have posted is public Is a screen capture I made but don’t remember the web.

Best regards too from Zaragoza!

This is Zendesk speak:
Below you will find a short description of each status.

I would be surprised if it wasn’t added in March with the next world update.

The situation is the same as other countries (Germany, Netherlands and so forth) that had their missing airports added when their world updates hit.

I would be surprised if it wasn’t added in March with the next world update.

Then be surprised. It hasn’t been added. Just as the southern part of the Malaga airport is still missing.

I’m really dissappointed with that World Update. Adding POI’s is always great, but the first job on the list should be to get all Airports in the covered area right.

If an airport is hidden in Bing maps, is not automatically generated. If is in Bing it is done with little work and they dont’t use another source (map or addon) that will require a dedicated time.

Also they could have considered this:

Xplane has an excellent system where they allow the community to develop different airports and submit them in a centralized system. Once approved for quality, they’re pushed as default airports in the next update iteration. We can take this a step further and also include landmarks/POI’s which can be developed by the community and approved by Asobo or MS, which then can get included in the next update iteration. I was wondering if MSFS has any such system in place or has plans for any such sy…

The Airhispania LEZG has been present since FS2004 and the MSFS version is perfect.