Looking for a HOTAS

I have an old Thrustmaster Fox 2 that needs an enormous dead zone in order to keep the plane level, but makes small adjustments on approach really hard. Also, the rudder is too twitchy and straight up unusable.

Without breaking the bank, is there anything else worth looking for? I’ve enjoyed other Logitech products (G915, G603, G Pro Headset), I figure the X58’s got to be good too…?

Depends on what you want to fly. I have the X-56 and they work well with both MSFS and other flying games.

But since I fly almost exclusively the A320. I just use my Thrustmaster TCA Officer Pack Airbus edition.

I pretty much only fly the 152, sometimes the Baron.

Read all the reviews you can find. I have an original Saitek X52 that has held up for 15+ years, but I’ve heard that the new ones from L’tech don’t last as long.

X56 has served me well so far. Has a ton of buttons and axe that can handle most of your needs. Controls feel good and precise.

The feature I love best is the thumb stick on the main stick that’s mapped by default to camera free look.

Save up some money and get one of these https://www.amazon.com/Thrustmaster-HOTAS-Warthog-Flight-Stick/dp/B00CBVHJ00/ref=sr_1_4?crid=22Q2JQCZ1QUT5&dchild=1&keywords=thrustmaster+hotas+warthog&qid=1607942913&sprefix=thrustmaster+hotas%2Caps%2C179&sr=8-4 YOU WILL BE GLAD YOU DID! 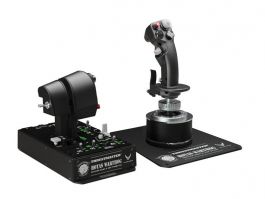 If I had a throttle, I’d totally agree with this. But to get the throttle too, brings the total up to $880, which I just cannot justify.

I’d get a Saitek yoke and throttle for now, Ideal for the C152 mate, maybe branch into DCS later when prices of things quieten down ?

I own the X56 as well and it is almost perfect for every kind of sim. Quality could be better but it is okay and quite robust. At first I wanted to buy the TM Warthog but since I do not have any rudder pedals I chose the X56. You can use the stick for rudders which is a big advantage compared to the TM Warthog.

The Warthog is definitely worthwhile if you’re willing to spend that kind of money. You definitely wouldn’t regret it. But it’s a huge price gap of about 3x between the X56 and the Warthog.

And as @Joerg1473 said, if you don’t already have rudder pedals, that’s an extra expense with the Warthog as it doesn’t have a twist axis on the stick.

So in the end it depends on your budget. If you can hack the Warthog + pedals of your choice, then you’ll have the best HOTAS you can get outside of the more expensive, boutique HOTAS available like Virpil and such. Otherwise, the X56 is pretty much the best you can get for a reasonable price.

Nothing would beat this set in this price range. Once you start using it, you won’t go back to any plastic counterpart, believe me.

The actual deal breaker is the pedals, as you would still need them, but will only be using them for taxiing…