The idea for this tour came from the recent official MSFS 'Kiwi Magic’ Twitch stream where some of the participants expressed interest in a Lord of the Rings film location tour in the sim.

Whilst the movie trilogies were filmed over a wide variety of locations spanning the length and breadth of New Zealand, there are a cluster of well known sites around the Fiordland and Queenstown Lakes area that can be strung together into a route around some spectacular mountainscapes.

It is suggested to set your sim date/time to either autumn or winter (May – August in NZ) and select setup your departure around 10.30am local time with a high layer of scattered cloud (20,000 feet base) for atmospheric mottled lighting along the flight. Cruising at an altitude of 4500 feet AMSL will keep your clear from terrain but also have you flying below the mountain tops for best immersion into the fantastical landscapes.

To begin with, depart from runway 26 at NZMO (Manapouri) and climb out towards Lake Manapouri. A series of right-hand turns will line you up with the mouth of the Waiau River, which featured in Fellowship of the Ring as the Anduin River where Frodo and his companions paddle in boats on the way to Mordor. 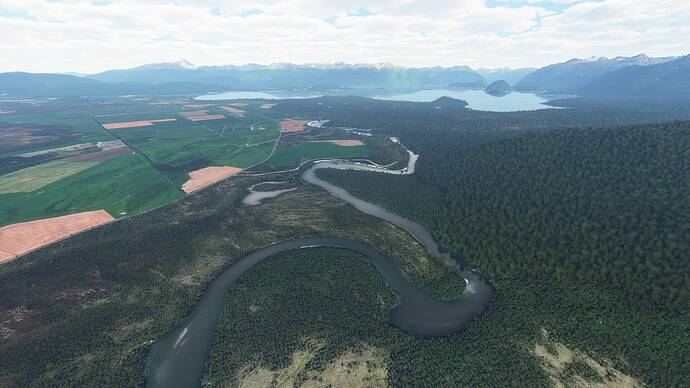 Follow the GPS waypoints along the meandering course of the river until Waypoint 7, where you will break off and head south east towards the large ‘Kepler Mire’ swamplands that feature in The Two Towers as the Dead Marshes (and also the setting of the Battle of Dagorlad in the opening sequence of Fellowship of the Ring) where Gollum guides Frodo and Sam through the swamp, saving Frodo as he falls under spell of the dead that seem to float within it. 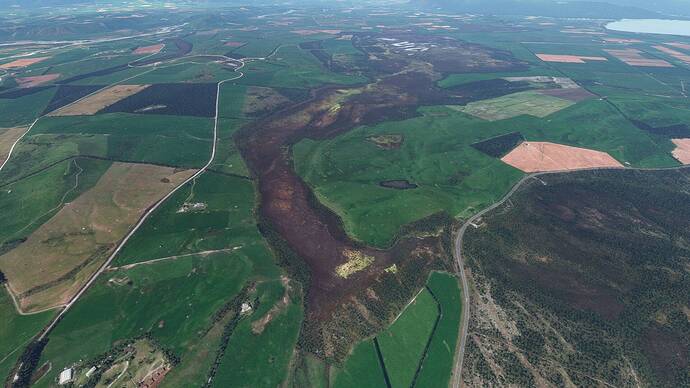 Leave the Dead Marshes to the north east, track overhead MO NDB (346.0 kHz) and continue in the same direction until picking up the state highway 95 bridge over the Whitestone River. Follow its course north, east, and north again until reaching waypoint FANG.

This GPS position is overhead Snowdon Forest, which doubles in Fangorn Forest, as seen The Fellowship of the Ring when Frodo and his travelling party pass through before entering the Misty Mountains. 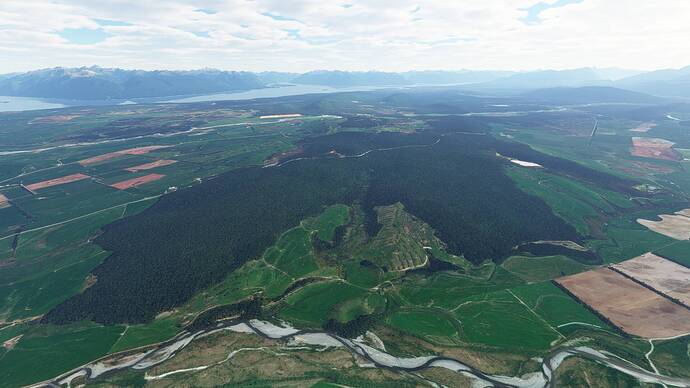 As you reach Waypoint 14, the GPS course will set your heading for a low pass in the hills ahead, leading you out of the Te Anau basin and towards the dramatic span of the Von Valley. Our next filming location isn’t too far away, at position ‘LODE’.

In the real world, this where the Mararoa River flows out of the South Mavora Lake. In Fellowship of the Ring, this was the location where Lady Galadriel gives Frodo a phial of starlight before he and his companions leave Lothlórien by boat along the Silverlode River. 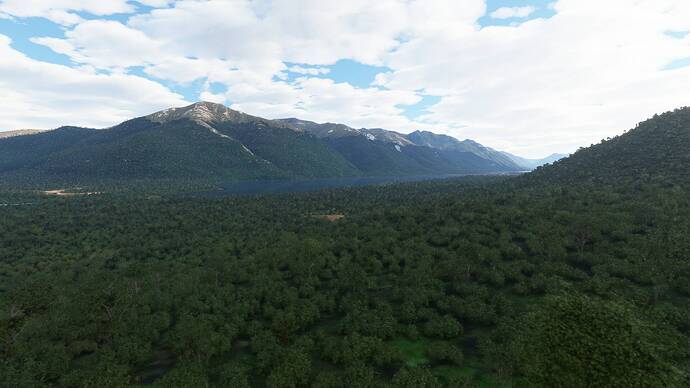 Flying up the centre of the valley northbound now, we overhead the beautiful North Mavora Lake which was featured again in Fellowship of the Ring as ‘Nen Hithoel’. In the first film, this was where the Fellowship moor at the side of the lake at the end of their journey down the Anduin River, and the hobbits hide from the Uruk-hai. 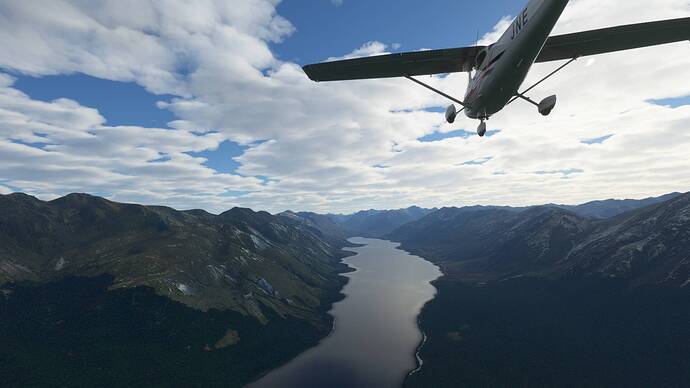 Upon reaching the end of the twin lakes, we turn slightly right to follow the flow of the Mararoa River again. The waterway cuts a dramatic gorge through the rugged mountains of the Fiordland National Park, and whilst this wasn’t one of the filming locations from LOTR, it features some of the most scenic terrain of the tour.

Eventually waypoint 19 will line our flight path up with Elfin Bay on the shore of Lake Wakatipu, where we turn left to follow its western shoreline towards the lakes head at the braided Dart River.

As we cross the lakes shoreline here, the vista ahead of us will be recognised by many as the foreboding looking backdrop to the fortress of Isengard. Whilst the city itself was digitally rendered into the Peter Jacksons footage that was shot on location, the unmistakable backdrop of Mount Earnslaw has an other worldly presence. It also features as the snow covered mountain range in the opening aerial sequence of The Two Towers. 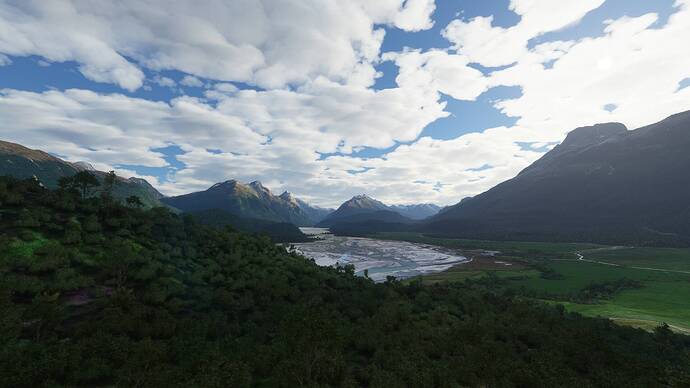 Waypoint 23 sees us make a U turn around the green hill between the river braids (Mount Alfred) to track back towards Lake Wakatipu. The small township of Glenorchy has a grass airfield to make a landing at (NZGY) and in the real world, horseback treks leave from here to take in the scenery from ground level. The local stables actually provided the horses and riders that were used in the movie battle scenes!

The GPS guidance will instruct you to follow the lakes eastern shoreline now, around the side of Mount Crichton. Continue to waypoint 25, where you will make a left turn towards GPS mark ‘CAMP’ to follow the bend in the lake. In the real world, this lakeside area is known as Twelve Mile Delta but in The Two Towers, it was the Ithilien Camp where Frodo, Sam and Gollum watch the battle between Faramir’s Rangers of Gondor and the men of Harad riding Oliphaunts. The scene is famously remembered where Sam and Gollum discuss coney cookery (“Boil ’em, mash ’em, stick ’em in a stew!”), with Mount Crichton visible in the background of several shots. 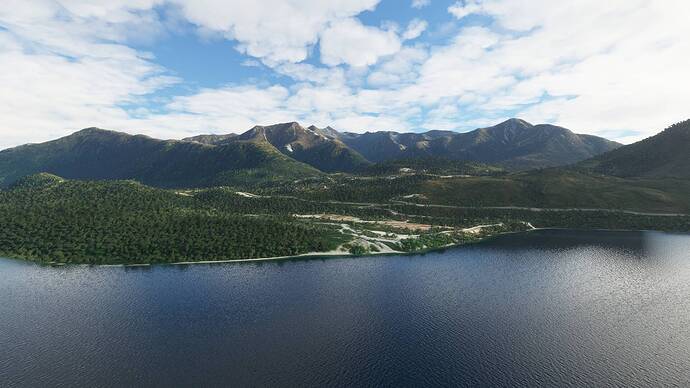 Following the water course of the lake, we continue eastbound until arriving at Queenstown- a major adventure tourism town popular with international visitors. Waypoint ‘DEER’ marks Deer Park Heights, the grassy rise that overlooks the much higher and steeper backdrop of the Remarkable Mountain Range.

Deer Park was used for several different scenes throughout the trilogy including when Gandalf rode towards Gondor, the refugees escaped from Rohan, where the attack of the Wargs occurred, and when Eowyn provided Aragorn with his ‘tasty’ stew. The unmistakable sheer vertical rock faces of the Remarkables are visible in the background of many of the shots- with a popular ski resort located there in the real world, accessible from lake level via a windy road around the back of the ranges, visible out to the right hand side of our flight path. 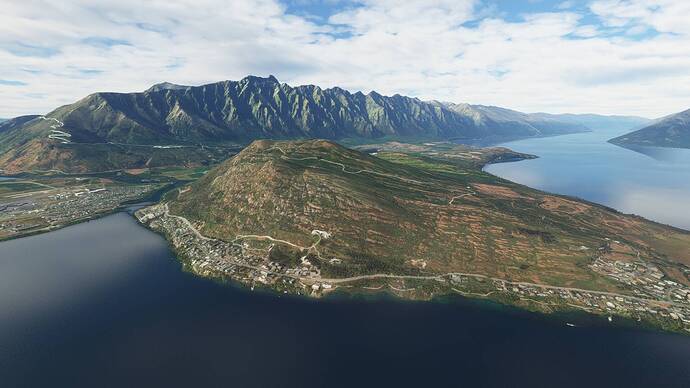 You’d never realise from the LOTR footage that the park was adjacent to a busy international airport- but it is, and next we’ll cross overhead Queenstown Airport (NZQN), to track northeast again. This will bring us overhead the much smaller Lake Hayes, and then a further turn to the right will line up with the Kawarau River, our final LOTR filming location.

We’ll cross over the Kawarau Bridge to begin with (the home of Bungy Jumping), before making a left hand turn to loop back around the Gibbston Valley wineries to then pick up the Kawarau River once more and follow it south west to make a full stop landing on runway 23 at NZQN. 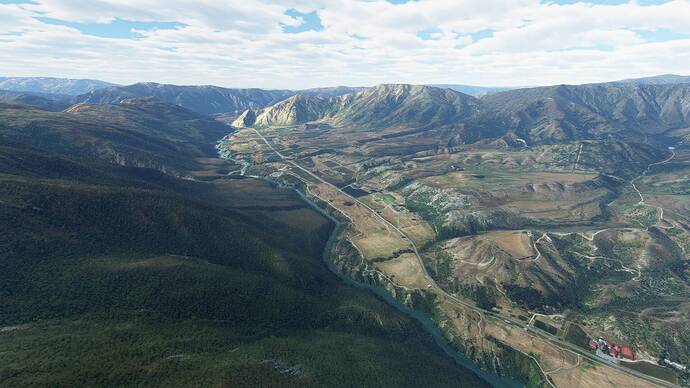 Waypoint ARGO marks the site that The Argonath on the Anduin River statues were superimposed to the sides of the steep river gorge- the same fictional river in the film that Frodo and friends paddle along in Fellowship of the Ring as was depicted by the Waiau River just outside of Manapouri.

Brilliant. Someone now needs to create a moving Gollum to be inserted at random sites.

Great trip. Reminded me to re-watch the trilogy again.