I have a good setup but am getting frame rates much lower than I see others have.

I read some things about enabling the gpu hardware acceleration in windows and have enabled that which help gpu performance but frame rate still a bit low.

At best I get 20fps but as you can see in screen shots the gpu and cpu are not pushed at all.

Setting are generally ‘high’, nothing on ultra 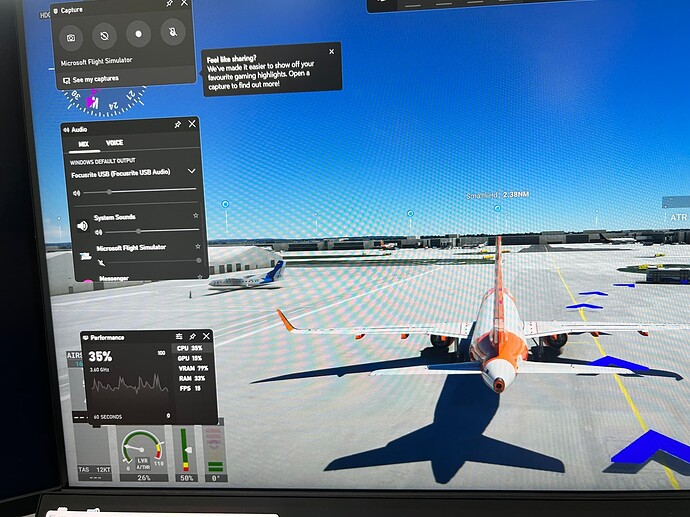 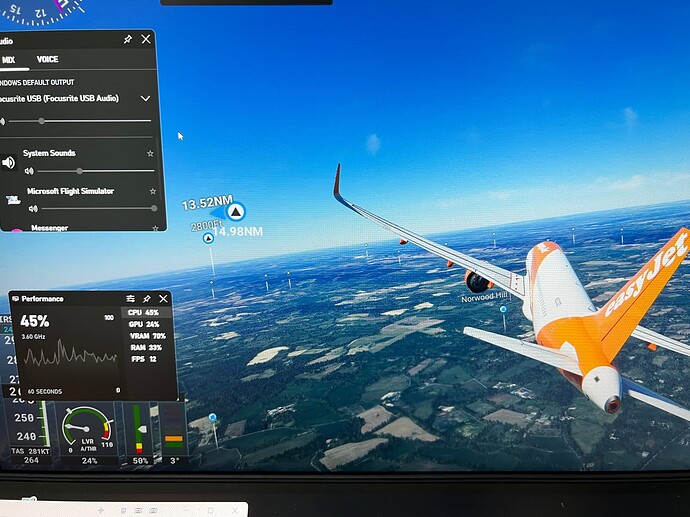 Any ideas? I use Xbox game at fps counter, so assume that is acxurate?

I’m not sure how accurate the Xbox counter is tbh

Hmm. GPU acceleration is something that’s enabled by default in Windows, as soon as the graphics driver is installed.

Try enabling developer mode in the sim and enable Show FPS graph from the options menu.

Make more screenshots if you need help deciphering the graphs.

I have found for MSFS I can run a limited gpu overclock or HAGs but not both. I can’t speak for factory clocked hardware but if you do run into problems remember that the OC is still an overclock.

HAGS on or off only makes like a 1 FPS difference on my system. I’m stable with it on or off, but it’s basically pointless in most games as far as I can tell.

I didn’t use the fs developer mode, but I used nvidia and I turned a couple of settings down and I got 30fps up in the sky and around 20 near the ground.

However; the gpu and cpu were still only ever working at about 50%. It’s like it’s not trying to get the best out of the hardware. Frame rate isn’t locked to 30fps or anything.

Don’t think my gpu is overclocked. So that shouldn’t be an issue.

Word is that MSFS has single thread issues. Your CPU may be only at 50% but that is all on one or two cores ! So once that core is full/100%…bam FPS drop. I know, its stupid.

Yeah I had been reading more about that. I do still see people with similar cards and settings getting much better fps though. It’s very frustrating. I9-9900 3.4ghz and a 2070 gpu should be getting more than 20-30 fps I think on medium/high settings