METAR Clouds too low in SU7?

Here i am flying at 1700ft with the correct altimeter setting but the clouds are way lower than me, while the METAR says BKN017: 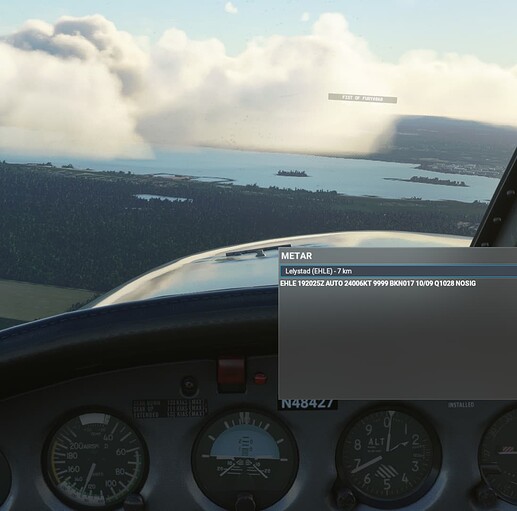 Was wondering why everything has been shrouded in low level pockets of fog.

Thank you but this airport for instance is exactly at MSL, so it’s unrelated, the clouds are still too low either way.

Seeing similar issues. And they have allowed cloud bases below MSL by 400m/1640ft. So suspect all cloud bases are rendered from -1640ft AMSL or something like that.

Of course cloud should be at heights above ground level from a METAR.

It isn’t like Asobo don’t work with a meteorological outfit where a simple question could have been asked. Applied meteorology isn’t that difficult.

Yup tried a landing at Southampton yesterday and the airport was covered in a thick layer of cloud at ground level.

yep… Let us hope they patch it fast and don’t make us wait till February.

definitely, just flew east australia with clouds in the ground.
its asap noticable…another not tested feature?

Yes fog is great i noticed, but this topic is about low/ground clouds, not fog.

It’s literally cumulus clouds moving over ground along with the wind. So sunny skies when standing on the platform, and one minute later you’re in the middle of a cloud, and another minute later the cloud moved on and it’s sunny again.

Clouds movement directon are equal in both case: real and virtual. Yes, for me clouds are so ‘hard’ in simulator, that’s true. In this and other test. So compact, hard, ‘rocks’. Too much densed.

So compact, hard, ‘rocks’. Too much densed.

Yes that’s fog vs. clouds what you are describing.

But i don’t think there is a discussion here. The screenshot you posted (lower left picture) obviously can’t look like that in the real world.

Ye this is the same problem they had back in SU3 or 4, Seems like they keep going back to older Builds.

They must have multiple builds going at the same time. Because some SU are brilliant and then suddenly you back to the same old problems and SU7 is a problem one. You’ll see SU8 will be brilliant.

And you’re right, why did the Beta testers not pick this or any of the million other problems up.

And you’re right, why did the Beta testers not pick this or any of the million other problems up.

Probably because they have to rush bringing features out. I hoped QA would be better after the deadline of the Xbox update, but then came Reno and this GOTY update. I understand they want to keep the hype up for the main stream folks but skipping testing and fixing things before publishing is bad. It seems we’re still in a test version now with things going haywire every 2 months.

I think it’s a better idea if they publish a couple of fixing patches in between, after every major update so people don’t have to wait months for a functional sim.

I’m finding this all throughout N. America. It seems the majority of heavy cloud is Cumulus, and often too low.

I live (and fly a 172) in a rainforest on the west coast of Canada, therefore I suppose I know a little about clouds haha. Unfortunately the current clouds are far from realistic and need to be dialed way back imo.

I didn’t fly much in earlier versions of the game so I can’t compare to earlier builds.

edit I just saw there’s a thread on this in the SU7 testing page. It looks as though it is being addressed.

This is currently being addressed through the post SU7 beta.

If you are a participant of the beta, please contribute to that beta forum.