How I love those DRM protected products… 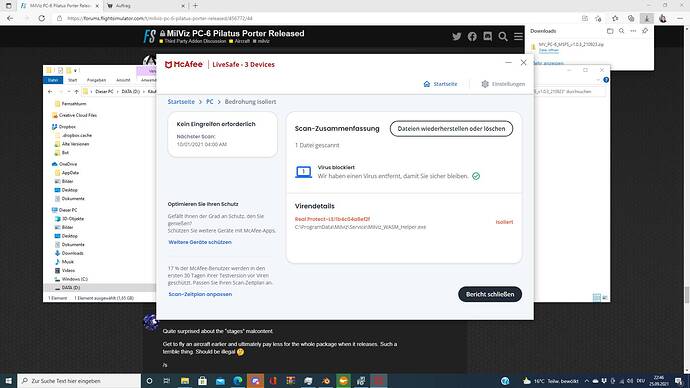 McAfee? What a joke. I’d be far more concerned about having that trash on my PC than any MSFS add-on DRM.

So I guess I have to buy - as an addition to the latest release of MilViz - a different anti virus tool?

Getting rid of that McAffe will improve your PC performance and also eliminate a source of CTD’s.

DRM stuff can be frustrating, but I completely understand developers needing to use stuff like that to protect their IP / time / investment.

I second the Windows Defender suggestion. As long as you’re not trolling particularly skanky waters you should be ok.

As long as you’re not trolling particularly skanky waters you should be ok.

The funny part is that what some would call skanky are some of the safest sites on the web - as long as you have a good ad blocker. They make sure that their files are clean, because if word got out that there was malware to be found there, they’d lose millions of dollars in subscription money. On the other hand, back when I was still running FS9, my 'puter got hit with a ransomware virus that succeeded in encrypting a few text files in my sim folder, but nothing else. I was even running Avast at the time. I booted into safe mode, scanned and deleted the bug files, then did a system restore to a week back. The corrupted files in my FS were easily replaced from the CD’s. But here’s the kicker. The virus came from a page that I accessed while doing research on dog bite statistics!

The virus came from a page that I accessed while doing research on dog bite statistics!

Yikes! I’m glad you were able to get your stuff recovered.

The best Anti Virus is ESET NOD32. Simple, very low memory footprint and does not ever cause issues.

So they locked the original thread coz people were only talking about drm and yet you’re doing another one ?
I don’t get it.

The original thread got locked because people were complaining directly to the vendor on the MSFS Board instead of taking it to Milviz’s support channel. User to user comments are acceptable. Using this board for formal support from the vendor is not. As long as that line doesn’t get crossed, and users continue to conform to the Code of Conduct when posting, this thread will likely remain open.

The choice of McAfee nonwithstanding

, that is exactly what I said in the other thread. It bears all the hallmarks of malware, eventhough it is not its intended use. It functionally could work the very same way if compromised. Bot networks are basically the same.
The safety of your system now not only depends on how well you protect yourself, but how good the third party security at the receiving server is. Your PC alone is not such an inviting target for a hacker. Some control node like for an DRM for example is. Especially when the recipient (a service on your PC) is always online. Also you have virtuallly no control over what leaves your pc as everything that is communicated will be encrypted. Could be just serial numbers, could be sniffed passwords. And that does not even imply malicious intent by the providing third party. They could unkowingly be compromised and highjacked as well.
That’s why implementations like these are somewhat questionable and in all McAfee is not totally wrong about it. Make of this what you will, but if you use your PC for anything else than simming, holding off until it is in the market place may be the wiser choice.

I sincerely hope this is in compliance with the COC as this really is not aimed at the provider of the service. I just want people to be able to make an educated decision of what they install on their PC’s. If you trust the third party to be secure and stay that way, that is up to you.

They should just provide a small program with which you can manually start and stop the service or choose that it should run automatically with windows.

Have you tried doing that through Task Manager (or the startup config for running with Windows)?

I don’t own the aircraft (yet). I know this would be a possibility. Personally, I would not have a problem with doing that but I think many people are not comfortable with fiddling around there.

The main concern for me is not that it is difficult to start / stop that service. It is about keeping your system secure. You have no idea what this service exactly does, if it would make your system more vulnerable etc. Maybe not something everybody is worried about (but that is I guess why hackers are having such good times

Understood. But do you know this about all the other services that are running in the background?

Correct, the point it is always about choices. Starting and stopping the service will only reduce the risk slightly. You decrease the window of vulnerability. So you have a higher chance that the compromised system maybe recognised as such in the time when you are not using it and control has been regained. This will do nothing for you however, if that state is not recognised and the very moment you connect to the network the potential harm is done.

This is a decision about trust. Your battle.net client, steam or whatever have you could behave in the very same way. It is just the question of how much manpower, time and money you think maybe be able to be allocated to keeping up the security of the entire system. None of the providers you choose to trust is ultimately secure. But you have to weigh risk and reward, the capabilities and conduct of the provider and maybe (though things can change over time) the services history.

With that being said it is just easier to trust companies that have provided similar services over time, than someone who is just starting out in this field. If it works, great for them. Do I have the trust that an aircraft dev for flightsims can compete in that market? For me personally? No, not for an airplane that I can have with a more trusted, albeit slower updating (market place) solution. But I am also biased in this regard because I work with the fallout from secure thought networks on a regular basis

If that does not deter you or you indeed have made the decision that MilViz has and will continue to do everything to keep the solution secure, more power to you. Then it is basically the same as steam or any other product.

Totally agree, and am working in the same business