Hi. I fly a lot between the UK and Ireland. FS2020 is missing most VORs & waypoints that make navigation impossible. On the east coast of Ireland approaching EIDW the LIFFY and LAMPO aids are not there. LAMPO is start of the ILS28 approach. The GPS and World editor/map simply add MAXEV as the only waypoint to the approach, also missing any altitude informaton. These navaids are widely available so other than licensing (money) issues I am not sure why they are not included. Another part of essiential flying.

You can always suggest the addition of new content in #self-service:wishlist

I just hopped in game, LIFFY and LAPMO (not LAMPO) are both there. 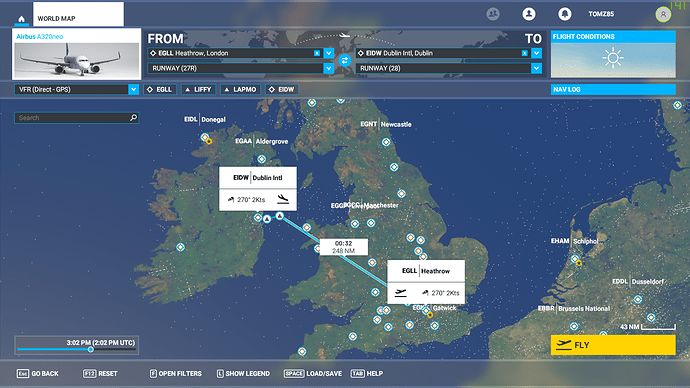 Hi Tom, I just checked again. They certainly are not in my version. I have had update #2 installed from steam. Any idea how many updates you have had?

Did you purchase your copy on Steam?

That’s quite odd then!

I got mine from MS Store. I don’t recall having seen an update yet…? I just downloaded everything there was on “opening night.”

Do you not see them if you search on the world map with the text box entry? Or is it if you zoom in on the map?

There’s also a “filter” option where you may have to turn on GPS fixes for them to be visible.

I’ve detected myself dozens of missing VORs and NDBs in Brazil - South America. What’s going on?

Can anyone confirm that these waypoints/NDBs/VORs are missing from the aircraft navigation systems (Garmin/MCDU etc) while in flight?

There is sometimes an issue where navigational aids are not found by using the search function on the world map but are nevertheless available while in flight. It is unclear from the posts here where these nav aids are ‘missing’.

If they are missing from the search function on the world map, they can usually still be manually added to the flight plan using the aircraft onboard nav computer (if one knows how to amend a flight plan).

In both scenarios (where they are actually missing) it is best to file bug reports with Zendesk, using the “submit a request” link on the top menu bar.

They are missing from the whole game not only from the AC systems. I tried to simulate a flight that I often do in other sims and couldn’t find 2 NDBs and a VOR which are all working in real life. Very frustrating.

Don’t know if you’re filtering anything but neither LIFFY or LAPMO are “Aids”. They’re waypoints. They both show for me.

I also missed one NDB in São Paulo - BRAZIL. It is DIADEMA NDB (200MHz - DAD) It is critical to triangulate the 9L approach in SBGR (the biggest airport in Brazil).
Is any way for adding those manually? Very frustrating …