Hi, is it possible to separate a livery of an aircraft from the existing aircraft category and put it in a new category? For example, Maddog has their MD-82s, MD-83s, and MD-88s under one tab in the menu and I would like to have them separated by the types. 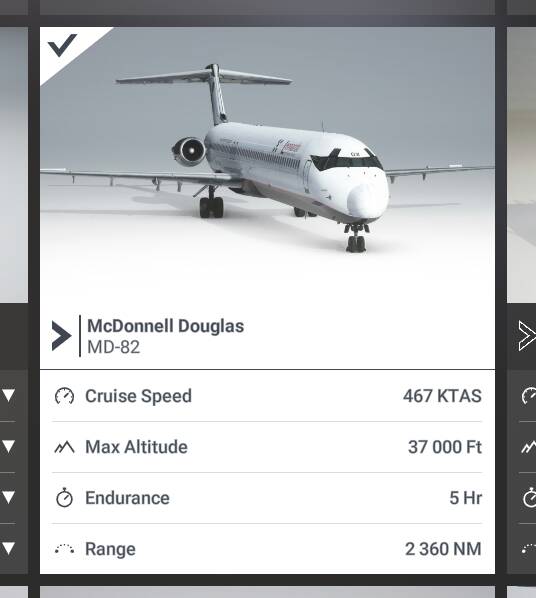 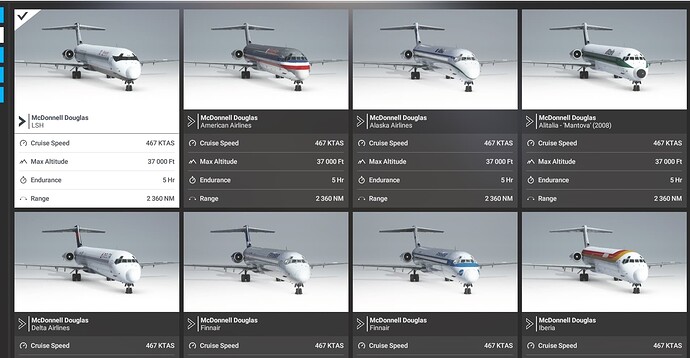 Yes, it’s possible. You need to edit each livery’s Aircraft.cfg file, and edit some fields so that it shows under different categories than their parent aircraft. I don’t have time to get into detail with you on this as I’m at work. But to answer your question, yes it’s possible.

Thank you for the reply. I’ve tried that but couldn’t find which field it is. Do you know which one it is? 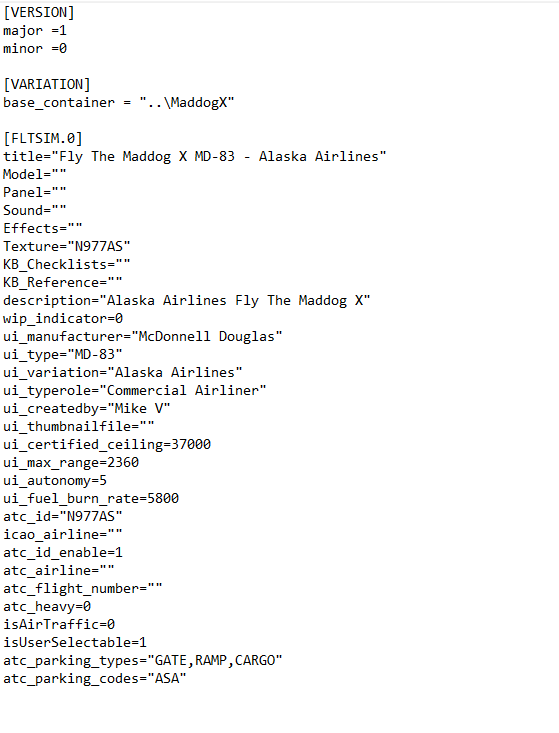 Uhmm. hang on, I’m trying to read your intention again.
So in your screenshot on the first post, you’re showing MD-82 aircraft. And the livery that all belong to the MD-82. So isn’t MD-83 aircraft already a separate aircraft so therefore if you want to choose a livery for the MD-83 you need to select MD-83 on the aircraft type first, and the livery for MD-83 will be inside it. To me that’s already separate right? Or am I misunderstood your intention?

I don’t have Maddog aircraft, so I can’t really tell how the aircraft is structured.

example:
there are 3 separate folders for 3 of the xcubs in 1 package
\Official\OneStore\Asobo-aircraft-xcub\SimObjects\Airplanes
so we can reference any of the 3 with the [VARIATION] section by copying 1 of these folder names into the base_container

It’s actually a combination of ui_manufacturer, ui_type, and ui_variation that would create a “new aircraft”. ui_variation will change the label but leave the plane in the same list as a livery in the plane.

In a single aircraft.cfg file, I’m not sure a second ui_type would be read, so I think you’re right, however, that you need to separate out the liveries you want with the new ui_type to a different container. That container can exist in the same package (under Simobjects/Airplane), so you don’t need multiple packages. The Black Box L-19 is also a good example, as are any aircraft that have multiple planes in a single package.

my example shows exactly what your saying to some extent, for those variants to Have a diff ui_type they would also have to have a separate aircraft.cfg so … a diff folder to hold it in under the virtual drive path (or relative path) of SimObjects\Airplanes
its possible to manipulate where they are in a mod but not in the relative path for the virtual drive i was talking about
are you certain the L-19 doesnt have multiple folders for multiple aircraft? if not they all use the same configs and are just diff visual models

Yes, what you just said is exactly what I was saying. I was just correcting that ui_variation would create a new aircraft.

And, yes, I’m certain that it’s one package with multiple aircraft, as are many 3rd party planes, and, yes, as you noted, there are multiple directories inside of Simobjects/Airplanes of the package, just as you noted. In the case of the L-19, each directory also contains a model and panel. In the case here, all you need is the texture directory and aircraft.cfg in each directory (with the base blahblah at the top of each aircraft.cfg)(assuming it’s all the same model, if it’s separate models/panels, then more work would be involved).

I’m saying all this off the top of my head, I’d have to look at the real structure to really say exactly what to say, but, everything you said is correct.

Point being, the person asking the question has a plane that was likely properly built for multiple aircraft from a single package, and to use that as an example.

yep, and to go a step farther you can share practically everything but the aircraft.cfg since its the ‘control’ file you need to change names 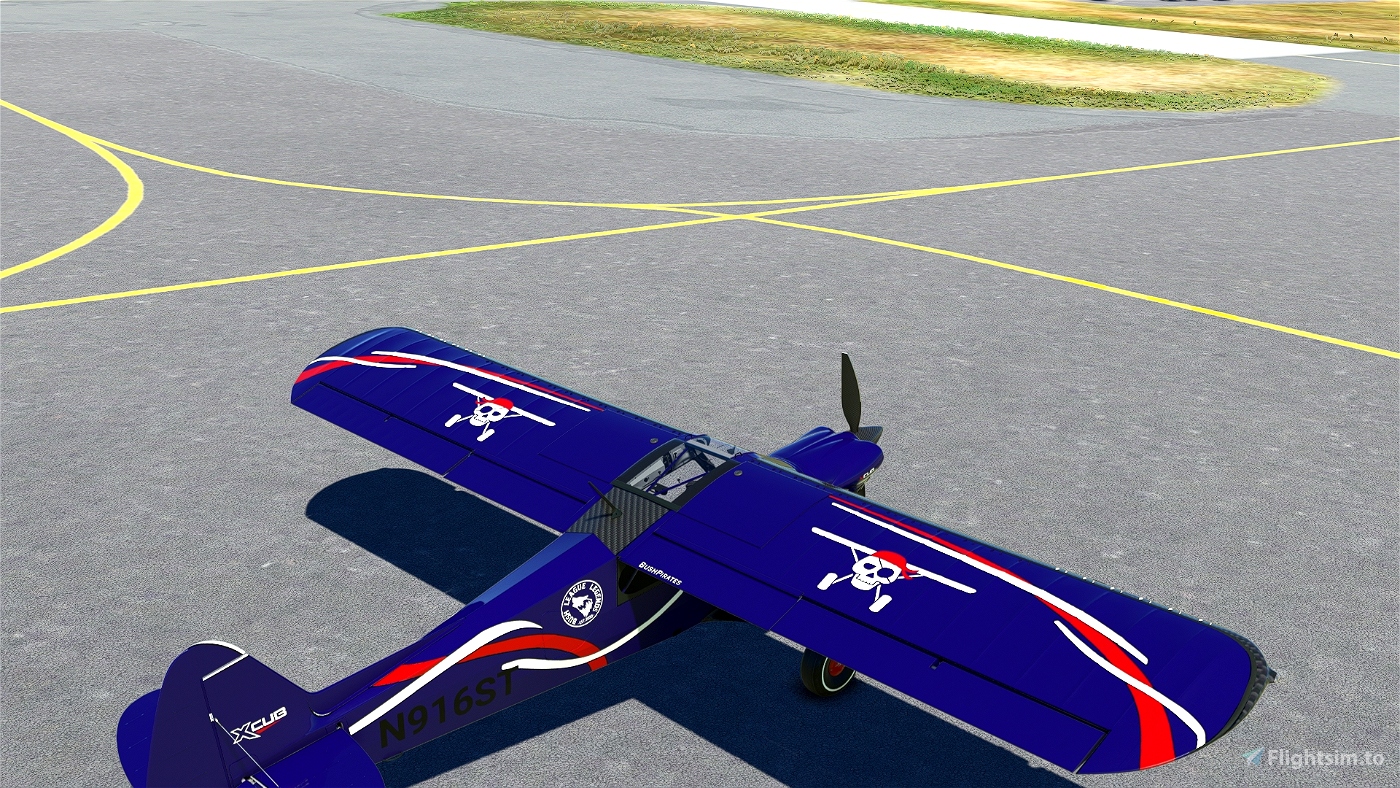 ✓ BushLeagueLegends Bliss Livery Pack is a Microsoft Flight Simulator 2020 mod created by EzRyder. Download for free to enhance your experience in MSFS 2020.

Hello,
Please ask “how to” questions to the community in Community Support (in this case SDK/Liveries) instead of General Discussion.
This thread was moved.

This should probably have gone in the “SDK/Liveries” section

Sure, that’s a good idea. Thanks for the suggestion!

No. All maddogs, MD-82s, MD-83s, and MD-88s are in one category. They are not separated in the aircraft selection menu.

So what part do I have to change in aircraft.cfg to separate the livery of the MD-83 from the rest of the MD-82s? I cannot change the base container because there is no other to choose from.

I’m at work right now so I can’t write up the exact file structure and aircraft.cfg content for you.
I don’t have the plane, either, so I won’t be able to test that it works. MSFS is quite finicky. In FSX, all you would have had to do is change the ui_type field.

I see… so how do you choose which one to fly on, if all three variants are in the same category? Do you have to “guess” which ones you want to fly only for you to end up with the wrong aircraft than you want?

It seems like a defect at the developer’s side. Any different model or variants of the aircraft itself should be separated in the aircraft menu.

You should report this issue to the developer. Splitting the aircraft structure without knowing what to do is a risky effort, you might end up splicing the wrong texture being applied to the wrong model.