And the previous one, attached to an error that had happed just before (msfs2020 related):

Got the Error with SU10 beta, Never seen it before. Is it DX12 related?

Most of the previous 942 posts have been asking more or less the same question.

There is light at the end of the tunnel though, as the devs are currently collecting logs from “victims” and will hopefully find a fix in the not-too-distant future.

MSFS team, thank you for looking into the issue.
My instance:

First time ever I see this message (though I don’t play a lot) - after WUX.
Scenario: 2H flight, CTD close to landing. Historically most of my CTDs happen on approach after a relatively long flight.
Specs:

I was doing really well and not having it even was able to complete several 6+ hour flights and now out of the blue im getting it again. Didnt even make it 30 mins into a flight

It is an odd one for sure, as i’ve not had one for days now and not certain that it’s anything i’ve done to try and fix it.

It’s possibly down to something else that the PC is doing, probably another Windows task(s), that combines with a peak in the demands that MSFS is placing on the PC and this causes a timeout that isn’t properly dealt with. There i go again. We’ll probably be best to just leave it to the experts.

I had it twice on beta an hour ago while i was on the ground. I was on DX11, so unfortunately it is not fixed on SU10 beta yet. Hopefully they will with the public release. It is very annoying and so random that you’ll never know when you’ll get it. I did 5-6 full flights this week without it and now i got it two times all of a sudden.

I am now flying the 4th flight with @F0rcey fix with no issues. All flights wewre made on IVAO and they were:

[Edit] All flights flown with Fenix A320

after flying for 1 hour or less I got the same crash. sometimes it comes directly when I load the flight and sometimes not. 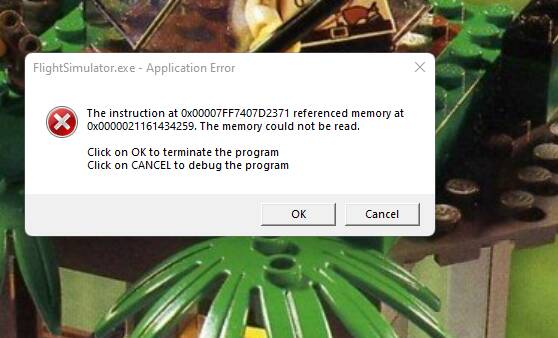 I can guarrantee this error to happen at Schiphol when I press End then use the ‘drone’ to roam around the airport. In fact, at any airport when I use the drone I expect this to happen at any moment particularly when I press F6 to increase speed but Schiphol seems to be a dead cert for a freeze:(((

Have managed to apply the ‘fix’ which was mentioned above and tch wood… it worked!!!
The key change seems to be to set the memory to -100

In my case the variety of CTD was changing in the last days. Before the change the flight duration was mostly more than 2:30 hours. But not in any case. Between those CTD-flights I could fly 5 hours and more, which generated the feeling, that the problem is solved. Now the CTD occur in some cases after 30 or 40 minutes. Not so often, when I use the Mooney Ovation from Carenado. The last CTD after short time raised up, while flying the Citation CJ4. With the FENIX I am in fear, when the flight is longer than 2 hours. But the flight time is varying, it is random and not depending of a certain flight situation or area. Sometimes with error message “memory” sometimes suddenly without any warning.
Technical specification of my system: AMD Ryzen7 5800X 8x 4,7 GHz, Mainborad MSI B550M PRO VHD-WIFI AMD B550, Nvidia GeForce RTX3070 8GB

Ok I give up on the last flight always with the Fenix A320 from SBBR to SUMU (3 hours flight time) as soon as I have begun the STAR I have seen a performance degradation up to have maximum 7 FPS. This has led to our friend “memory could not be read” at 2NM final.
To be noted that this is the first time that the simulator first degraded the performance and only then showed up the momery could not be read message

This issue is driving me crazy for two reasons:

with me the error occurred yesterday again for the first time after 3 hours flight with the PMDG 737. I am at the moment in the beta SU10.
The simulation stopped briefly and the error message memory could not be read appeared. I was lucky and could push the error window to the side and continue flying am then after about 2 hours landed refueled and dan another 6 hours flown without further error message. the only thing that did not work is after the flights to return to the main menu.
Error bucket ID was unfortunately none created ?

I am already using that fix. I am trying the flight again with the fenix livery to see if it was a livery problem 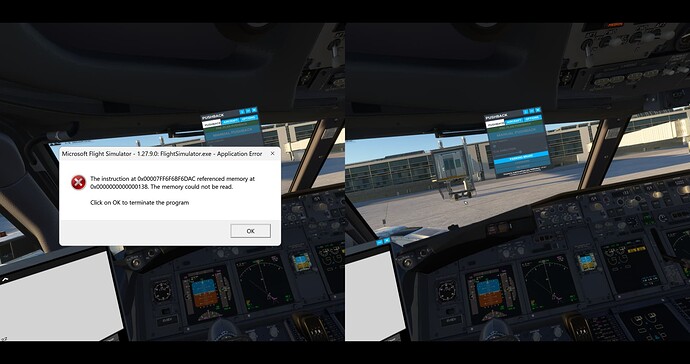 Not only that many of us are getting this error with low end machines and high end machines. It doesn’t seem to be picky. It occurs with Intel and AMD. The fact that their are people flying around some doing 10-12hr flights and never getting an error makes me want to scream! I see these people on Vatsim. It’s almost like some of us got poor code based on license numbers. You know you open the chocolate bar and get the golden ticket. I am almost to the point where I want a refund. I’m a afraid to doing anything longer than a 1.5 hour flight. I built my rig specifically for flight sim. Now I am using that the least and other games more. I’m really disappointed in this whole situation.

I have constantly had this issue for the last few months, For me turning off Aviation AI under traffic stopped it from happening and I have been flying now for over two weeks without the memory cant be read error. So for the heck of it I turned it back on, and what do you know the error came back. Josh