Excuse me, but are you a reviewer or here to promote the sim for MS?

I’m curious as to why “being a reviewer” conflicts with thinking this is the best value in the flight simulation genre by far.

I’m fairly sure that working in gaming journalism (which I have done for over 20 years now, so I’d know) does not equate to not being allowed with having positive views on a game (or sim).

Yes, among other reasons, I don’t use other sims anymore. As I said before, everyone has his part which is the most important for him and for me that is the weather, the presentation, the effects and the consistency - and please, if possible, without abrupt changes. Of course, the accuracy is important, no question, but if that is “punished” by abrupt changes, it takes away any immersion, which is a very big advantage of the MSFS!
Some of us have been “flight simmers” for a long time and many of us know the weather tools and the “options” like “prevent downloads and updates on approach” etc. The problem with METAR based weather engines are always the transitions even when updating the weather. I don’t know if this is so easy to fix.Then come the transitions between weather stations, so-called interpolations, then come the transitions between the forecast and METAR - but we hope for the best and that it is not more work than they think!
Metar’s are also not always “up to date” - and as one of the previous speaker mentioned, it would be best to reduce the forecast intervals as much as possible anyway (currently they are 12 hours each, please correct if wrong)!
Nowadays (everyone knows weather apps) a 1 to 2 hour forecast is pretty accurate (also related to storms), it will never be 100% accurate, even with METAR, but I don’t know now how accurate Meteoblue is there ? (use Windy app and it even has an API) !
I don’t know if this is a problem with data quantity or simply a “cost” problem, so I don’t want to judge that.
But we should not only read “the negative” out of this statement, but I understand that there are concerns, but Jörg is aware of this and they will certainly make the best of it.

In your opinion. Not everyone shares that view actually.

Nice write-up @Abriael. Pleasantly surprised by your report on the depth of the PC6! Looking forward to it.

Funnily, I was just doing some testing with the Porter. I’ve been working on it for a few days trying to understand whether the Beta is simulated correctly.

It’s really difficult to be sure without having piloted the real aircraft, but at least I can say that if you pull the throttle back to idle and pitch down 15 degrees, it will not overspeed even at -3,500 meters per second (barely) without flaps.

With flaps, it will stay planted under 85 knots (so it won’t overspeed the flaps) with a descent rate of over 2,500.

While I’ll wait for someone with actual experience on the type to make conclusions, it seems to me that Beta is simulated, albeit perhaps the braking effect of the propeller is slightly weak compared with what I’ve heard it can do. Again, take it with a big grain of salt until someone who knows better tries it.

Correct me if I’m wrong, but I’m having a hard time determining what exactly is new with the weather system based on this review.

Having METAR weather blended with Meteoblue was something we already had isn’t it? Having sudden transitions between METAR areas and general Meteoblue areas is something we were already experiencing I thought. I know I’ve always experienced it, especially with the wind and pressure. And low level fog is something I’ve seen plenty of times.

Can someone explain what features in the new weather system are things we haven’t had before? The only new features I can tell is more frequent weather loads and ability to look up the METAR itself.

I’ve been holding off on the Milviz PC6 to see what this one is like so it will certainly be interesting to see how it’s rated by comparison!

Can someone explain what features in the new weather system are things we haven’t had before? The only new features I can tell is more frequent weather loads and ability to look up the METAR itself.

If my memory serves me correctly they spoke about this in more detail during this Q&A - Live Dev Q&A - October 20, 2021 - Community / News and Announcements - Microsoft Flight Simulator Forums

And low level fog is something I’ve seen plenty of times.

The best the sim could do was draw clouds on the ground, which might have coincided with reported low visibility conditions mainly by chance. METAR reported visibility wasn’t implemented (or forecast model visibility for that matter), but apparently is now allowing for haze, mist, and fog without a cloud layer.

Flying into LAX, this scene for example: 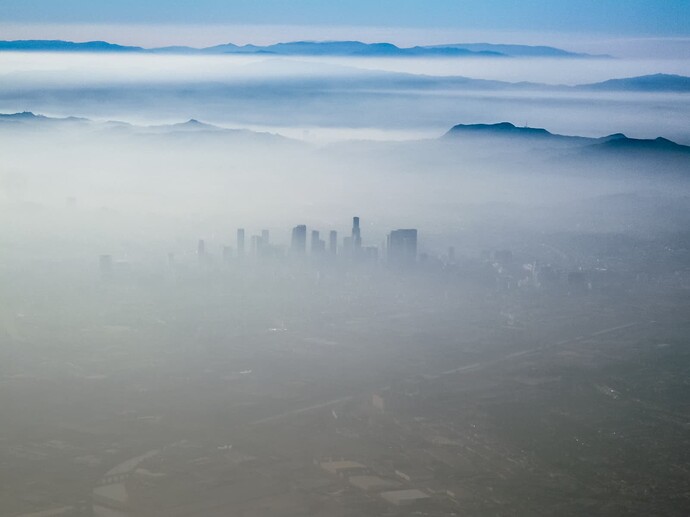 …wasn’t possible until SU7 according to the posts above and dev discussions.

I can agree with this. I think many folks have some very legitimate complaints with certain aspects of the sim, but despite its issues, I still think MSFS is a great value if you spend time actually using it.

With just shy of 1000 hours of flight time, I calculate the cost of the sim, my payware addons, and the hardware and external tools I’ve purchaed, and it’s basically cost me about $2 per hour for the time I’ve spent in it so far. And that hourly cost decreases as I spend more time flying.

I don’t know, but anything that can keep me this entertained for that little money is excellent value to me.

I can agree with this. I think many folks have some very legitimate complaints with certain aspects of the sim, but despite its issues, I still think MSFS is a great value if you spend time actually using it.

I agree, and this is what I was getting at, not trying to disparage the biggest fans of the game.

It was marketed to be this extraordinary thing and fell short of the hype in several ways. Which is the norm of course. And it is extraordinary value for the quality, and that quality is great when compared to the only other two options: Burger King and Arbys

But hold up a second, I ordered a double cheeseburger, and I got this other sandwich instead. But some people are saying I should be happy with what I got because the meal only cost $5 and they threw in a happy meal toy. Yeah, I want the thing I paid for even if it is mass produced to be as cheap as possible. That’s not an excuse for botching the order.

I don’t know why this is such a bother that you’d have to bring up protecting your mental health lol. Some of you guys are way too emotional. I mean if msfs doesn’t have anything to offer you, there is xp, fsx and p3d. I find it hard to believe that you can’t use one of the 3 sims in the way that you want, ie no toy planes, perfect weather and ai traffic, perfect atc

Thank you @Abriael for this great review and also the interview with Jorge. I am curious if you have noticed any additional performance improvement with SU7?

In your interview with Jorge, he mentions the AN2 as an upcoming plane for the sim so I’m wondering if the next World Update will be corresponding Russia. I guess we’ll all know in a couple of hours!

…
I love people like you who try to lecture me without knowing anything about my life and experience in flight simulation… But no hard feelings man, fly safe and have fun in any sim you like

It was marketed to be this extraordinary thing and fell short of the hype in several ways. Which is the norm of course.

Agreed. Despite the fact I still love MSFS, I can’t help at times feel like I’ve been sold a bill of goods that haven’t yet been delivered. I have no doubt it will get to what was advertised at some point, but so far it’s fallen short of what was advertised. Although to its credit, it’s moving in the right direction, despite some occasional steps backwards.

In any case, I’m still enjoying it. And I still recognize the achievement that MSFS is, breaking new ground with technologies that have never been used in this manner before. But I also understand the frustration many folks have. And I share some of those as well, despite my enjoyment of what we got.

There are normal models as well, not only racing versions?
That’s great news!

Did they fix the Bushtrips perchance?

Thank you @Abriael for this great review and also the interview with Jorge. I am curious if you have noticed any additional performance improvement with SU7?

performance for me was pretty much identical to SU6.

Thank you for the review @Abriael.

it’s fallen short of what was advertised

I sometimes wonder about this.

Has it really? Or have people somewhat latched onto vague ideas and allusions from various interviews and decided that this is what was “advertised”
After all I’ve read through and watched a fair few of interviews and Q&A’s with the various players in the Dev process and in many ways these seem to feature a lot more in the way of vague ideas of where they would like to go rather than concrete plans of where they are going and how they are getting there (and when)

To quote an old song that proves true of many things…

“I have squandered my resistance for a pocketful of mumbles, such are promises
All lies and jest, still a man hears what he wants to hear
And disregards the rest”

It’s moving towards what was advertised. And I have no doubt it will get there. But based on what was promised in the promo material before launch and what was delivered, it came up short in many areas - particularly weather, which has been very problematic. It’s looking like with SU7 (based on early reviews) that weather will finally be in a state where it matches what was advertised.

Look at all the promo videos that showed 4K Ultra at uber frame rates, incredible water masks, etc. None of that was possible or even in the sim until the last few updates.

That said, there are a lot of folks that have unrealistic expectations - like the soon-to-be-terribly-disappointed crew who are still convinced that DX12 in SU7 is going to bring with it immediate huge performance gains.

would love to see some screen related to this in SU7