My 6900 XT: Is it defective becuse it overheats or not?

Three days ago I installed the 6900 XT, replacing my 2060. At first I was elated with more than doubling of fps from 25 to 60’s. However, when I went from short test flights to longer ones of 5-15 minutes I always got CTD. While investigating with Afterburner stats I discovered the GPU was at 99-100% at weird times (e.g, while msfs was doing nothing awaiting input at the welcome screen) and GPU temp was also near 90. This led me to suspect the GPU was overheating so I contacted Sapphire support but got inadequate answers. (Note that this happens in VR with only default settings, which were only slightly better than those for the 2060. I can make it happen in 2D [at Ultra] by flying close to ground fast.) I’m hoping somebody who understands graphic cards could tell me what’s supposed to happen if one gets too hot. Is their some governor like mechanism that slows it down or something? Is it a failure of that mechanism that’s causing the CDT (and sometimes reboot)? It seems to me there is nothing I can do to prevent the overheating from happening. If that’s true, does this indicate this is simply a defective board and another one might work? That’s the option NewEgg is offering me or a store credit (which means no new GPU.)
(BTW support said remove then replace AMD software which I did without noticeable difference.)

I have the 6900 xt too so here’s a few tips. First the afteburner software in the past has been known to conflict with the game. That was a few months ago so I’m not certain if anything changed in that regards since then but I would uninstall afterburner and install the AMD software to control your GPU. It’s great software so there’s no need not to use it and avoid the potential conflicts with afterburner.

Regarding the temps, by default the fan settings are low, set to only 60% capacity so even when they’re spinning their fastest they’re still slow at that percentage setting. You can use the AMD software to up the fans. I run mine at 85% setting.

Lastly, I find that limiting the framerate works wonders. The AMD software has a feature called “chill” which you can use to limit your framerate. When you do that the GPU doesn’t have to run at 100% usage because you’re not pushing it so hard and the benefit is you get cooler temps because you’re not pushing it at 100%. It also helps eliminate microstutters because there’s some headroom. In VR I limit my frames to 31 fps. The sim runs smooth at that framerate, microstutters are reduced and the GPU runs much cooler. It’s all good. You can choose the framerate you prefer but in the chill settings you’ll pick a min and max framerate. For this game it runs at the min setting so make your setting there.

The 6900 xt paired with the G2 is great for this game so good luck getting it running smoothly.

Yeah same here. Radeon Chill set at 31 fps and a custom fan curve that keeps my 6800XT at around 60C in MSFS, despite a hefty overclock. My gaming case has five fans, plus those on the PSU and GPU and I can control the case fans to ramp up via software. Radeon Chill also means that the card is not thrashing itself needlessly while you are in the menus, or alt tabbing to do something else.

Cool Runnings with the G2.

I installed a 3080ti a few weeks ago. My System was like a heating so I joked I don´t need to switch on the real heating in my room in winter times. But it figured out that in Nvidia controls “Maximum performance prefered” was switched on, so even in idle, the card had around 38% Power and was up to 60°C warm. Maybe you got something simmilar to switch of in the AMD settings. I think this also had an impact in the higher performance moments. Never reached peaks up to 84°C again. Maximum is now around 70°C with excellent performance.

Those new grafics cards are real monsters. Especially in heating. Make sure your Case gives a good Airflow. I was replacing my old case due to preparation for the new GPU. And it turned out it was best desicion. Times, where components need to fit in a case are over. Nowadays, you have to build everything around GPU and CPU. Especially Cooling.

I am also using a 6900 XT GPU.
Limited frame rates from within the game → Vsync on / 30fps. Did not use Radeon Chill
Powerdraw is very low in the menu’s. (50W)
As mayhem6633 already mentioned the fan setting curve is tuned for silence.
You can adjust the fan profile so that they spin up fast to their maximum rotation speed, in order to get temperatures down. It does get a little more noisy…
Do not forget to adjust the fan profile again after each driver update, as this triggers a reset to default profile
I also added some more case fans…
Have not had any problems with afterburner yet…
250W constant powerdraw and temp around 80°C

Much to respond to in your post. I’m not sure what you mean by “spawned in”. What would the GPU be doing when nothing is happening on screen?

That GPU’s control temperature by throttling back “speed” seems a very direct answer to my question and strongly suggest my GPU is defective. Though based on other comments, more testing may be warranted.

I have been running all my flights in test mode even though I don’t have addons.

I have done no overclocking of the 6900 XT at all. I’ve only used afterburner to get the readouts of the operating parameters.

My computer is pretty new but I did clear out any dust.

I’ll check the fans and look into chill. Thanks .

Thanks for these suggestions. Regarding Vsync on 30 fps, that option is in the PC section of General Options, not the VR section. Do you know it does in fact apply to VR anyway? If so, are there other options in the General section that apply in VR?

I want to add a new bit of data. Twice today, while just checking settings in MSFS the program did a CDT with no flying whatsoever! Just on either the Welcome page or the Options page. It is hard to believe this does not reflect a fatal flaw in the GPU HOWEVER, for some reason I an unable to monitor GPU temp with either Afterburner or any other app I have (Radeon Software, Aorus APP Center SIV.) So I can’t say for certain these crashes were the result of overheating BUT the RS Performance page was showing 100% Gpu utilization.

I’m not sure what you mean by “spawned in”.

“spawned in” means you loaded a plane and can fly it in the world.

What would the GPU be doing when nothing is happening on screen?

The simulator does not have a frame limiter for its menus, so it will render as many frames as possible. You can limit frames by using the V-sync option in the graphics settings.

That GPU’s control temperature by throttling back “speed” seems a very direct answer to my question and strongly suggest my GPU is defective. Though based on other comments, more testing may be warranted.

Im not sure what makes you believe that your GPU is defective, as GPUs will maintain a balance of performance, efficiency (power draw) and temperature. If my card is not properly cooled or its summer and really hot, my GPU will try to do less work to stay at the same temperature and preserve itself.

Sorry, no VR here. Cannot answer.
Did you stresstest your GPU? Furmark, OCCT, …lots of programs out there

my GPU will try to do less work to stay at the same temperature and preserve itself.

Your statement above is exactly why I think my GPU is defective. You point out that your GPU is sensitive to not only the demands of the workload place on it will limit it’s output (decrease frame rate, anything else?) in order to preserve itself. But mine seems to shut down the program placing a demand on it whenever it’s stressed. How otherwise to understand it’s CTD when only displaying the Welcome menu screen?

A graphics card that is defective or has a malfunction in its ‘preservation’ system will flat out crash windows, give you a blue screen of death or make your screen entirely black.
Because its only the simulator that crashes, it makes me believe that it is software.
You can easily verify by looking at the logs:

In section 1 you need to find the simulator. The icon on the left will be a red exclamation mark I put an example below: 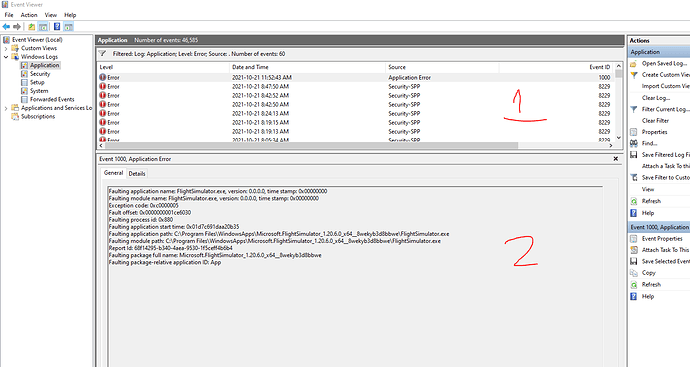 image1458×777 59.4 KB
You can see the crash that i had. In the General description i can see the Exception code 0xc0000005. Sometimes this code can be useful to identify what happened.
The Faulting application path can also help. sometimes, it will indicate an exe, sometimes a dll. This can also determine where it comes from.
3 Likes
mtjoeng October 21, 2021, 11:53pm #15

Had a GTX 1080, installed a Liquid Cooled 6800XT (always below 60°C, plenty of heat coming from radiator).
Had lot’s of crashed with new AMD software install, after much testing I found that NVIDIA driver leftovers in Windows was the problem. Uninstalling NVIDIA drivers was not sufficient. Had to delete all NVIDIA leftover folders and files.
Even better, reinstall Windows, install AMD, see if this helps with CTD’s. AMD drivers are/behave very different from 10 years of NVidia drivers.

Thank you so muc for this information. I’m checking into it. Quick question:

Does this “cpumetricsserver.exe,” possibly indicate the CPU overheated?

Later: OK, it looks like you’re on to the problem. Many Applications Errors for MSFS.

Does this give you any idea why i started getting CDT coincident with new GPU?

I’ve marked this as a solution because it worked wonders for me in that I set a min of 30, hoped into my plane and flew with wild abandon through the canyons of Chicago. However, when flying elsewhere it became clear to me that it seems to always fly at the minimum rate regardless of what I set as the maximum or where I fly, even flying high over open ocean. So I don’t understand how to increase visual detail since it seems that doing so wouldn’t slow my frame rate until maybe I go so high it starts stuttering badly or something? Suggestions how to proceed appreciated.

Yes, you got it right. The minimum setting is the one that does the job in this game. I have mine at min 31 and max 45 but it never goes above 31.

Basically the way the chill feature works is it runs at the minimum unless you start moving your mouse fast. The theory is that when you play a game, when there’s fast action and you need higher framerates that you will be moving your mouse fast. That’s certainly the case in first-person-shooters but in our game we don’t ever move the mouse fast so we always get the min setting. Anyway, that’s how it works.

Glad you got something helping your temps and CTD’s. Good luck.

So I don’t understand how to increase visual detail

Another poster mentioned one time that he has his settings as follows, 200% in OpenXR and 50% in the game render resolution. I tried this and I love it. This is how I run the game now. The reason I mention it is the visual detail, for me, is increased with these settings. Other people don’t like these settings but many do. So give it a try!