At the start i was stucked because you have to download outside the sim an update, then when i started the Sim something weird happened, where i turn on the vr?

So after looking around i found on the options and graphics the menu for set up the vr and the button for turn on it.

I have to say it, why don’t put a button in the home or a menu? However, i found that there were a few command to setup like centering the view, or turn on and off vr, translations vr camera, but if i was clicking on these menu for assign a key button nothing happens, so i have to looking around and understand how to find a way to set up these commands, after looking in keyboard commands menu i found the way to set up those keys searching vr on the combobox name.
But I didn’t find anything for set up the traslation that was important for slide horizontal the camera o changing the distance, something similar i found in cockpit camera but not vr and of course those commands don’t work in vr.

By the way i started the vr and it was everything low resolution, i though wtf? I was running the sim in ultra settings and now looks like everything is so poor.

Ok i tried to set up and surprise if i put an higher resolution everything starts to go slowly and it means its so much for my pc, so i didn’t realized that vr would need more power, ok a bit more but not so much, btw i setup everything nicely and at the least a few things are high resolution and other ultra and it goes smooth.

Another problem was the camera all on the left and even if i was pushing the button for centering the view, i never was at the center, so after looking around not without stress ahaha, i found the option to move the camera in the “option” menu, and set up the horizontal view and the vertical position.

Everything was perfect so i started to fly around, and the feeling was so much emotional, remember that I’m a real student pilot so i always has been frustrated to don’t feel the sensation of fly and feeling the aircraft, instead now I was having the right prospective view of the runway, of the wings, of the cockpit, and my landings or my straight level flight was absolutely perfect!

Thought the experience was great, the pixels in front on me was poor, in fact i was seeing like a poor image of the deep scenery, gauges were not so bad though they were low resolution but readable, the images more distants like panorama or everything more distant of the fusolage it was like pixeled like in 480p or less, and that was terrible for me, because it broke the immersive experience of the vr.

I hope this would change once I’ll receive my Hp G2, because i want see distant objects or labels or scenery in general very clean otherwise like I’m experiencing now the taxi labels and the ability to look faraway and recognize the area would be impossible.

And you guys, what are your first impressions in this vr release?

Thanks for sharing.
I have the G2 running on 1080Ti / i9 9900k and the scenery is still blurry in the distance. Flying low’n’slow is a great experience and the landing challanges is really nice to play, but flying into airports at night with lots of light on ground makes me try to focus my eyes, but its really the rendes scale that makes it into a mashup.
I cannot get it as sharp as sen on videos, but it is still great fun to fly. Need to play around with my settings to get the best combo of Quality vs. fps. FPS is really not the problem, but getting a more detailed picture of the distant objects.
Aircraft model and cockpit is OK. After playing HalfLife ALYX for a coupple of weeks I expected all text in CP to be clearer, but it is all a game of give and take in the settings department.

I don’t know if can be helpful but i find that if you go in windows settings, and virtual reality headset and you scroll down you can select best quality and the 4k resolution, normally in default is lower for optimize resources, look this screenshot 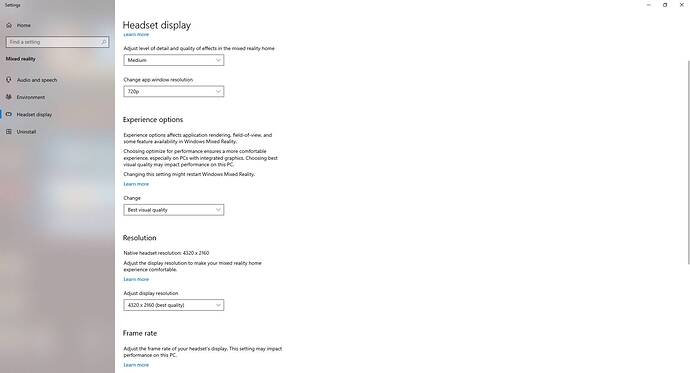