It looks like there’s something wrong with the airport night lighting, at least on Xbox, after Sim Update 6. Distant lights continuously flicker, especially runway and taxi lights, but also overhead lamps and smaller buildings in cities.

It’s probably not fully visible on the videos as the captures are too dark, but it’s quite distracting in real. It looks as if resolution has been lowered, or the upscaler doesn’t work properly on lights, hence the excess amount of flicker. I noticed the same on terrain objects like fences while taxiing.

This video perhaps demonstrates it better. Watch the runway as the aircraft approaches and lands (best viewed in full screen mode): Approaching runway at night

Edit: I removed the Xbox tag from the title as the issue is confirmed to occur on PC as well.

That’s the point as they flicker during movement. When the camera is stationary the lights “settle down”, and as soon as you move they flicker all over the place.

also flickering not only for xbox but also pc

in my case, the taxiway lights directly ahead of my aircraft also blink out before coming back on after I pass. In addition to the flickering runway lights.

I’m having the same issue on PC. Flickering lights and missing taxiway lights as you approach them. Perhaps the thread title can remove Xbox from the title since this seems to affect pc also.

It is even worse when approaching during rain. In addition to the flickiering, the raindrops on the windshield now seem to block the smaller “bulbs” entirely making the runway hardly visible during night time.

You’re right, I removed the “Xbox” tag from the topic title.

SU6 makes everything worse on xbox. Flickering night lights, Ghosting when moving, Framerate drops and still crash to desktop very often. The only good thing i have recognized is that the jetways do not disappear anymore. I am very disappointed. Before SU6 it was more fun to play.

Having same issue, rwy lights not visible sometimes before landing 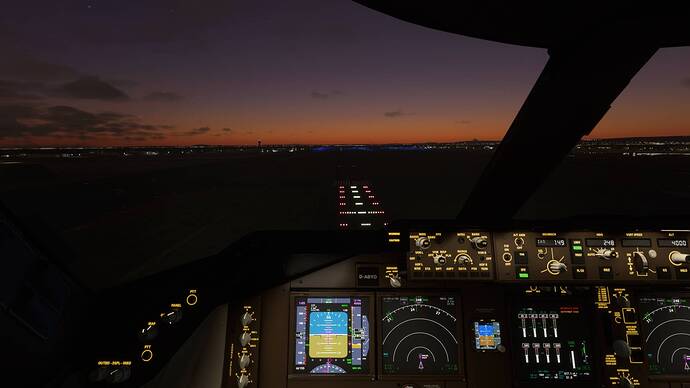 Def on PC as well. And not just taxiway and centerline lights but the PAPI coming into KSNA was blinking on and off like a Christmas Tree!

This is an issue that should be addressed immediately by Asobo. Multiplayer aircraft lights also. It is all a great, big bug.

That looks like what happens when it redraws the screen for higher resolution. Does your tv support VRR? You can try turning that on in Xbox settings to see if it helps