No Longer Checking For Updates On Startup?

Anyone else having an issue where the sim no longer checks for updates on startup, instead going straight to the loading menu/bar? This only started happening after I installed SU9…

I could have sworn that has happened to me a few times since SU9, but the last two times I’ve started it, the updates screen has appeared.

It is still there, just a lot faster. Happens directly after the Blackshark screen.

Appears it now starts in the background as Asobo/Blackshark screens display and if you happen to hit the server at the right moment, it’s done and over by the end of the Blackshark screen, thus you would not even see it, unless there are SU or WU updates. I’ve only seen it 3 or 4 times from 5 or 6 starts.

However, remember to check you Content Manager manually. The Checking For Updates, doesn’t notify you about content updates, never has. It’s only meant to check for SU & WU, probably Hot fixes too.

How about the “All download completed” (top right) that is now appearing at every start? What could that be? Just a left over from the now very fast “check for updates” may be? 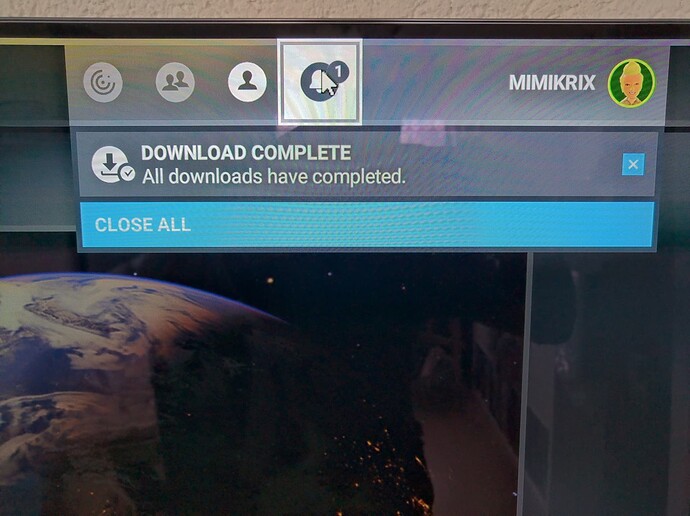 This message appears now every time I cold start fs2020 (I’m on Xbox).

That’s a different issue than this topic…
Try search for that one.

Why exactly do you assume so? Just pure coincidence?

I don´t know but I have the same problem after SU9 Update.

It made the 28.04.2022 development update. But it seems it made it in the background because I haven´t see the Update. After the SU9 Update I can´t see the start Update. But I see Blackshark and Asobo Logo.

Maybe it is an old notification

Have you clicked on the blue X or ‘Close All’ to clear the notification?

Tried both and all variants: still keeps coming back with every cold start.

HI, I have de same problem. no Checking for Updates screen since may 3 2022. I read that may be normal. I hope so. But if someone have a explanation or a workaround, I will be happy to have it.

Every time you launch the game, it will seemingly redownload “core packages” (that weird ~100MB thingy in the content manager). No idea what’s really happening and/or where the bug lies exactly.

Marketplace/content manager seems very glitchy on my end since the beginning of this week (can’t download a package, namely “Vessels: Core Library”, stuck on the infinite redownload loop).

Using a PC with the Store version, I notice that after SU9 there is a launch screen now that starts immediately upon launching the sim. It has status text in the lower right of the window, and one of the texts is “Checking for Updates”. This launch screen disappears as soon as the sim starts to use the screen.

The same thing happens to me when the simulator starts loading, suddenly a small window has appeared with the TBM 930 that did not appear before and the screen searching for updates that it had before does not appear, I hope this is not a problem for future WU and SU updates. I will be attentive in the next update. Please comment in this thread if I update you in the next WU or SU.