I have moved the Community and Official folders to another drive as per the recommendations. All is working fine. These two folders are on a traditional mechanical hard drive. The primary MSFS installation is on a fast NVME drive. The questions is…should the Community and Official Folders be on a different NVME drive for performance? Or is it ok to keep these folders on a mechanical drive with lots of storage and the primary install on the primary NVME drive.

All SSD for community folder drive…that is plenty fast enough

Well I have 8TB of NVME’s and 1TB of SSD’s but I have recently moved some stuff around. I put MSFS Community folder (I use an add-on linker) so only planes go into the Actual community folder everything else goes in the Add-on linker one… Anyway I have put over 320GB of Community add-ons mainly pay ware airports on a Seagate 2TB mechanical drive and aside from a slightly longer load up time, no other issues, no jerks while things load. I tested it at Fly Tampa KLAS 4K Ultra settings, everything maxed… no difference, aside from as I said the longer sim start up time.

For this reason I am leaving it on the mechanical drive

Yep, there’s no difference other than load time. It’s just a drive, but most people prefer faster load times

I had to large grinders in my system I never used, thought what harm can they be … took them out and boot times are much faster.

… no difference, aside from as I said the longer sim start up time.

Yep, there’s no difference other than load time. It’s just a drive, but most people prefer faster load times

I second this. The load time is the only diff, I notice no in-game diff SSD vs. spinner. My Community is on a spinner for the sole reason that while SSDs are getting cheaper the cost/GB on spinners is still v low and I can get huge drives for much less than a same-capacity SSD.

The main reason being the Community folder grows massively and will rapidly overwhelm my primary drive (an SSD). So I keep Comm on a spinner and it works awesomely. The longer load time doesn’t bother me, I brew a coffee and by the time I come back to sit down the game is ready.

Aren’t there differences in in-game loading times when approaching a big addon airport for example? I have sometimes the system hanging for a couple of seconds when some heavy sceneries get loaded. Maybe a fast SSD/NVME can help.

I wouldn’t have thought so. If you think about it, if you can stream scenery from the internet, you can load it from a spinning disk. In fact for some continuous reads and write operations spinning disks are faster (although you wouldn’t come across these in flight sim).
There was a guy in another post asking about upgrading from 32Gb to 64Gb RAM, no better as it doesn’t use it. People seem to get hung up on buying more kit thinking if they have bigger / faster tin it will make the Sim run better. But if you already have the recommended spec or better, you often end up spending money for the sake of it.
Back on the disk question, the other reason to opt for SSD might be that it’s less susceptible to physical damage, but in game performance should be fine after loading. 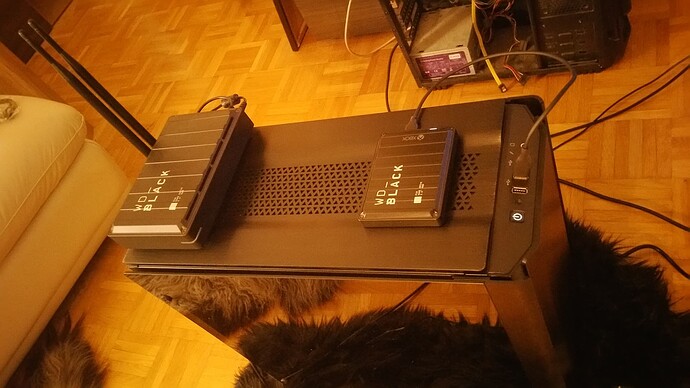 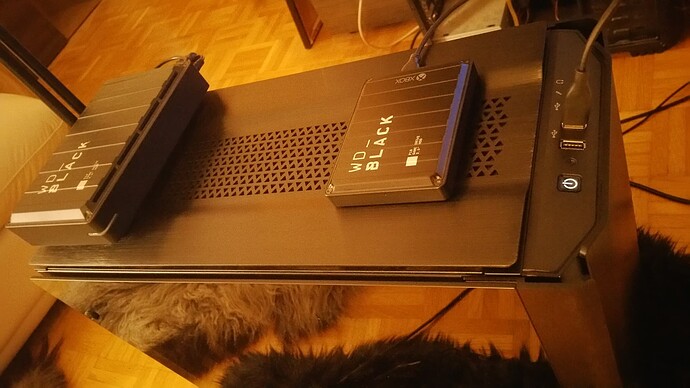 (Ignore the old dusty dirty PC in the background this is my backup PC straight from the basement because my BIOS update failed and I needed a second PC to get a new BIOS on a USB stick.)

But please be aware that P_10 and D_10 drives are loud.
If you have build an ultra-silent computer like I have these mechanical drives (and a typical undersized only 2-slots air-cooled graphics card with undersized cooler fins and only two 70-85mm fans, if you have a graphics card build into your system) will be the loudest parts of the computer.
These drives emit a significant amount of noise that sounds kinda like what is called “white noise”, especially the D10 with it`s 3.5" drive inside is loud. Only the Iron Wolf NAS drives are louder and give a significant and very nasty clicking noise while running.

I think you got it the wrong way around. It’s the Official / Community folders that should be kept on the SSD, since that’s where most of the data is, all the content - models, textures, sounds etc. You can put the installation folder there as well since it’s just a few GB.

If you don’t have enough space just buy a cheap 256GB drive and put it on that. The mechanical one you can basically get rid of in 2021 or use it for backups. It’s a major bottleneck in any modern computer. Personally I got rid of all mechanical drives in my computers around 2012. I only use them in a network storage.

The community folder on a mechanical drive - sounds like a good idea!

Sure… if you want to slow down the load times as much as you can. It’s the exact opposite. The Community and Official folders are where most of the data is read from. They should be on the fastest drive available.

If I had any need for 14 terabytes of data storage no game would come anywhere near that PC.

It would just be a data node.

On my gaming/entertainment PC I’m fine with about 3tb total over three nvme.

I would be interested in the actual speed benefits / cost and basicly wasted fast drive space. My main MSFS and its official community folder are on an NVME, however all my add-on pay ware airports etc are on a normal mechanical drive. I do wonder if everything was on an NVME is it just wasted fast space? I dont mind 4-6 mins for the sim to start, as that is the only effect it has.

Not all of my pay ware is needed at once, I have airports all over the world in MSFS, so in my head I think why do I need to waste valuable fast drive space with all this when its not going to be needed all the time, id rather have HALO, Vanguard, my racing sims etc on the fast drives. Also is it even good for an NVME to doing all these little read/writes? These are just questions it is just the way I see it, and for me a slightly longer start up time, and it is only slightly longer is a good trade off.

Landing at large airports with tons of additional scenery makes no difference at all, no pop up, no stuttering, no lags, nothing.

each to his own i say, i will give my experience just for the sake of discussion tho

i started out with the OS and installer on an nvme sdd and the “Packages” (Community and Official folders) on a newish hdd (sata3 7200rpm WD Blue)
with the medium version (Deluxe) vanilla game (no Community mods or Marketplace addons beyond the base game)
it took almost 5 mins (4mins 52secs) to load (tested from desktop to parking spot at my local airport), i did also have some minor stutters very rarley when in MP and in high density scenery
then i finally bought another nvme, load times where close to half (2mins 38secs), it also seemed to have less stutters but that well may have been wishfull thinking on my part since i did not do very extensive testing before adding back the addons i had started using by that time

NVME all the way. Mechanical drives are a thing of the past and sloooow as heck compared to a modern day Nvme drive such as a Samsung Evo. They’re also more reliable since they don’t have any moving parts to fail (remember the old clicking hard drive failure sound?). There’s no question between the two. I will say, for the cost saving I do use a mechanical drive as my backup drive that I make a fresh image to of my music, flight sim, and general use machines. 2TB of SSD is far more expensive than a 2TB mechanical drive. And being it sits unused 99.5% of its life there’s less risk of failure from constant use.

ssd drives (sata or nvme) are great but they do have some down sides (in addition to cost), you should always leave some extra room for temp files (particularly on the OS drive) the way ssd’s use temp files they can burn out fast if you run them completely full - they also dont have the longevity of hdd drives but if used correctly they last plenty long enough
the other issue is if they do go out, they go out Completely, as opposed to hdd’s which can scan and remove small bad blocks allowing you to recover most of the data

Not true at all. I’ve worked as an IT Technician for some of the largest law firms in the world for 22 years (I know, roll your eyes) and I can tell you from personal experience mechanical drives fail way more often than SSD/NVME drives. On the way to lunch I mentioned this to my boss (she’s been here 35 years) and she said, “No way are mechanical drives longer lasting than SSD!”. We have over 800 machines in my office, all have nvme drives, and replacing a failed drive is almost non-existent here. We’ve had some mini-desktops that have been in use 6+ years that were still going before they decided to switch all machines to laptops.

SSD / NVMe drives typically last a lot longer than spinning disks. There’s no hard and fast rule though. In desktop machines and laptops, spinning disks are more susceptible to knocks and power change events which can damage them. But if you take data centre storage (which is a better example as they don’t power down sometimes for years) spinning disks typically have a shorter lifespan, although SSD and NVMe usable storage decreases slightly over time. In saying that we have hundreds of SAS spinning disks in an HPE 3Par array that are still going strong after 7 years, but that’s in a stable data centre environment. We don’t have a single desktop or laptop with a spinning disk these days.

At the very least, I’d be running from a SATA SSD. Those things are cheap as dirt these days. Mechnical drives are really only good for mass archival storage these days. They’re just too slow.