Hi all,
just flew around NYC, but was impressed with the quality of the buildings. 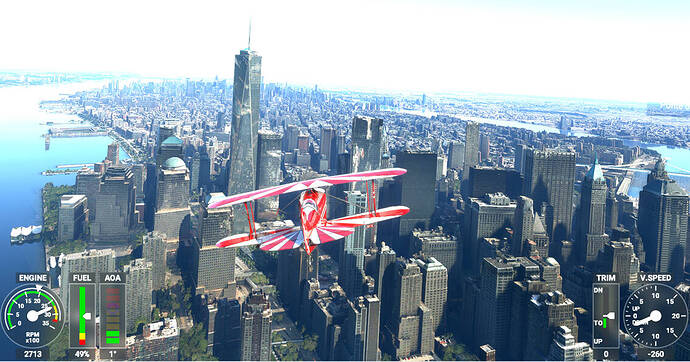 it looks like an abandoned city, with buildings that are wearing out. Photogrammetry setting is On and Global Quality is Very High, internet speed is about 100Mb. Where is the problem?
Thanks in advance

I’d wish I had a solution but unfortunately I can only share your observation. It’s been reported by many in different topics.

The suggestions vary from “bad data flow” to graphical settings, lowering LOD settings, you name it. I had hoped the USA update would have enhanced this but NYC remains a ‘lost City’.

I tried every trick in the book but my NYC is exactly the same as yours. I can only share your concern. 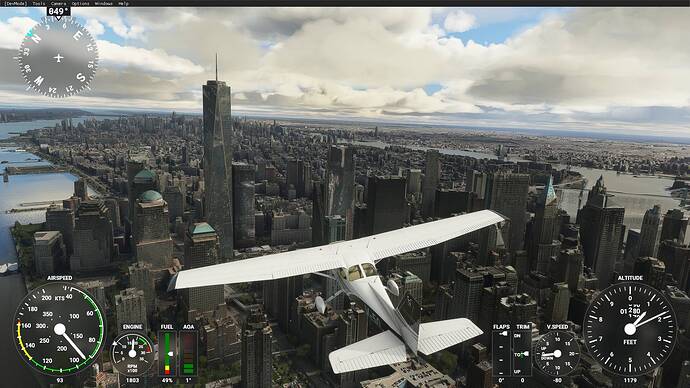 I agree. I have a good cache allowance and 100 mb internet and had even downloaded the area for “better” results but naaa
It looks like the city survived a fire
The lightning at night is poor, too standard.
The US update should have left this city as a jewel.
I requested DDesign to do the city as they did in P3D but seemed not interested he told me he would do Chicago instead and he did.
I requested Orbx to do the landmarks but they have said nothing. It is a real shame such an iconic city (the reason for which I bough the sim) looks so bad.
Pity

Some-one correct if I’m wrong would it even be allowed to fly this low over NYC/Manhattan?
Apart from that, I think ASOBO had to make choices in terms of high detail of the scenery and smoothness of while flying.
In order to combine both to the fullest, you’d need at least an i13 CPU, an RTX5090 GPU with 128 GB Vram, 512 GB Ram, Dx16, liquid nitrogen to prevent melting of the rig and ultra highspeed glassfiber.
Those still aren’t even close to pre-reality.
I have flown around NYC a few times and was already pretty impressed.
My bottleneck however ( fps <15) was simply caused by the hardware on my side.
Last time I visited NYC IRL, I saw the city from the observerseat in the cockpit of a 777.
Believe me: even though KJFK is just around the corner, you won’t see the city this close.
To end this reply: I didn’t wrote the above as a ‘rant’ but only wanted to put things in perspective.

I am pleased with the results, considering @GONEFLYING1234’s previous post I think it’s a pretty good achievement given today’s computing limitations. 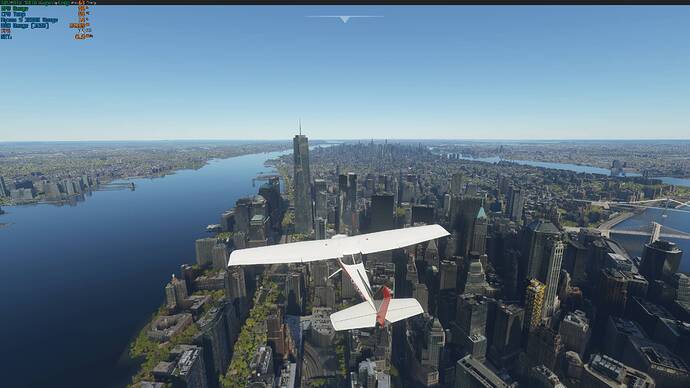 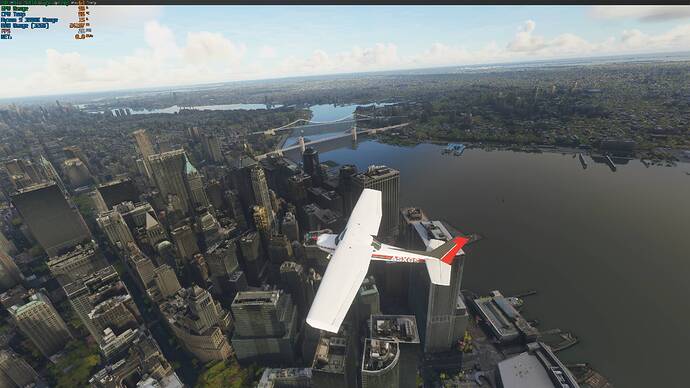 I tried every trick in the book but my NYC is exactly the same as yours. I can only share your concern.

Maybe it’s the compression of the image but it looks like you don’t have TAA enabled? That improves texture quality which might help. But photogrammetry texture quality especially on taller buildings is pretty rough especially if they have relfective surfaces which will look odd as a lot of artifacts will be baked into the texture. Not sure there is much you can do about that until a 3rd party dev improves it with replacement models.

DaffodilGlue317 sounds Dutch to me? correct?

Some-one correct if I’m wrong would it even be allowed to fly this low over NYC/Manhattan?
Apart from that, I think ASOBO had to make choices in terms of high detail of the scenery and smoothness of while flying.

I doubt you would be allowed to do a ‘between building’ flight, but that’s the fun of FS right?

Asobo started a huge project and I enjoy (almost) every flight. Of course we (the users) as well as Asobo have to be realistic about the enhancement of the performance and graphics. The sim is ment for a wide group of users with different hardware configurations.

I’m convinced that, if Asobo wanted, they could have made the sim absolutely stunning already, but low-end users wouldn’t be able to use it. Asobo must find the balance to make the sim accessible for a wide range of users. That is quite a challenge but also the fun part of developing.
I also think they can’t observe the whole world by their own so that’s were we come in. Not to criticize them but to advice them about parts of the project that need attention. These points of attention are (of course) very user dependent.

Maybe it’s the compression of the image but it looks like you don’t have TAA enabled?

Thanks for the tip but TAA is enabled. I’m also afraid we have to be patient and stay realistic about future developments. I know Asobo’s developers are just as impatient as we are. Besides that, many errors were solved in the past few months. So things can only get better (gradually).

There is nothing “wrong” with your settings or MSFS2020 in generall.
NYC simply has rather poor photogramertry 3D data and rather bad textures on the buildings. That’s all.
So until they implement better data of NYC, it will continue to look that way.

Furthermore, but that seems to be a bug or just poor “optimazation”: When you approach NYC from far away, the LOD is very bad. So for a long time you see a very low res version of the city. Most buildings just very basic shapes. Often not even cubic (as they are) but low res triangles. Looks terrible.
This problem does not exist for example in San Francisco.
Even from far away, downtown San Francisco looks ok.
But NYC is just terrible from far away with very low LOD. And from close up (like in your sceenshots), well, there you simply see the rather bad 3D data. Especially the textures of the freedom tower (new world trade centre) are terrible.

So you are satisfied with the look of those buildings… good for you.
I hope a developer makes the city
Cheers

Take a look at any flight sim available and all add-ons for those flight sims for NYC and tell me any of them look better than what we have available in FS2020. No developer is gonna get their hands dirty with a PG city, there’s not much point neither incentive, perhaps someone could port the city over from google, that would be possible and anyone could literally do it, but it would take days, if not weeks to get it perfect, what’s more is the results wouldn’t be very far off of what we have at this time.

Being able to fly where we “shouldn’t” is one of the joys of this sim. I put an XCub on the roof of a Target store that sits past the end of a runway at KMSP. If you’re not ripping through your hometown below the treetops, you’re missing some great fun.

I agree on that so far is the best. Maybe I had higher expectations that’s all
Cheers

Being able to fly where we “shouldn’t” is one of the joys of this sim.

I agree
The drone camera for me is an invaluable feature

World changing when you discover that the drone can be made to move pretty quickly. I just learned that last week. Let me be the first to say “Derp?”.

It sure seams like the trees have gone wild in NYC. Surely something easy to fix for a future release?