You have a simulator that advertises bugs and CTDs! That’s cool. I mean they all have them, but yours advertises them. Send me a link please.

Phew, and there was me flying over Bristol (uk) at FL26 thinking that the engines on my CJ4 had both caught fire…ITT warnings going off, huge power loss, big speed drop…I actually went an did an emergency shutdown relight procedure on engine 1 before I noticed it was rather hot outside… 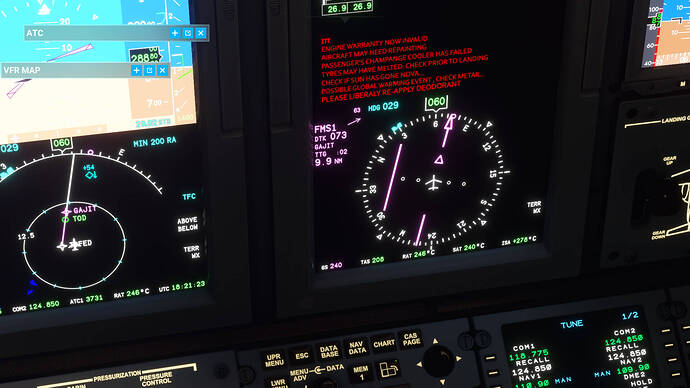 I would be very upset as a passenger, my Champagne warm…what kind of private jet company you running

…knew I should of gone easyjet.

That’s just the Asobo way of telling us that Global warming is very real folks!

No communication about the issue, just nothing. So we have to wait again. For how long? Days, weeks? Next WU ? Time will tell (again) Ridiculous for such a game breaking issue.

No communication about the issue, just nothing.

Really?
Can we please put an end to this?

Check out the latest Development Update here: Please use this thread for feedback and discussion. Thank you!

Have a read. Testing the fixes starts Monday. Update to be released, “ASAP”.

Just because users are not reading the announcements does not mean Asobo has not been communicating AND REPAIRING!

Well, I’ve got some nice steaming hot caviar to go with the champange…

MSFS is one year in development…

I think the original idea was that support would be provided for 10 years.

Funny how that has morphed into development now. The sim was in development long before launch.

If you don’t want to wait for the fix for this issue, and still want something pretty close to using live weather, using Rex Weather Force is an alternative. It’s unfortunate that SU7 also broke the Unreal Weather mod, but the dev for that is working on an update.

It is in development since 1982 if you think about how every version was build on the predecessor.

Year and a half since the release and the sim is still a mess. Never ever in my life (I’m 45) had to deal with such a problematic software.

Hmm, I guess you can interpret it like that… many of the other bugs since SU7 affect me very much as well, but they mostly have so far quite well working workarounds. This one doesn’t and it affects everyone of us. Also it wasn’t something introduced with the last update, but a sudden change from one day to the next in the background. Further, I think I have said to be patient and that we will have information on the SU7 bugs this week, not necessarily to wait until Feb. And lo’ and behold, we did get the information and a coming patch. I just expected them to fix this issue in the backend without combining it with the rest of the items they will be patching on the client-side.

A reminder to all:
Please keep the focus on providing constructive feedback on a bug/issue rather than on others. Off-topic, non-constructive posts will be removed. Keep the Code of Conduct and SOP in mind while participating on the forum. Thank you.

To be fair, it would also be nice if someone from the Dev team provided updates to the community on major bugs like this - whenever this happens, it’s radio silence from Asobo which creates a breeding ground for negative, off topic slandering in these threads. Just my 2c.

It’s ok from my side, the comment by @Warp757 does not necessarily need to be hidden.

For 2c I would be happy to introduce you to the “scroll up” button.
This bug has been acknowledged by the developer, communicated, fixed and testing is scheduled.

Really? Can we please put an end to this? Have a read. Testing the fixes starts Monday. Update to be released, “ASAP”. Just because users are not reading the announcements does not mean Asobo has not been communicating AND REPAIRING!

There are already thousands of comments about this on the forum today. Please add this to one of the dozens of threads on this topic.

Multiple posts already on this topic:

something is wrotten in my Kingdom !

Speaking of bugs… The bug that disturbs me most is one on this forum. It seems that only some can see all the posts, because we have to keep repeating the same thing over and over.

I am over Pacific Ocean, between Midway Island and Hawaii at FL310 and just had OAT skyrocket to 250C.

When are they going to exit Beta for this product???