I’m pretty sure it works for both : ) as rift uses same oculus software, debug tool etc. Actually know one rift user that used that solution and also wants to kiss me so I guess it works. Try it and let me know. : )

No white flashes for me on the Rift S. I followed the instructions you posted, skipping the section on the quest link option. I also wasn’t able to find the Graphics Preferences option, so it’s probably just quest 2. It works great, thank you very much.

I was hoping it would fix the terrain skipping as well, but it didn’t. I get nice smooth graphics when I turn my head around in vr, and the terrain at a distance looks fine, but looking at the closer stuff out the left window of a GA aircraft, the land doesn’t move by smoothly, it skips. I haven’t figured out how to fix that yet.

Glad it helped. As the skipping goes have no idea how to help that. Maybe it’s perfomance problem? did you try to change fov to 0,7/0,7 in ott or oculus debug tool? that give some extra performance but has to be done every startup (easier with ott, one click). Also asw 18hz? another big one.

Do I just copy it over and rename my existing one? What’s the remaining 11gb that’s in my oculus support folder?

woah I guess the code they implemented must be that much bigger comparing to v24 or maybe there’s additional contenet? maybe oculuses houses, oculus environments? Which is ■■■■■■■■ mostly? oculus homeless is the way to go

and you don’t have to erase your support folder just rename it for the the time being, call it “2support” I did that. And then put my support and those two files according with my instruction. So if you will feel it’s worse (different systems, different outcomes?) you can revert by just erasing mine and renaming the old support folder.

So I would not paste one over the other. Just rename the old one (after you stopped oculus processes, and put those two files where they belong according to instruction or oculus will force update to newest glitch fest that’s v26 :P)

Cool do I just drag the staging and Tmp over to the oculus folder and that’s it? They not there to start with

Lastly what will happen when the quest 2 when it gets a new update say v27. And the oculus app on pc is still v24?

if you don’t have those folders there then just drop the files. If you do, erase the folders first. The files are simple txt files without extension their role is to block oculus software from creating folder called temp and staging because those are the ones in which it stores new updates. So basically they block new updates.

absolutely nothing. Have v24 on pc and v26 on quest. Those are not connected in any way what so ever.

I dont know how you figured it out, but you made me a happy man. V24 rocks, this is how it should be… this is amazing, its like I got new eyes for flying. butter smooth too.

Love it man. Glad I could help. I was as amazed as you are. Couldn’t believe that I could squeeze this much from my 1050 ti, 4gb vram card in mfs2020 vr. And it’s not just mfs2020 any vr game that in theory shouldn’t work with my gpu works pretty awesome now.

As the main purpose of a zip file will be to create a compressed version(s) of the file(s) within, depending upon the compression ratio that can be achieved with those files, it is possible that the 1.2GB zip file might contain 12GB of extracted files.

Maybe extract the zip into a temporary folder and see how much space the extracted files take up.

he’s right v24 extracted is like 1,2gb compared to v25/v26 I suppose those are some oculus homes, environements that take the space. So unnecesarry stuff either way. Oculus homeless is the way to go.

ah ok. it looked like he was talking about the zip itself

It’s defo the home environments and avatar that’s missing as they not loading etc.

I did not have any issues with other be games on v26. Just MF. How come the version still says v26? Not complaining I’m chuffed it working again as it should. What has oculus fond to break this?

I’ve saved the PDF and will apply the suggested changes, as and when I get moved onto V26.

Perhaps fortunately, in this case, it looks like I am towards the end of the distribution list for Oculus updates.

V25 was acceptable for me. Occasional flicker say 1 every 4-5 mins. I would be happy to stay on v25. But now v24 is installed I do think it’s slot smoother. All the same, we should not have to mess around finding fixes to solve these issues we are all facing.

It is as I have really weak gpu I felt updating to v25, it could be not as noticeable on better gpus so worse perfomance of v25 flew under the radar. Pun intended. But I definietely felt that in mfs2020 and other vr games, that’s why I’m staying with v24 it’s way better. As to why it says v26, nothing to worry about, some file in other oculus folder would have to be replaced to change it, not worth the trouble.

you can erase temp and staging folder from oculus folder now (if you have them) and create two files called exactly that “Staging” and “tmp” and erase the .txt extension from the name so the type change to file. Then put those files into your oculus folder and voila it will not update to v26 until you erase those. Or you can go all in and just revert to v24 with the pdf. I recommend that.

that’s how it should look 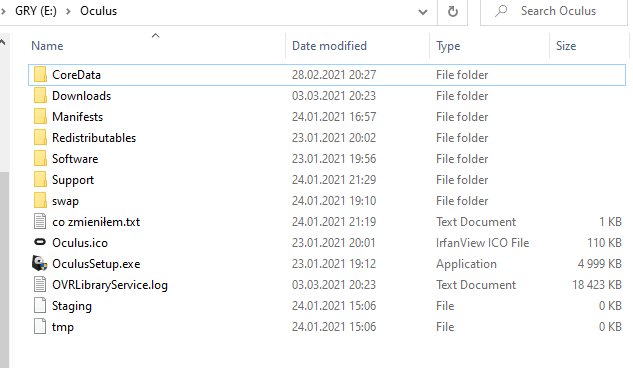