Only for Windows 11 Insiders - Performance?

Many of us have the same issues and problems.
As Kilimbus has already asked, could you tell us your build? 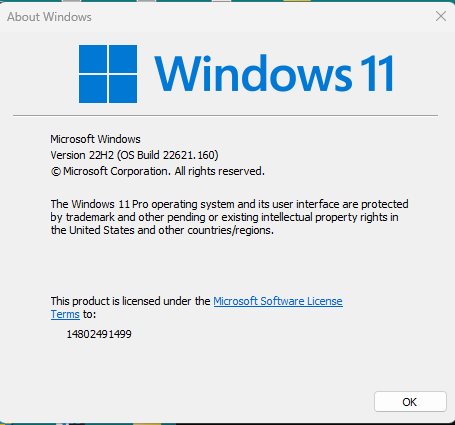 The most recent insider build 25136

The Varjo doesn’t use Windows Mixed Reality, correct? I’m wondering if that may be the bad combo.

I am wondering the same thing as well!

BTW, today in the Microsoft Store there was an update for the OpenXR Developer module. I did the update but not had the chance to test it yet, hope to make it for tomorrow.

@mbucchia is an OpenXR developer, I am surprised he is not (maybe) aware of this issue for a such long time. I don’t play the gale for almost 3 months now while in the past every evening I was having my flights. VR is unplayable, 2D mode is ok but was perfect once.

I repeat again, I logged the problem in the Insiders Hub Feedback and is still under investigation for 3 months now!!!

I have an update left from another Insider user which he posted last night: 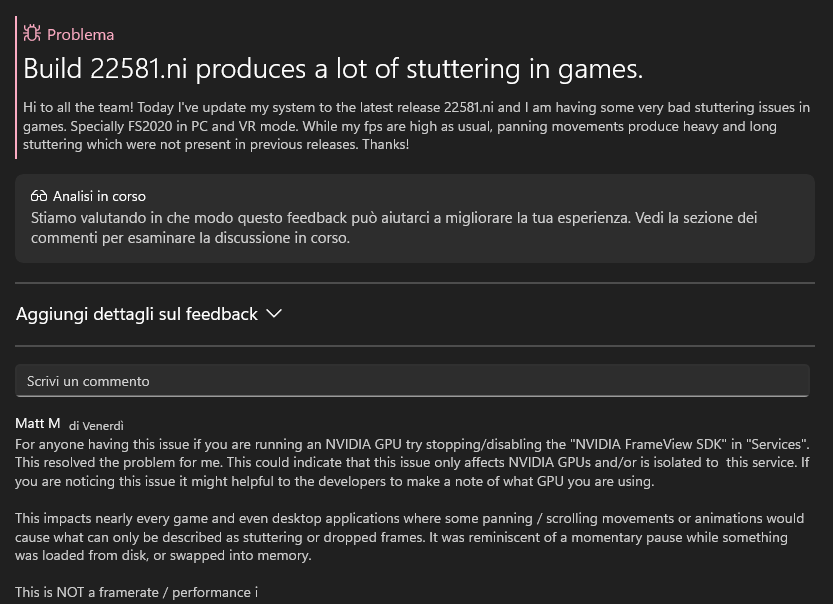 Tomorrow I’ll try it at this point, let’s see…

Well, I’ve tried the tip but didn’t help at all, situation is the same.
In my case is not the Nvidia FrameView SDK service.

You seem to be conflating Windows and OpenXR (incorrectly). I know nothing of the Windows 11 side. As far as I can tell, this thread is about people using beta versions and getting poor results, which seems like a risk you were willing to take when you opted for the beta program(?) Also check that you have HAGS off, it seems to kill performance for many people.

Just to clarify, Windows 11 22H2 is no longer in Beta. This issue is not about Beta versions of OpenXR.

This thread’s title is “insider” which as far as I understand is preview (beta) versions of the OS. Hence my comment.

But as with many threads on the forum things digress out of control and honestly I have no clue what is even being discussed.

I undestand this is not related to OpenXR. Hence my reply about not knowing and not being able to help. Since I was tagged I felt that it was the polite thing to do and reply

Looks like someone filed a feedback hub issue, which is the right thing to do.

That’s correct it uses its own software. Varjo base but I also do use OpenXR toolkit for scaling and colors

I own Quest 2 and Oculus does not even support Windows 11 for a long time now. They are adding beta support now with version 41. Until now, there’s a FPS drop all of a sudden at random circumstances killing my experience. Their answer was that “they don’t support Win 11.” an OS which is almost a year old. Such a shame.

Hello and thanks for getting back, first of all it is very kind of you.

I thought about you as the issue many people we are having is both in 2D and specially VR mode.
I understand and accept completely the fact that a Beta release may produce defects and issues but this is the reason why a Beta exists at the end. We test and we comunicate our findings and defects.

Now, after 3 months, we are on the Windows 11 22H2 and the problem is dramatically still here. Anything we load is unplayable, stuttering, jittering even if the hardware is capable to do more, which actually it does as the high FPS are clearly there. Then it stutters heavily everywhere…

So, as you are in the OpenXR development I thought it would be a good idea to officially let you know about the problem as many users are suffering, specially in VR mode and till now we’re without any communication or clues of what’s going on from Microsoft’s part. I am used to Beta programs in a different way, the dev team communicates and is transparent about the issues.

I was the one to log the bug in the Insider Program:

The situation is very sad and we have no clues how to go on.

Thanks again and take care!

!!! Always include a problem recording !!!

The steps are outlined here starting 8)

Send feedback to Microsoft with the Feedback Hub app

Problems received without a capture are much less likely to be actionable by developers. See why below.

Don’t assume that the problem is easily reproducible

I read in your report “It’s very easy to reproduce”. Let me tell you from experience: it’s not. A very very very large majority of issues are specific to interference from 3rd party software/drivers or configuration changes made by the user. In all likelihood, no developer in the OS team is able to reproduce your issue. We run pretty stock machines, without 3rd party software like the majority of people on this forum do.

Don’t assume it’s an issue with the OS

If the issue is with some state or configuration written in a permanent location, updating the OS will not solve it, since the state and configuration is carried over.

It just seems to resolve most of the problems (reasons explained above). It sucks on the moment, but if your issue has indeed persisted for 3 months now, it’s likely a necessary evil.

If you are running a version of Windows capable of multi-boot, consider dry-running the OS build you plan to install using a VHD. You can then test the performance. I think there are services offering to download these VHD images.

Hi and thanks again for dedicating your time here.

Thanks for your suggestion but there is a history behind this, it’s not the first time I finding this issue. It happened the first time with the Dev Release before Christmas, I did a fresh install that time, moved to Beta and then the second time when the Beta and Dev merged together under the Build 22581.ni, since then, the defect is always here. Same HW configuration no changes

When I posted this issue 3 months ago, I’ve included a video which was showing clearly the problem.
I’ve posted other reports too with more detailed description and capture screens as well. I don’t know if the Devs received the video and capture screen material succesfully.

The fact is that not having a feedback by the developers, asking what info they’re missing, if they can reproduce it and so on, makes everything a bit more difficult.

I’ve noticed that many users are having exactly the same issues so it seems a bit strange to me to be only my HW setup or a 3rd party software/drivers,installed on my system.

And to end, as you suggested, probably the only solution right now would be to reinstall everything from scratch but I need time and the right moment to do so…

I don’t want to take more of your time, it is already positive you got here.
Thanks again for answering and for your suggestions.

As I said some things I said might not apply. But to this point:

Videos and screen caps are no help at all for investigating performance. You need an actual feedback hub recording (the instructions I pointed to). This is an actual recording (called Event Trace Log or ETL) of several “probe” points in your system. This will capture many of the things happening under the hood, that no video or screen cap will show. I repeat for future reference, videos and screen shots are absolutely no help to developers for performance issues. The only thing that helps is the capture of the repro.