I am running an Intel i9-10900K processor cooled by a Noctura Air Cooler. Never any problems running MSFS until the last upgrade. The core temperatures now go up to as much as 80 degrees centigrade after running flight sim for awhile and the computer automatically shuts down to protect the processor from damage. Anybody else having this issue?

My laptop hits 90°F with no issues.

Something else is going on, unless those readings are incorrect. 80 degrees is not an issue at all (borderline high, but absolutely not dangerously so), and the CPU does not turn off at all when getting hot; instead it throttles (slows down to generate less heat).

I would recommend getting HWiNFO64 and checking the temperatures there to see which temperature exactly you’re looking at.

If it is actually shutting down due to temps, check the BIOS/EUFI to see if that cutoff point can be adjusted.

I highly doubt 80c on the cpu would automatically shutdown your rig. What is the size of that Cooler? Is your rig getting adequate airflow?

Yeah, that is a big problem. My I7 doesn’t run that hot even with the latest SU5 and patches. I’ll happily trade you, so you don’t have to worry about that heat. LOL.

My PC is actually cooler since the fix, especially my GPU. Frames are down though. I haven’t been seeing the 70s that I saw pre-fix.

There is something wrong with your computer. Your cooling is not doing its job.

I have an i9-10900KF myself, never bothered looking and my PC doesn’t shut down but I will take a look in a bit.

Like a few others have already said I don’t think the 80 °c is going to damage the CPU. I would also be surprised if this is the reason for the PC shutting down.

I would however be interested to know what temp. your GPU is running at and what PSU you are using.

How much overclock do you run? (But as stated before, 80C are absolutely harmless. I run CPUID HWMonitor, it is a free, small programm which lets you monitor most system parameters, see what max. clocks, util, temps it shows and if all fans are running).

Thanks! I just assumed it was an overheat problem. Maybe it is still an MSFS crashing problem. I have a Noctura Air Cooler. The temps were check using Core. 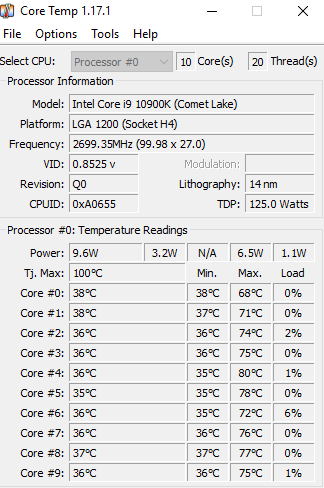 Yeah, those readings should be perfectly fine. Though MSFS issues shouldn’t be able to cause your computer to turn off, either!

It could be a power supply issue. What GPU and power supply do you have?
I’m thinking that perhaps SU5 caused your GPU usage (and therefore power draw) to increase, in turn overloading an undersized or broken PSU.

If that’s the case, limiting your framerate to about what you had prior to SU5, assuming it was lower then, should “solve” (work around) the issue.

THose temps are all very reasonable for that CPU under a reasonably heavy load. Unless you’re regularly hitting over 90ºC or see your CPU thermal throttling, there’s no problem at all.

Thanks for the response. I shouldn’t think it is a power supply issue. The computer has Seasonic GX850 850W + Gold power supply. It has an Asus ROG Strix Z590 Gaming Mother board, and the video card is the Asus RPG Strix GeForce RTX3070 08G Gaming Card. It is cooled by the Noctuar NH-D15, which should be more than sufficient. The custom-built computer is only 4 months old and has never had a problem shutting down before the upgrade. This is really puzzling!

My frames are down too, some stuttering. A lot like pre SU5. With the increased draw distance and better resolution I will happily keep it the way it is. Most stuttering comes when I am panning the view. Probably just need to tweak a few settings back to pre SU5 levels and everything should be good.

The custom-built computer is only 4 months old and has never had a problem shutting down before the upgrade. This is really puzzling!

Hmm yes, I agree. So does it shut down fully? Fans stop and everything?
Does it start by itself after or do you need to turn it back on?

Though TBH regardless of your answers I don’t really have any suggestions except for the boring ones, such as trying a different PSU.

I suppose a simpler test would be to simultaneously stress the CPU and GPU in some other way, whether by games or stress test software (like Prime95 + a GPU heavy game, or OCCT) and see whether that works or not.
I would be very surprised if this only happens with MSFS; it seems far more likely to be a hardware issue that has so far only been triggered by MSFS.

Thanks again for all the responses. The computer shuts down completely and then restarts by itself to the home screen (no programs running). Again, this has never happened with any other program and only started with MSFS after the upgrade.

Agreed 100%. I’m very happy with the trade off. The sim looks much better in this state.