I guess I’m ham handed, really didn’t notice anything however I rarely actually have much stick time. Once I’m off the ground it’s trim and push buttons/turn knobs.

I will say the trim wheel could use a few more notches of less sensitivity but I’ve learned to handle it more like a spring loaded trap.

When you are out of options, you can of course edit the elevator and aileron effectiveness in the flightmodel.cfg files of the airplanes.

Ya, cause thats what the consumer should have to do, manually edit code. How about Asoblow just gives the sim less effectiveness for the flight controls? I’ve yet to see a single complaint about the sim not being sensitive enough…

@Volczi
Definitely no complaints about a too high sensitivity here.

T16000M, -33% sensitivity on all axis to compensate for the small stick size/travel compared to the real equipment-

Here you have one. All airliners are definitely not sensitive enough.

Or here: Control delay and sensitivity/flight model (All aircraft) - #178 by Iceman77W

It’s VERY apparent in GA aircraft. Like, its a polar opposite to what you’re referring to.

That’s alright, do you have any deadzone on your axis? Willing to try your settings. Are you just using a T16000?

I don’t think it’ll change much however as I’ve seen a plethora of people on here also mention sensitivity issues.

2% deadzone. E.g. a 0% sensitivity doesn’t make sense for the above mentioned reasons.

Agree with your thoughts about sensitivity in pitch and yaw, roll doesn’t seem quite as affected.

In contrast to PZL, I would always recommend a linear curve unless all other options are exhausted. Using a curve with exponential extremities is not how aircraft controls operate and It will create unrealisticly large deflections with minimal input when nearing the extremes (or even greater than 50% depending on the curve). Most normal sized joysticks and aircraft should be easily controllable using a standard linear curve.

Increasing deadzones will help a bit with sensitivity and probably be quite realisitic for GA’s. In most of the older and smaller aircraft I’ve flown, sometimes the controls can have a bit play, particuarly in the seat that is flown from most often.

Others have said editing the setting below helps out with sensitivity for the time being.

I’ve used both T1600 and airbus stick on this game. Rudder control has always been a problem on both. Tail on Plane is always pulling to the right as soon as it leaves the runway and very hard to control when landing. Acts like a big cross wind, and Ive notice on external view, my veiw is never centered on tail, but off about 10 degrees on the right. the airbus stick has had multable control issues on all planes, a380 at take off climbs steep and no way to level it , uncontrollable steering on runway when landing. Ive had every ms flight sim since they first came out and have never expeienced so many control issues. like flying , but this is so frustrating and have no idea how to make it work right

I did have a play with that but ended up leaving mine on 100%. It appears to just add a further control delay

In contrast to PZL, I would always recommend a linear curve unless all other options are exhausted. Using a curve with exponential extremities is not how aircraft controls operate and It will create unrealisticly large deflections with minimal input when nearing the extremes (or even greater than 50% depending on the curve). Most normal sized joysticks and aircraft should be easily controllable using a standard linear curve.

I have to agree.
I’ve just re-discovered Aerofly FS2 and I immensely enjoyed the realistic roll response of the Extra, the basically non-existing loading times, realistic bright cockpits, etc etc.

Contrary to MSFS and DCS you can’t adjust any joystick curves, it’s pure linear controls.
And guess what, it works perfectly, from gliders to the 747.

What I’ve noticed is that the sim only seems to use the inner 75% of the stick travel. Once I get to 75% the sim is reading 100% of travel in both pitch roll and yaw axes. Whilst it looks ok on the sensitivity settings, once in the cockpit you can see that at 75% of travel, the stick/yoke will be hard over, as are the flight control surfaces.

Of course I’ve checked the calibration and adjusted the sim’s sensitivity settings, to no real avail.

Anyone else seeing this on the same or different equipment? Perhaps this thing is just a bit too old…

Can’t confirm.
That’s the old stick/yoke animation bug which was in a similar way already present in FSX.

In FSX the virtual stick/yoke reached the end of its travel at ~75% joystick deflection.
In MSFS this movement is linear up to ~75% and than rapidly increases until 100% are reached.

If you look at the flight controls at the same time, you will notice that they (luckily!) perfectly match the joystick input.

The fact the controls dont appear to be 1:1 with your actual inputs is so bizzar. This really needs fixing, it creates a confusing effect along with all the other oddities in this game.

This one is even weirder:

MANUAL FLIGHT CONTROL INPUT CAUSES THE FLIGHT CONTROLS TO MOVE IN REVERSE WITH AUTOPILOT ENGAGED! Did anybody notice the weird autopilot behavior when applying manual input? This must be the weirdest bug (or faulty implementation) I’ve come across so far. It only seems to affect the roll axis. Bug description When applying manual control input with the autopilot engaged, the autopilot can be seen steering the in-sim yoke in opposite direction of your control input to compensate. When giving … 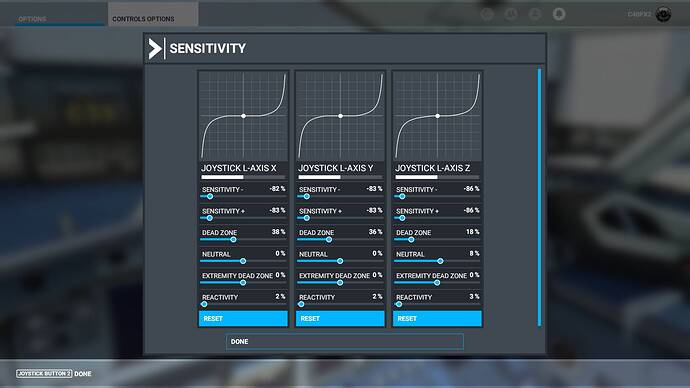 It took me a while before I figured out how to set the T16000 rudders correctly. Try setting this like in the screenshot above and tell me what you think. This makes the rudders much less sensitive and reactivity makes the pedals feel heavier, as it should be.