Then why did MS/Asobo spec them as acceptable? Clouds worked fine when game came out on all settings and through the first 4 patches. Some time during that period the head of Asobo stated that porting to the Xbox would help users with lower specced systems. (I heard it and Windows Central confirms it.)
Clouds and visibility are an integral part of making the software a simulator. I have read many posts saying the clouds are worse and I can’t recall any saying they are better. All that users of this thread are asking is to make the clouds work as they previously had. Put in a setting for the legacy cards that they specced.
Without knowing which GPU you have that works fine, I fail to see the relevancy of your post. You are not telling us anything we did not already know.
To date MS/Asobo have not revised the specs therefore one can only assume that they are working on some type of resolution.

Confirmed. I have a GeForce GTX 780M…sim worked fine until patch #5. I recorded a video and posted on Youtube for answers.

It does not have to do with VRAM. Integrated Intel GPUs from the same period that need to use shared VRAM are not exhibiting the flickering clouds.

FYI I dropped them a message within the thread I have opened on Zendesk.
Edit: I asked them when the fix is going to be released as it doesn´t seem to be included in the latest #6 patch.

Here´s an update from them

I’d argue that being unable to use weather is a lot more than a cosmetic bug, but it appears that some progress is being made. Thank you for the heads-up. The relevant Wishlist thread should appear in the Feedback Snapshot either this or next week, which should give more visibility to the issue.

Everyone, keep sending Zendesk reports and remember to upvote this thread if you haven’t already!

Microsoft and Asobo dont like to be angrily called out, I see. Too bad…

Did they just throw this issue under the rug? 224 votes but not a mention in the latest development update. 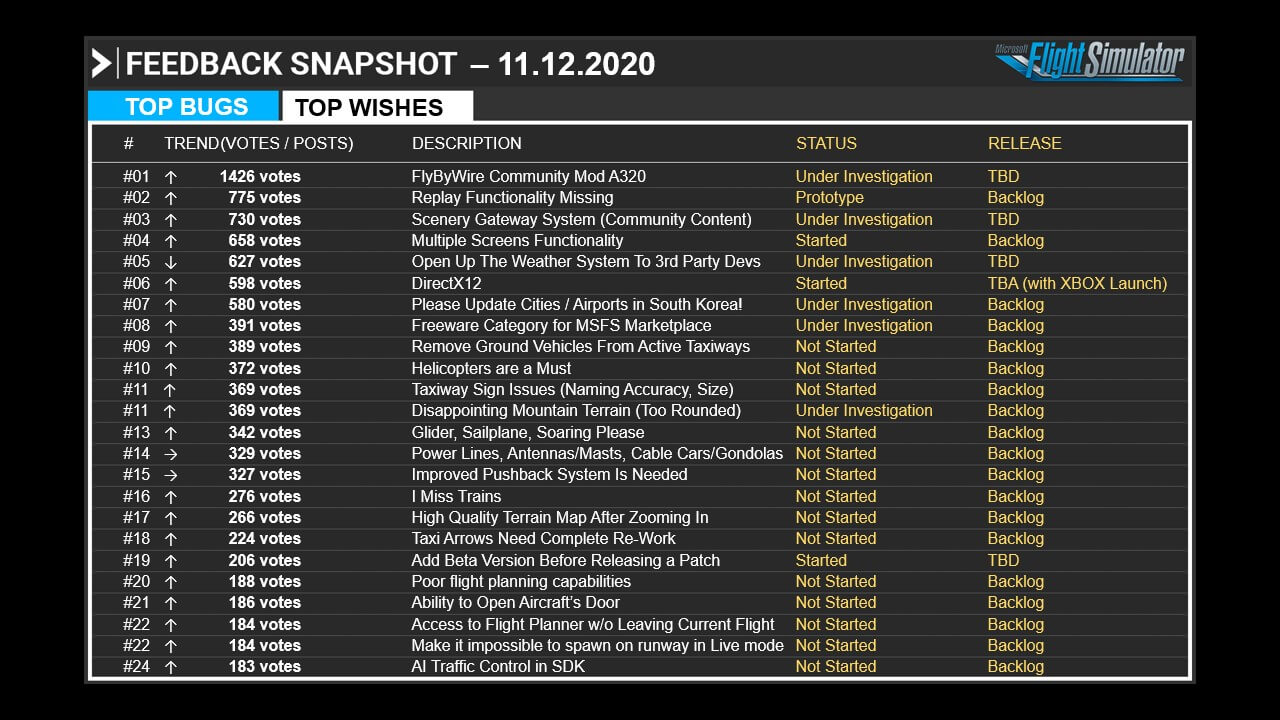 And the developer of the year prize goes to… asobo!!!
After figuring out how to fix bugs the most efficient way>>>>>>>just call it a feature!!!
How ingenius

So what does it have to do with then? because this is bound to happen on old cards that are below the requirements.Least people can do is upgrade to a modern GPU.
Not something I see as priority on Asobo’s end since its only happen on certain cards!

I had a 750ti and had graphical issues similar to what was mentioned here! now have an rtx20x series and my issues are gone!.The issues are clearly happening on these old cards.Why on earth would Asobo fix something that’s happening on GPUs that are below system requirements?
Did you see FaddishSauce657 Zendesk message from Zendesk.
I am not surprised this didn’t even made to the feedback snapshot! Is my post irrelevant now? Upgrade your GPU.

Very simple - these cards are NOT below the published current requirements.
People, including myself, would NOT have purchased this sim if we did not meet the requirements.

No! Even though I could upgrade I fail to see y my 3 year old notebook is obsolete when in fact it works very well.

The main issue is that Asobo is still announcing these cards as compatible. Heck, they can’t even provide us with a proper explanation. And therefore any consumer would think they are being supported when they are not. Even if they run on low settings things shouldn’t be flickering on the screen. Or worse, working properly on even inferior devices

In my country this is understood as false advertisement and it’s actually illegal. As a customer I think I deserve more respect or simply the truth.

I have new notebook with rtx2060 and this problem doesn’t exist.
But now is new problem with inactive challenge window.

Why on earth would Asobo fix something that’s happening on GPUs that are below system requirements?

As SimAirFlyer replied to you, many of us asking for a fix on the flickering clouds issue own graphics cards which are NOT below system requirements.

I just purchased a 2070 so will most likely not be affected by the issue anymore soon.
But I do watch this thread and how Asobo treats this issue very closely.
I want to know who I am dealing with.

Often actions speak louder than words, so if this is swept under the carpet - It sends a very loud and clear signal on how Asobo sees its customers.

If they do this now, other problems may be the same even if we buy new computers

It is easy for someone with a bleeding-edge GPU to just tell others “upgrade”, but they don’t realise that if Asobo keep this up, then their own card could become obsolete one day “just so”, without a real explanation and a notice in advance. And then have to waste days of research to find out what is wrong, only to be told to “upgrade”.

Asobo did not handle this in a good way, and even if it doesn’t get this problem fixed, we need to let them know that it’s not alright for an entire range of GPUs to become obsolete from one patch to another because of an undocumented change just two months after release, without a public and definitive statement, and with the minimum requirements not being updated.

And no, the GTX 770, GTX 780, GTX 780 Ti and the GTX Titan Black are not below the minimum requirements. And by extension, it means that the game should work on GPUs with the same or newer architecture even if performance is lower, because there is no change in the feature set.

This exactly. I’m not currently affected, but for how long. These cards that are affected worked just fine before update#5. Asobo broke it then said “oh, your card is outdated so live with it” even though it meet their specs and worked prior to the patch. How long before Asobo decides the 10 series cards are outdated? The 20 series? Now you see the problem???

I feel cheated.
The minimum requirements are GTX 770 4gb.
It outperforms 1050 in tests. All other games work.
And MFS2020 worked before. Everything suited me.
Now I have to pay money by buying new equipment.
But I won’t do it because of one game.
I love aviation. I liked the MFS2020 simulator. But I have no choice but to drop the MFS2020.
I can’t use it.