Please tag your post with #pc and/or #xbox.
pc
Are you on Steam or Microsoft Store version?
ms store
Are you using Developer Mode or made changes in it?
no
Brief description of the issue:
This bug is related to the 787 and 747 from Asobo. The spoilers arm when the handle is in the unarmed position, and are unarmed in the armed position. The functionality of the spoiler handle is thus reversed.

Detail steps to reproduce the issue encountered:
Do what I told you.

PC specs and/or peripheral set up of relevant:
not relevant.

That’s a new one!
Which aircraft has this issue?
I don’t see that in any that I’ve flown.

Missed that part, duh!
I fly the 787 very often and don’t have any issue.
Moving the lever forward to the armed line the speedbrakes retract, full aft they extend.
To arm them move it full forward past the armed line.
Is this what you are seeing?

FULLY forward is indeed and is supposed to be “armed”.
Stowed (or retracted) is a little to the rear of that, by the white line.
I guess that didn’t come out clearly in my earlier post.

Fully forward is stowed, a little down is the detent to arm them. Same with all Boeings. 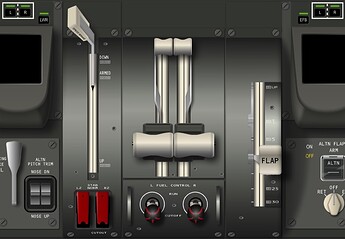 (Hard to talk - or type - with foot in mouth).
I’m so used to using these MSFS ones, I had forgotten and didn’t realize it was backwards.
Please hurry PMDG!
Thanks for setting me straight, much appreciated

I just did a flight with the 787 and had the speed break set to armed (a little down) and the spoilers didn’t come up after landing. I was about to ask what I did wrong, but then found this bug report.