Okay so this is likely a common issue for quite a few I am assuming but flight sim does not seem to be utilising any of the available resources.

I am not expecting amazing results as my spec is medium but changing the graphical settings from low to High renders roughly the same results. 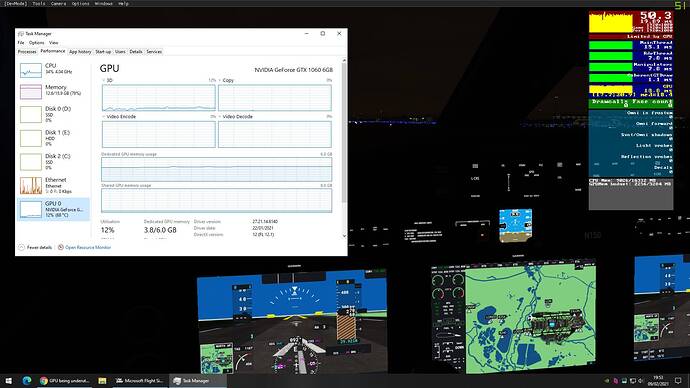 I don’t think it’s not utilising it if you have 50 FPS with a 1060, that’s pretty good for your system

It’s just task manager doesn’t show correct usage is same for me task manager shows around 47% but other programs all say 98-99%.

I could just be asking for too much, just feels like its being throttled. The Alpha version was chugging the hardware way more, the fans on my graphics card used to be working hard now the temp hardly moves and they never kick in.

That screen shot btw is with every graphical setting at its absolute lowest, I wanted to see if it was a particular setting that was holding it back. But from low graphics to high seems to not do much to my frame rate.

Of course the 787 destroys it and frames drop to 20 ish which is to be expected.

This isn’t a winge either, loving the sim just was unsure if anyone else was experiencing similar.

Don’t use the Windows task manager to measure GPU usage. It often reports way off the mark.

i am running Ultra settings with a 3090 OC and windows task manager reports 1% usage.

This is because MSFS does not report GFC usage to the Task Manager. But Afterbuer etc will give you the correct usage.

Someone else noticed they had cpu virtualization enabled and disabling this in BIOS increased fps, lowered frame times, increased GPU and CPU usage.

if you want to keep task manager for measurements, switch the “3D” (under the “GPU”) to “graphics_1” and you’ll see the difference

Clicking the drop down on 3D there is no options for grapics_1 for me.
It’s all good anyway prefer using afterburner as task manager add’s to the load.

the fans on my graphics card used to be working hard

I noticed this too… the load on my GPU seems to have dropped; fan speeds sure have. Frame rates are at a solid 50-60.