Hi. I am looking at getting a new GPU and probably more memory to improve my VR performance in Microsoft Flight Simulator 2020. Right now I have these specs:

I am aiming to get a GTX 3080 and probably up the Ram to 32 GB. With only those two upgrades what would the performance be like? Would frame rates be great? Would I be able to up most graphic settings to Ultra or High without sacrificing performance? I could also wait to get the 3080 Ti when it comes out, should I wait 'till then or would the 3080 be good enough? Would upgrading the Ram make any difference? Thanks in advance.

Your system is 4 Generations old it may not get all the performance out of a RTX 3080.

I would try just upgrade the RAM to 32GB and see how it performs.

If you go to the first site when you google ‘flight simulator benchmark’
It should be for tomshardware with benchmarks from low, medium and ultra settings.

Looking at your graphics card and guessing the 3080 is at the top of the list I would say your are at least going to get double the FPS on ultra settings.

Also, knowing that Average G3D Mark ratings for the 3080 are about 24k and the 1070ti are about 14k it would be safe to assume you would almost get double the performance out of the upgrade.

Haha, FYI you better order that card now! Everything seems backordered or out of stock…

I’m running an Intel i7 8700K, GeForce GTX 1070 Ti , and upgraded to 32GB RAM using the G2. I am happy with my VR performance so far and have most settings on medium or high and a few on ultra. This is the first time I have used VR so possibly I am happy because I don’t know how much better it could be on a top of the line rig??? There is a little stutter sometimes when I quickly look out the side windows but it does not bother me like some others have said (i.e. makes them sick). I would try updating your RAM first (fairly inexpensive) and see how that helps. Then decide on upgrading your GPU. Based on availability it seems like it may be a while until they become available at a reasonable price. If you do decide to upgrade your GPU and are lucky enough to find one, please post your results. Since we have similar rigs I would like to know how you make out. My plan is to wait for the 3080 Ti, read or watch a few reviews, then make the decision on GPU and possibly CPU upgrade.

I have the same CPU as you do but the little brother of your Gpu (1060). I’d start wit upgrading your RAM. This won’t increase significantly but make the sim more stable and probably less stuttery.
I’d aim for a 3060ti because with the 3080 you’ll end up with a CPU that will become the bottleneck. So unless your also planning to upgrade your CPU that’s my advice.

Like mentioned by others there are numerous websites to test Fs and display recommendations. Your current setup looks something like this: 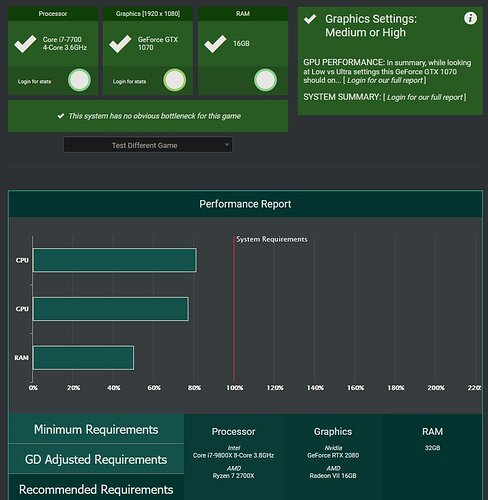 My memory came in, I installed and performance was a tad bid better, but I still would like to upgrade to a 3080. Yes my processor may bottleneck it but I can still upgrade it later for full GPU performance. I would like to know if anyone knows what performance is like with it. I am aiming for a good frame rate with high to ultra graphic settings, try not to have the render scaling at a low level. Realism is what I like, maybe with shading, shadows, etc. and while flying an airliner such as a Boeing because I know the performance is different for each plane. A 3080 is fine for now when I can get one, maybe a 3080 ti later.

By getting a new processor is it easy to install on your own? It would be great not to bring my computer in to a place to have it installed.

Good to hear you’ve upgraded your RAM. With the test I posted earlier you can test the results for yourself.

You could test your current settings here. Of course there are other sites but at least you can get some reference between your current hardware differences.

Reading your wishes I’m assuming you’re aiming to to run FS at 4k. If you search for test results of FS on Youtube you’ll probably see that the Sim is limited in Fps due to the complex programming and enormous amount of data which is processed. Personally I’m aiming for a RTX 3060ti (simply because I’m planning to run it at 1440p). In your case a 3080 (non TI) will do the job at 4k. Of course fed by a beast of a CPU.

By getting a new processor is it easy to install on your own? It would be great not to bring my computer in to a place to have it installed.

This is the tricky part. When you install a new CPU and MB you probably have to install your Apps from scratch. This is the problem I’m also facing but there seem to be workarounds, so I’ll first dig into these.

Reading your wishes I’m assuming you’re aiming to to run FS at 4k. If you search for test results of FS on Youtube you’ll probably see that the Sim is limited in Fps due to the complex programming and enormous amount of data which is processed. Personally I’m aiming for a RTX 3060ti (simply because I’m planning to run it at 1440p). In your case a 3080 (non TI) will do the job at 4k. Of course fed by a beast of a CPU.

I’m planning on running this in VR, not regular desktop mode.

This is the tricky part. When you install a new CPU and MB you probably have to install your Apps from scratch. This is the problem I’m also facing but there seem to be workarounds, so I’ll first dig into these.

I would have to get a new motherboard as well? I’ve seen individual processors sold on Amazon. I thought you can just add them to the existing board. This is more complicated than I thought.

UPDATE: Yes I will have to get a new motherboard. Due to the complexity of all this and the expense I may just stick with all that I have and only upgrade the GPU. What is the highest GPU I can get for VR FS without a bottleneck? My hardware currently stands at:

We’re more or less on the same road here. The I7-7700 suggests you also have an 1151 socket. If I’m correct there are CPU upgrades available but this means you’ll be at the end of upgrade-steps (if you know what I mean).

Theoretically you can use every GPU you want as long as you have a Psu (power-supply) that can feed it. Last week I bought a new Case (Fractal Vector) and a 750W Psu. Just to be future proof. I’m counting on the release (and availability) of the Gpu 30 series at the end of February (March). So that’s my second investment. Later this year I’ll upgrade my MB and CPU.

In your case I’d pay attention to the Gpu performance in relation to your current Cpu. Your Cpu will probably get sucked dry when you match it with a 3080, which will result in bottlenecking it. If I were you I would aim for a 3070 ti. This card should be capable of handling VR and your Cpu should be able to keep up with it.
I’m not using VR so if you need more info on that subject there will be other members that can give you better advice.

Thank you for your feedback. I started a new thread on these forums and help there told me that I can still get a hi-end card and bottleneck the CPU if I intend on upgrading the CPU at a later date. I was being suggested at getting a 3080 or above. He has the 3090 FE and an 8700k overclocked to 5.2ghz. He plans on upgrading the CPU at a later date too. I’m not sure if I should take his advice, what do you think? It would be great to upgrade my GPU to a 3080, to future proof, instead of getting something lower. What kind of harm, if any, does bottlenecking do?

I don’t know how much impact VR has on a system. Reading through the topics here there seem to be some “startup” problems with VR, but I’m sure they will be solved in the near future.
As you’re planning to use VR I’d consider a future-proof GPU like you already said. But keep in mind FS is a complex program and can’t be compared with other Games. I’m mentioning this because you may get ‘wrong results’ when you watch the 3080 perform on YT game video’s or benchmarks.

I think you’ll have to recon with the limitation of your CPU when you buy a 3080. Meaning, you’ll have to hold back your GPU because it wants to go at light speed. And that’s where disciplined tweaking will be needed.

I"m not sure what the result will be when you “just” limit FS to the max of your current CPU (I7-7700). You can try to find YT video’s of simmers who run there FS on unbalanced hardware (I7-7700k and a 3090) for example. I’ll keep an eye on this post, and if you have any questions I’ll be happy to advice you if I can. At the end I’m also aiming for the best upgrade for my FS goals.