Hi all. I’m wondering about my options to build out my cockpit for Msfs at the moment.
My original plan was for triple screens. I had hoped that triple screen support would be available but obviously not. I then started thinking about VR.

I have never tried VR. My biggest concern right now is peripheral vision so I thought I’d ask for opinions. The best way I can describe it is by example.

My recent history has seen me doing quite a lot of sim racing. I didn’t go down the VR route because, to look in my mirrors, I knew I would have to turn my head as opposed to just moving my eyes to see who was coming up behind. That meant that it was unrealistic. I hope that makes sense. In other words the fov meant I had to make unrealistic movements.

The draw of triple screens for msfs is having that peripheral vision. Does VR in msfs have a similar drawback?

In sim racing peripheral vision is critical for the sense of speed and to see your opponents. When flying it is not so important as you have mostly empty air in your peripheral vision. The 3D cockpit and the ability to look at any direction especially when flying VFR (judging the turn to base by looking back at the runway) adds a lot to the immersion. However the scenery visual quality is much lower due to limitations of headset optics and the need to go down with the quality sliders, which is required to keep high resolution and decent FPS (above 30 if flying calmly) necessary for acceptable VR sensation.

Thanks for that.
Yes, that makes sense - regarding the lack of a need to have peripheral vision. I guess it will just come down to me needing to try it.

The graphics side of things makes me even more wary. I’m getting an RTX3090 and I thought that would be invisible for triple screens. Having researched it, it seems that its good but not invincible for triples and VR. What a hungry game!

I think I have managed to convince a friend to bring his quest 2 around. I may try that to see if the lack of peripheral vision is something that I’m going to focus on. The idea of flying while the sun comes up at my 3 o’clock (that I see out of the corner of my eye) is exciting.

Real life SEP pilot, I built a C172 home cockpit in X-plane initially. For this, I also bought a ultra short focal beamer…
One year ago, I tried VR and since then, I never used any flat screen (even wide one) for simulation.
VR is literally another dimension because you don’t see a landscape, you are literally inside an aircraft.
The grass in VR in FS2020, the asphalt grain… you need to see it to understand.

Now, regarding peripheral vision, it is extremely important in flight simulation as well… In the Cessna, you exactly use that type of Vision to perfect the flare at landing.

The only VR headset which provides enough Field of View for peripheral vision are the Pimax.

I never had any headset before and my first one was the 5K+… it is amazing.

Forget what people say about resolution on the G2… the most important in a simulation is to trick your brain, and feeling inside an aircraft.

If I have to choose between a good resolution in a 110 degrees Field of View in VR (which is like looking through a tunnel) or a 170 field of view in a lower resolution, I go with the second option clearly… 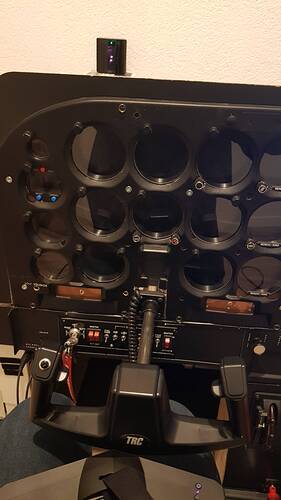 "I never had any headset before and my first one was the 5K+… it is amazing.

Forget what people say about resolution on the G2… the most important in a simulation is to trick your brain, and feeling inside an aircraft.

If I have to choose between a good resolution in a 110 degrees Field of View in VR (which is like looking through a tunnel) or a 170 field of view in a lower resolution, I go with the second option clearly…I never had any headset before and my first one was the 5K+… it is amazing."

Too me it sounds you never tried other options. How can you judge? Immersion has also to do with pixel density and visual clarity.

Correct, I didn’t… but a friend bought a Pimax 5K+ following my recommendations and last week, he ordered a G2 from Amazon…
He is a processional photograph with a full home cockpit with 4K Tv’s…
So, he has high standards when it is about visual…

So yes, the G2 is amazing graphically but after a Pimax, for him it was clear thar it is impossible to use a narrow field of view. His G2 is now in a box and he will send it back.

I understand his point totally.
Before I purchased my headset, I never thought I will buy VR. I judged it too “geeky”, and use only flight simulation

So i started watching a lot of videos comparing or explaining about the different headsets, until I found the one which convinced me to buy the 5K+.
And clearly, no regrets

My comments were basically not to influence you on buying a Pimax but giving you my personal feedbacks based on your question regarding peripheral view.

Yes, it has an importance (especially in GA)
Yes, the only VR headset with a peripheral view are the ones with a large FOV (and there is only a single brand who manufacture them for gamers)

This is really interesting background. I will admit I knew nothing about the Pixmax until now. I’ve just been reading reviews of the 5K. It does sound like it provides what I really want (peripheral vision) but, as mentioned, it comes at a cost.

Right, let’s see what it looks like on a Quest 2. I know that’s not up there, graphically, with the G2 but at least it will give me a fee for it.

My son has a Quest2 to and I a Pimax 8K+. Try with your friends Quest to see how it is in VR and if you like it at all. And try a racing sim too. AMS2 is amazing for that. With the Pimax, you have the wider FOV and a better image clarity than the Quest. Not as much clarity as a G2 though. But the G2 has roughly the FOV of the quest. I for myself trade happily a lesser (not bad) image quality with a wider FOV.