Persistent cracks in ground tiles (not water) … since SU5

Considering all the things FS does, whenever i spot stuff like this im like hmmm ok, and then i forget about it.
Guess its good to let them know but for me thats just like finding a tree in Skyrim thats floating 2" above the ground.

I would not agree … and if I were Asobo … I would care, and here is why:

Whatever Asobo learns and develops in/for MSFS might (should) serve as a generic world game engine for many other games to come. A rock solid high quality high performance “world scale” game engine is hard … but a truly valuable asset. I was truly impressed with MSFS when it came to CTD issues (prior to SU5). The only crashes I suffered have been the early “Xbox controller going to sleep” crashes. Besides that … rock solid. I any game developer should value such qualities of the base game engine. Problems in those parts do multiply.

And even the “single floating tree” which you mention should be a “concern” to Asobo. Not because that tree particular tree looks ugly … but because it is an indicator that some part of the game engine(s design) is “buggy” or not fit for the job (yet). Just in theory … say trees are placed in “absolute 3D positions” in the world, then someone refines the elevation data, and now you get floating trees all over the place

… what if those trees and many other objects would have a “this is where it touches the ground” marker … then the game engine could validate scenery prior to rendering it.

Similar for those tile cracks. There is so much idle CPU core power sitting on those PCs. Validating the alignment of edges is not a compute issue but it could be a pretty tricky issue from the question of the processing pipeline or the coordination of parallel actions.

OK … it is just me … but I would be very interested in debugging an issue like this, because it looks like a signal for something more fundamental.

I was coming in for a bush landing in a “NeoFly” mission, I saw the seam approaching ahead and didn’t think much of it. However when the plane got to it, it bounced off it and landed on it’s nose and my mission failed because I crashed.

I saw these occasionally before SU5, but I see them everywhere now. I even had one in water that caused my little Icon to get stuck! DOH!

Hey im not trying to rain on your diligence, id say bug report these findings, take pictures and send them to Asobo, maybe they care about this stuff in some way i dont understand. Its just that for me considering they offer the Entire Planet Earth to fly around at a level of detail never before seen, i can deal with a few seems or faults here and there

So what your saying is that it seems there are too many seams? … Sorry couldnt resist that line.

These cracks were here before su5, maybe not as often but they were still here. Fly along desert terrain low enough and there be cracks, oceans and lakes, there be cracks…While they seem to be worse in su5 they were there.

The amount seems to dimmish when you would perceive that the servers would be more empty and worse when they are full.

… in a sense it turns out to be a funny coincidence that you mentioned those flying trees.

I went back to EIAB to test the “low res” rendering mode. And the cracks are so “big” and easy to spot, as there is no more 3D grass that would obscure the cracks: 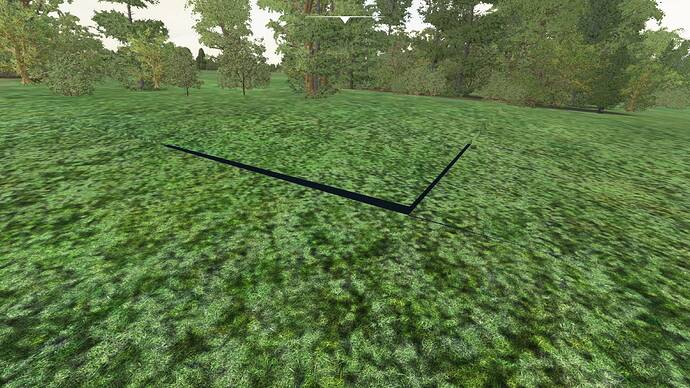 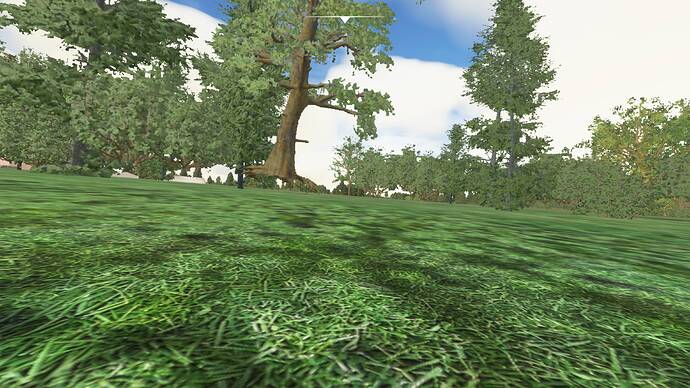 Now I am going a little off topic here, but while I can see good reasons for pulling trees below the surface … 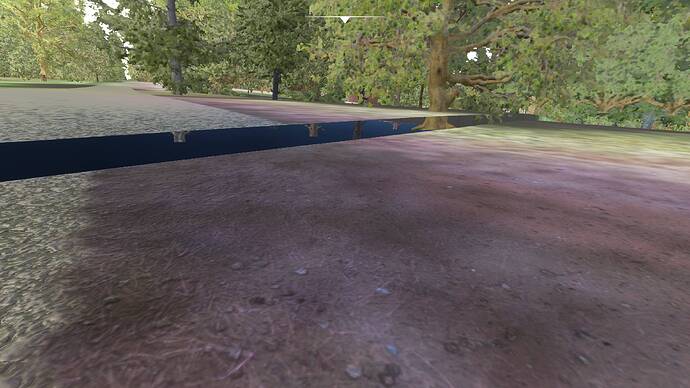 … (in order to reuse one “fake tree” texture to display trees of different height) those “flying” trees seem to be a bug in one or many ways.

Clearly Asobo could not use such a game engine (or scenery post processing pipeline?) for a game like “Star Citizen” … where the action is not restricted to high altitude flying but also includes on the ground walking etc.

So I still think that EIAB is a good testing ground for Asobo’s debugging crew.

I would be really interested if you have some pics of those desert ground cracks.

I did around 70% of all my 600+ hours of flying (sightseeing) above deserts or in mountain regions, because the lack of vegetation exposes magnificent “nature paint jobs” all over the world. I have not seen cracks in the last year.

As I mentioned above the cracks in water (of any kind) have always existed … but have never been a permanent features. They aways “shape shift” for me as I change by position.

In the deserts I could see:

Both are hard to resolve for Asobo as the problem is the precision of the input data. So I would not count them as “bugs” on the Asobo side.

This crack a EIAB is exposing something new IMHO.

I had this the other day when loading into a handcrafted airport (KSEZ) and took screenshots. I also see this even at some payware airports, just not as pronounced. That day though I performed a flight and landed, came back to the same parking spot and it was gone. There are also some quality payware airports that it never occurs and these are generally ones with a lot of handcrafted terrain from what I have experienced. 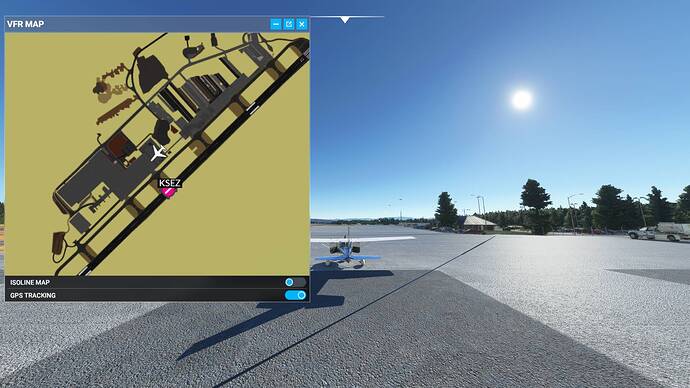 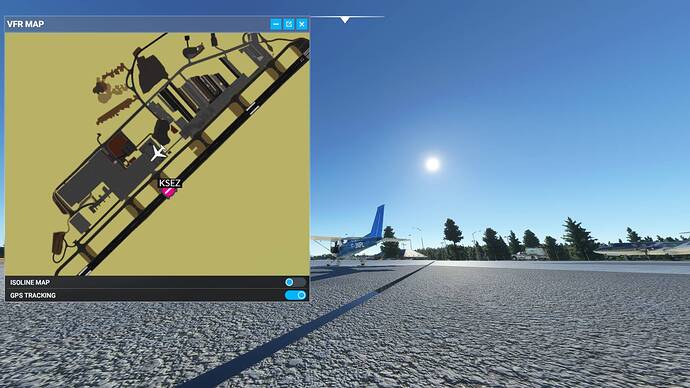 Sorry no crack pic’s at the moment. If you fly out of tribal air in Arizona, and stay low to the ground heading north or south, (20’) you will see them from time to time. At times there are alot and at other times there hardly any. If you climb 800’ they seem to disappear/blend into the scenery.

Next time I see them low level I’ll take a couple of pics, its always been this way but lately it seems to be a bit more. Im gonna venture a guess and say server load since they seem to be more pronounced during ‘prime time’ .

Cracks in the desert North of Tribal Air, installed the new Nvidia driver and they seem to be less but there were still some to be found: 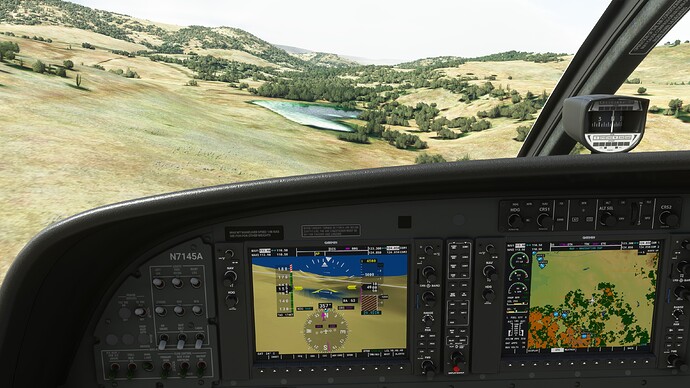 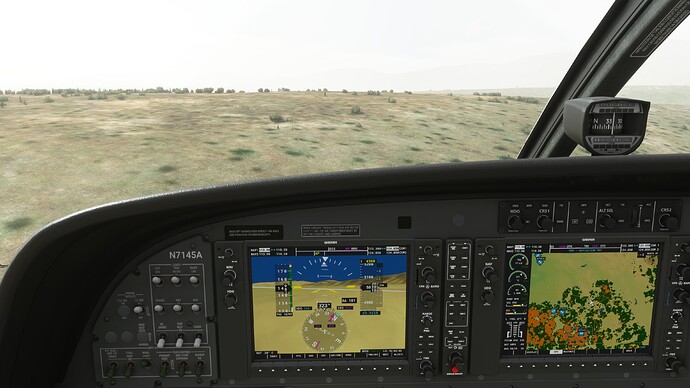 Cracks in the desert North of Tribal Air

… yes, those are really impressive cracks … and they are of the same “persistent” category as those at EIAB. 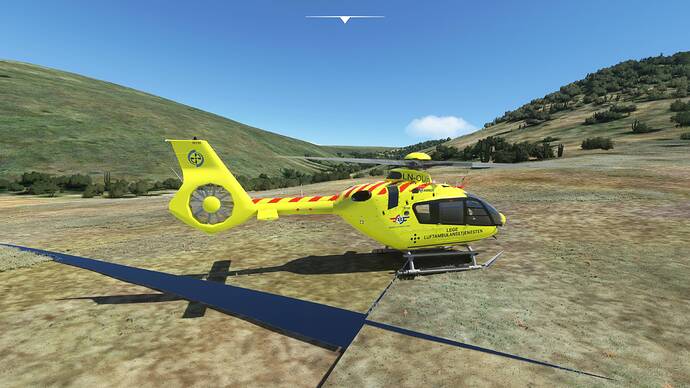 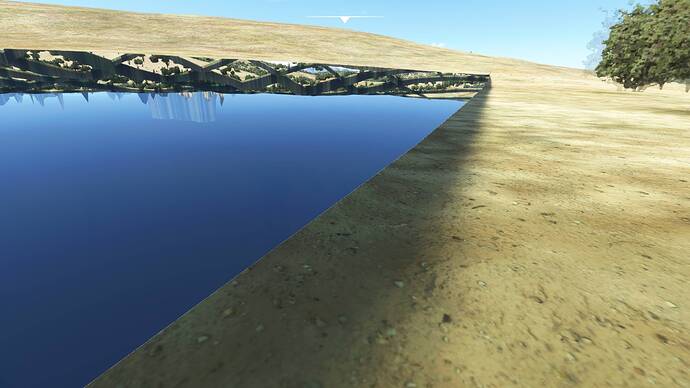 and that crack is reeeaaallly long as well. With lots of neighboring cracks too. Perfect.
However, it is not as easy to locate as the one at EIAB. I tried to make some more screenshots to make it easier to find (that small pond is a good orientation point). 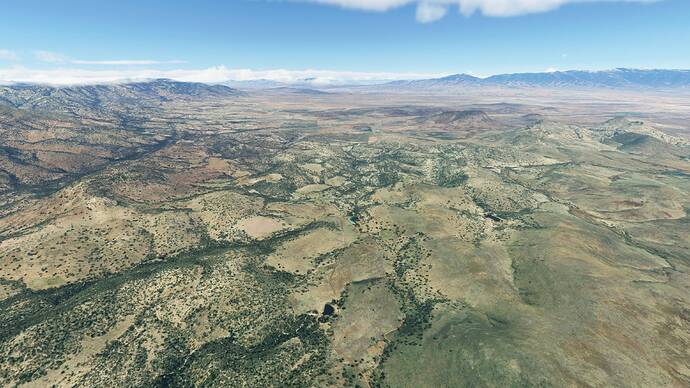 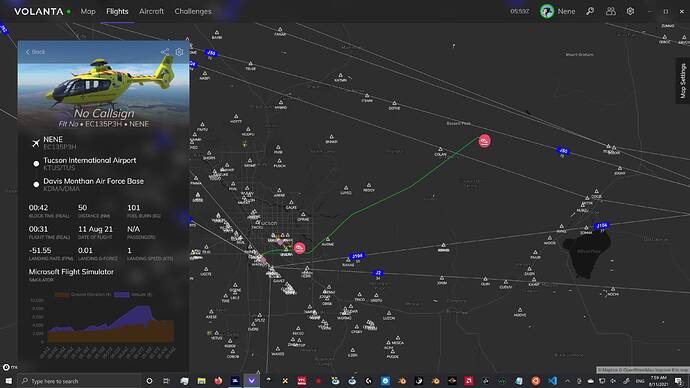 btw. I guess I am just a stupid goose … but even with all those countless glass cockpit nav gadget third party high tech tools … I have no clue how to extra something as trivial as a regular GPS coordinate. So if you want to study those cracks then I can not offer more than that map.

PS: While flying there from KTUS I bumped into some really “nice” shape shift LOD ground tile cracks at the end of the aircraft graveyard. I will put them in a different post … as those crack have not been of the permanent nature.

The new topic is here:

But neither will all the pretty scenery and all the other goodies, might as well go play Xplane or FSX in that case.

I did not test that … but “tile crack” issues even show up in perfectly flat water. So “online”-“offline” does not seem like a plausible cause for me, as it is not about “failing to load the data”. The data is perfectly cached … downloaded … complete … and still it cracks.

You might be right that in offline mode most parts of the world are so “flat” (uniform in slope etc.) that some artifacts might not get triggered. But the underlying bug in the game engine code will still be there.

You have my vote

More persistent cracks spotted in Ireland, this time in the water tiles… 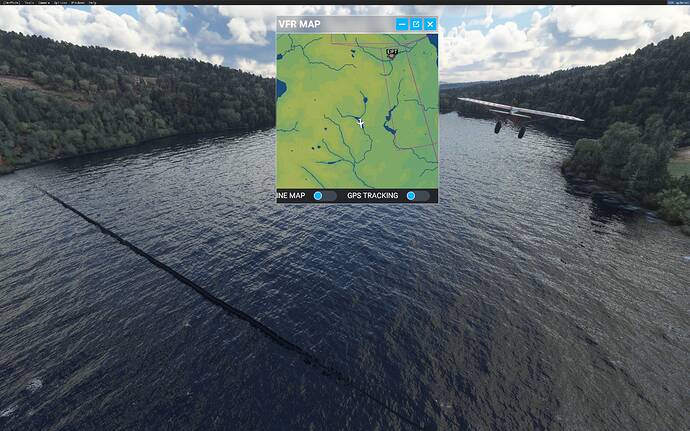 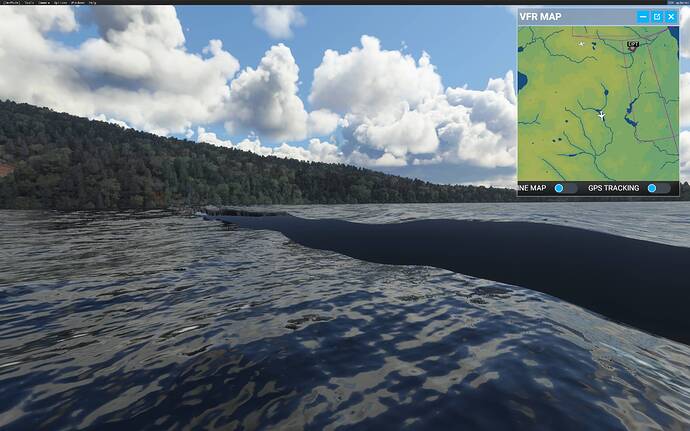 Hey im not trying to rain on your diligence, id say bug report these findings, take pictures and send them to Asobo, maybe they care about this stuff in some way i dont understand. Its just that for me considering they offer the Entire Planet Earth to fly around at a level of detail never before seen, i can deal with a few seems or faults here and there

True, but the seams and cracks weren’t there on anything like the scale they are now. Some of them are ridiculous. I was flying up the side of a mountain yesterday and the crack in the scenery was so huge you could see right though the mountain and see all the scenery on the other side.

Pre SU5 I hardly noticed any scenery cracks. Now i see multiple every flight. It wasn’t like it previously so why should we put up with it now? I’m not expecting perfection in any way, but it’s got very noticeably worse. since the update.

More persistent cracks spotted in Ireland, this time in the water tiles…

That second shot is pretty interesting!

When I look at the shape of the waves I have the feeling that the waves are perfectly aligned across the tiles … but one side has an additional “crack” offset.

I saw that once in lake erie (the second shot) you could see the water layer, then the sand layer, then the crust of the earth and then just black…But it only happened that bad one time. 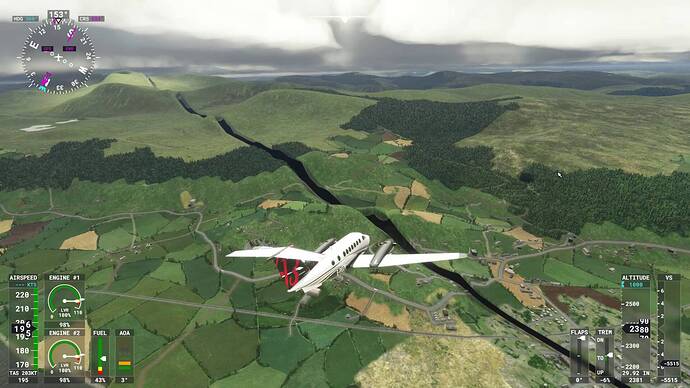 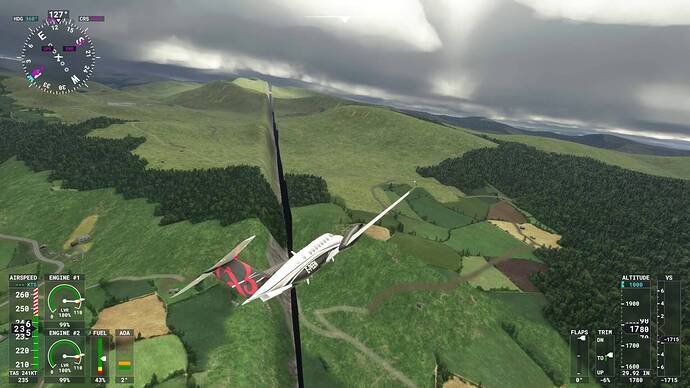 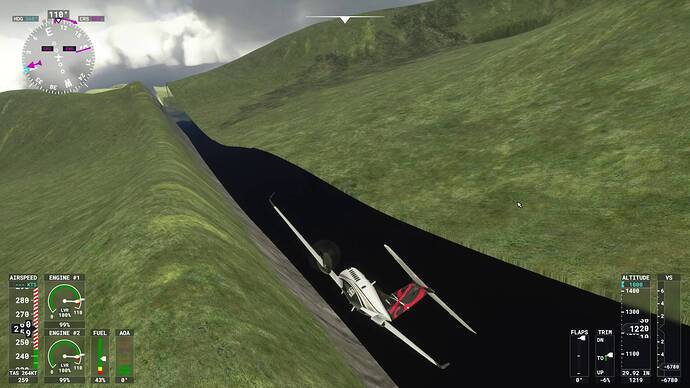 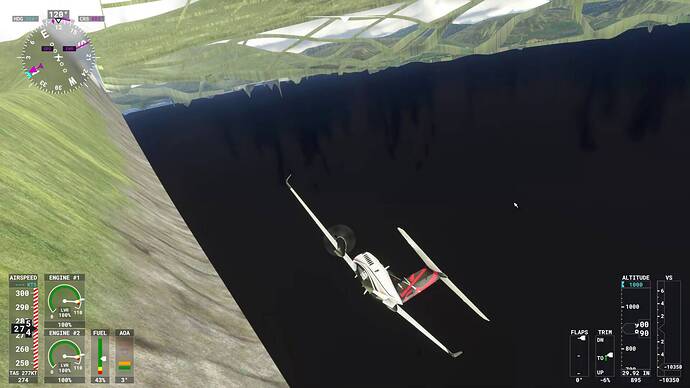