I have seen a brief discussion about this on the PMDG forums but not much else so I thought I would see if I could get anyone’s opinion. I’ve been flying the 737 for a few days and have completed a number of successful flights, but starting my engines properly has only worked one or two times. Despite following countless videos and doing it over and over, whenever I turn the switch to GRD and the ignition on, the EGT just shoots up and nothing else happens. I saw a fix to the EGT as resetting it in the maintenance page before flight and that only reduced it instead of fixing my problem. The only way I have found to start my engines is using a key binding, which only works for one of them, and then starting my taxi on one engine which seems to wake the other one up. Does anyone know how I can start the engines properly? Is this a bug? Thanks!

Hi. I have just finished reading the start up procedure, and completed a successful engine start. What drew my attention to your request was when you mentioned :switch to GRD and the ignition on. All l did was switch to GRD right engine, with left engine off, APU running of course. at this stage the engine starts to spool up, after which inject the fuel same procedure for engine 1. The GRD switches off automatically. It is then when both engines are steady at approx 20 +/- % turn switches to continues. What confused me was the word ignition… This procedure works perfectly on my 737. Apart from this l have no further suggestion, and maybe telling you what you already know…Good Luck…

make sure to have packs off

But then don’t forget to turn them on before you really get going otherwise the cabin altitude alarm will start going off on you. (Can I go back to the Airbus yet… it’s so easy

It sounds like you’re trying to start it like a more modern aircraft and experiencing a Hot Start as a result.

On the 737 you start 1 engine at a time. For a normal start you need the APU bleed on, packs off, isolation valve auto and APU running.

Once ready you set the righthand starter to GND. On the bottom MFD look for the N2. Once N2 rotation exceeds 20% introduce the fuel by raising the number 2 fuel cutoff switch to it’s detent. The starter will cutout at 56% N2. Repeat this process for the left engine.

Once the engines are running you do the after-start scan-flow and, amongst other things, you need to bring both generators on-line, both packs to auto and APU bleed off (which you do in a V shape…left pack-APU bleed-right pack). Once you have this all set you can turn the APU off.

I might be wrong here, but perhaps the Aircraft Equipment config is also related to how the engine starts.

I set my aircraft to have AUTO Ignition, then everything that has auto or modern equipment I have it installed including the new fuel cutoff switch models.

So far I have been having successful engine starts as long as I do the following steps:

But then don’t forget to turn them on before you really get going otherwise the cabin altitude alarm will start going off on you. (Can I go back to the Airbus yet… it’s so easy

Got that yesterday, forgot to turn on the Packs again and my passenger just passed out in their seats… Hahaha… at least no more crying babies during the flight (that just got dark all of a sudden)

We need FS2Crew PMDG edition… This is too much workload for a single pilot.

I finally made a procedure which works for me, but still the engines start up without having to switch the “Ignition” button. @Neo4316 I read your comment and checked if I had “Auto Ignition” on, but in either case I don’t seem to need the Ignition switch.

Switch to GRD and Right Ignition and the EGT just spools up gradually until I introduced the fuel and the engine fully starts.

Would this (see image) be the setting to (de)activate the Ignition switch? In that case it isn’t working for me. On or off, the engines start directly after I switch the GRN switch. Or am I doing something wrong? 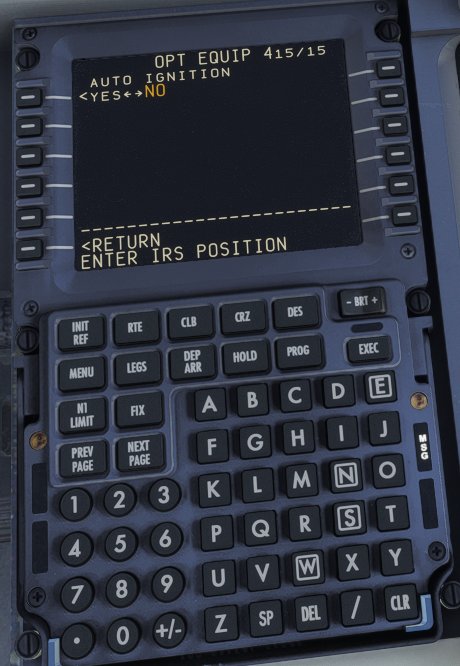 The ignition switch has several settings: GRD = ground start. For ordinary on-ramp pre-flight engine start. OFF = Obviously, no need to run the spark system if the engine is running and stable. CNT = Continuous. Used during takeoff or landing, or flight through precipitation or icing conditions to ensure that temperature and water content transients don’t accidentally stop fuel combustion. And FLT = for air-starting a failed or shut-down engine in flight.

I might be wrong but the Auto-ignition setting in the CDU is about changing whether the default engine switch position is either OFF or AUTO. I think that if you set it to Auto, you don’t need to play around with the switches too often. That you only need to switch to GRD for the ground start, and once the engine is running it will automatically switch back to AUTO position. Then for the entire flight the engine at AUTO position will automatically manage the engines whether it is for takeoff, landing or cruising.

If you set it to not use AUTO ignition, you have to manually switch the engine modes at different stages in the flight to avoid the engines from cutting off.

Thanks, you answered questions I had for a long time but never bothered to look up

. You added some more realism to my future flights.

That makes sense, but I tried both settings (on and off) in the CDU and both settings start the engines without the ‘Ignition switch’. It’s not the most important question in the world, but I was just wondering.
I must say that each time I fly the PMDG 737 I’m starting to have more fun. Manly because I’m not just using the overhead panel as a pinball machine but actually start to understand the function of (a few of) the switches.

I go out and push

Jokes aside, I probable used the wrong term for the switch I"m referring to. I’m talking about the middle “selector”? switch which says “IGN-L / Both and IGN-R”. It’s this switch that doesn’t seem to have a function. I thought the sequence was: Engine-switch to GRD / Select ING R (or left) and then at 22% Flip the fuel switch.

Ah, I see. The plane has two independent ignition systems. I’m sure the FCOM and particular operators have different procedures, but for sim purposes it’s usually fine to just keep that switch on BOTH.

whenever I turn the switch to GRD and the ignition on, the EGT just shoots up and nothing else happens.

This happened every single time I tried to start the engines from cold and dark. N1 was not even spooling up, just EGT rising without introducing fuel or spooling the N2 compressor.
Until I switched off the packs

she was starting flawless afterwards. 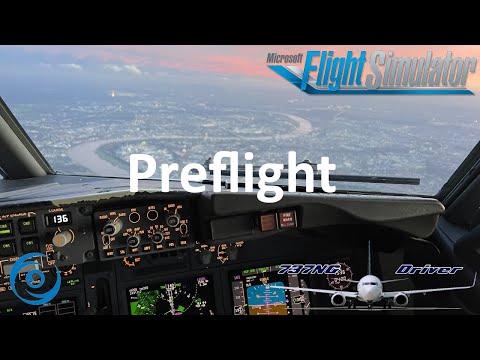 Thanks for the explanation and the YT link.