Sorry to hear of your issues. I really didn’t expect to get such an improvement in dx12. I was shocked actually. Before, dx11 was running pretty good overall. Now it’s dx12 that’s running the best for me. ( for now at least)

I still expect to see a nice uplift once nVidia release the proper driver AND Asobo put the memory optimization code they had in the initial beta back in. That should sort things out. Until then, we wait.

I understand that we should wait the new GPU Driver to confirm any changes.
Below what NVIDIA says about each one (STUDIO x GPU Driver):
“…the SD version is best understood as follows. Basically, it’s a slightly back-rev, more fully tested, and more stable GPU driver that emphasizes reliability and functionality over speed and support for newly introduced gaming-specific features.”
At least from my side I will wait GPU Driver that must be available in next days.

This thing just went light years ahead of everything!!!

Ok, so it’s not just me who is seeing no Nvidia game ready driver released with the MSFS update 10?
I thought I ready that Nvidia was releasing a game ready driver at the same time, which I thought was needed to support some of these update 10 improvements/fixes, etc.
I guess Nvidia is to busy

Understood. That’s what nVidia say. And I understand. I use the studio driver on my laptop for content editing work. I understand what it does and can do.

Please note that our new memory allocator for DX12 on PC will only be activated for Nvidia graphic card users once the next driver is available (will improve performance). Other graphic cards already benefit from the new allocator.

That means the optimization code is NOT active in this version of the driver and won’t be until nVidia release the new Game Ready Driver.

I went back and forth like 4 times between the current Nvidia Driver and the Studio driver and decided to stick with the latest Studio Driver. I don’t have charts to show but I got an additional 10-12 FPS in 2D and about an extra 5 FPS in VR, both tests with Dlss on quality and Reprojection on. One thing I noticed immediately was that I do not have any stuttering at all when panning left and right with the studio drivers. HWinfo showed that my physical RAM used was approximately 35 gigs, including W11, and other soft I have running in the background. That was the most RAM I had used before (I have 64 gigs RAM). It only takes a few minutes to switch between the two drivers, so why not giving it a try. I am using them until the new game drivers are released.

And about people with an AMD GPU? Someone with AMD reading this forum can share your own experience with DX12 now?

Dx12 is running smoothly (approximately same fps with dx11 @25-28fps, seems smoother though) with 517.40 (now) had to use ddu, didn’t initially and everything was sh:÷

I also disabled v-sync (which i had turned on a few updates back to lowering stuttering). That added about 10-12fps ! So now I’m seeing 35-40 fps on the ground, ext view at Ksfo
It is now super smooth for me, I’d say the absolute best performance I’ve seen ever with this sim.

This is based off my initial impressions…more testing to do.

Play with v-sync see if you get any positive results.

I just saw the same 10-12fps increase (by switching off v-sync which used to be necessary for me to minimize stuttering when panning)
Now with 517.40 dx12 by default was smooth as you say and became even smoother after disabling v-sync.

Not really, but it’s fine.

This seems to be an issue with DLSS rather than DX12, as I get this using DX11.

I didn’t gain any more fps. I get actually about 5 fps less than DX11, but it’s way smoother on DX12. Not one single stutter

What VRAM usage are you all getting in DX12? With my 3090 I am pegged right at 7.9gb. Experience is great but curious if people are getting higher and under what circumstances.

Ok. Thanks for the info.

They didn’t say anything about a Game Ready Driver. The Studio Driver is already optimized for this Sim.

What VRAM usage are you all getting in DX12? With my 3090 I am pegged right at 7.9gb. Experience is great but curious if people are getting higher and under what circumstances.

This is a screenshot of my HWinfo after a few short flights: 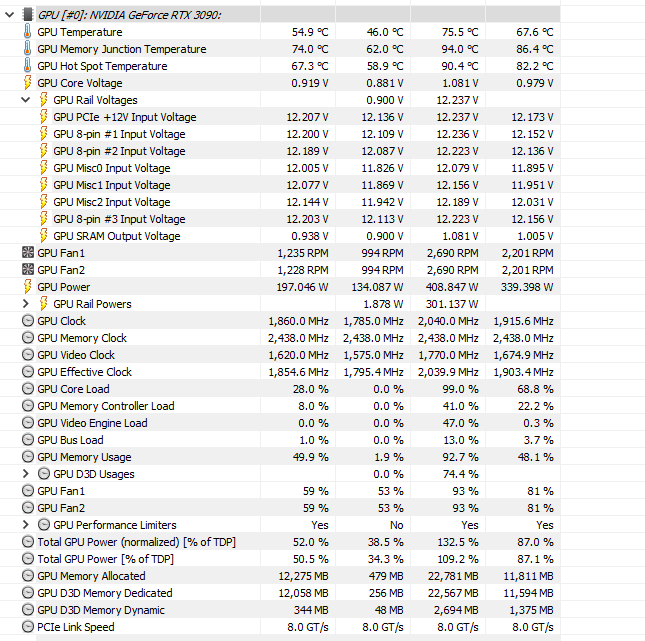 The third column from the left is the max