Quest 2 MUST TRY THESE SETTINGS!

Valid point, however it doesn’t take long to set them back unless you had loads of profiles

Try this on The oculus debug tool, (maybe 0.8, 0.8). This gave me crazy fps on my 2060 max q laptop at 100% scaling (super sharp controls), i wonder how it looks like in a proper gpu and if people notice downsides to this trick

Done that, it limits your view space with black borders.

With these drivers I mentioned, no need for that setting dude

Ohh interesting, i don’t see the vertical black borders at 0.8 with my setup, maybe it’s the same issue and there is some scaling issue with the drivers. Do you see the black borders with any tangent multiplier lower than 1? I’ll try the driver update

I might be wrong but for those of us with the latest RTX 3000 series cards I don’t think we can roll back to that older driver. I’m sure I’ve read that a few places but I’ll need to check for myself.

I don’t think switching from Steam openXR to the Oculus openXR effects the sim much and can muck things up for a few people. I guess it depends on your system but I’m keeping that where it is.

Other than that I’ll give your methods a try. Thanks for posting.

I might be wrong but for those of us with the latest RTX 3000 series cards I don’t think we can roll back to that older driver.

From “My VR Settings” topics:

Thanks I’ll give that a look.

I just tried all these settings including rolling back to that earlier 456.38 driver for my RTX 3080 that CptLucky8 recommends. It all definitely wins me back some FPS and the whole thing is a bit more buttery smooth in cockpit. I great guide, thanks.

Something thats also worth a look are the sittings in the virtual desktop app in the Quest 2 itself, if you’re streaming via wi-fi- from your desktop (highly recommended). There’s a few things there can make a bit of a difference including one for over all colour vibrancy. Thats definitely worth trying. For me it helps get rid of those washed out colours you get in VR, particularly in the landscape, and makes it all a bit more punchy and vibrant like you’re used to on your monitor.

But did u change any settings in the Oculus Debug Tools ?

I have a wild guess than if setting vsync to “fast” do something for your VR headset, that could mean you have vsync enabled on 2D graphical options of MSFS. If I’m right, we talk here about the bug they currently have : the vsync in 2D options limit also fps of your headset E.g. 2D vsync for my monitor at 60Hz limit my Oculus at 60fps whatever I do and that’s explain why GPU seems not use at its full potential sometimes in VR (this is a fact I reproduced and know bug). Setting it as “Fast” allow your machine to not be stopped by the 2D vsync and compute at full speed, hence the raising of fps in your headset.

@CodeLoran69 It might well be something related indeed. However, the VR display is supposed to be in “Direct Mode” which is the application is using the Video Card in a mode where there is no monitor and pure graphics only, which then send it via HDCP for example. In the case of the Q2 using USB or Wifi it might be a limiting factor though because the headset is not directly connected, but on the other hand, I believe they would have coded their Oculus driver in a way which is using Direct Mode too and they are only intercepting the final render buffer (or something similar in Direct Mode).

What I found puzzling though is that when trying Motion Reproj. with WMR OpenXR and the G2, It seemed quite consistent I got smoother fps in changing the NVidia CPL settings:

from these (2D or VR without reproj):
Low Latency ON | Threaded Optim. ON | Vertical Sync FAST

to these (VR with reproj):
Low Latency OFF | Threaded Optim. OFF | Vertical Sync OFF

Every other combination of these 3 settings was not as smooth. I’m attributing this to WMR Reproj. having other requirements with regard to frame timing for it to work and these are helping achieving this.

Having said this, there is still something which makes me wondering: FS2020 is displaying the VR eyes view and this need refreshing and vsync of some sort. I don’t know how much displaying this in a window (borderless or not) is actually having an impact on the VR frame timing. It shouldn’t at all because these are 2 separate rendering paths, but we don’t know either whether FS2020 rendering loop is also 2 separate paths regarding frame/draw sync.

Just followed this and installed the new driver. Specs are i7 7700k and a GTX 1080. Field of view is a lot more clear now. However, I’m getting some stutters, what should in the in game settings look like and should I continue to have the oculus resolution maxed . Cheers

Anyway you can walk me how to connect quest 2 with virtual desktop? Thanks

The in game settings will vary depending on specs. How do have yours set at the moment?

I was thinking the same as your last chapter : their mainloop still wait vsync (so for monitor double view) even when they render in VR, hence the vsync influence. I think this is because their VR implementation seems made on top of the 2D version. I can also see the very moment they start to initialize VR is wrong. If I trigger the proximity sensor of my headset, it start to turn on and off during loading of a flight on monitor, so long before I switch to VR. That’s make me feel they are both tangled in a “dirty” way.

In any case, I didn’t see one person, whatever headset and GPU it have, able to run the sim at the native resolution and Hz of it’s headset, even my low resolution CV1.
On my machine with my GTX1080 the sim can’t render 2 screens 500x500 (Render Scale 30%) at 90fps, which is never seen. When I benchmark I usually see a ratio 2D / VR between 2,5 and 3,5. So you need more or less 2,5 to 3,5 more power to use VR (2 screens with greater FOV plus VR management, 6 axes, etc.).
Let’s say it’s a ratio of 3, this mean, if a 2D game can render on my machine 1920x1080 at more than 60fpsx3=180fps, it will be comfortable to render 90fps 100% render scale at the same settings (or slightly below in quality). This is a ratio I often verified with my VR apps. Here we are very far to reach such ratio…
So my guess is Devs have lot of rooms for improvement. 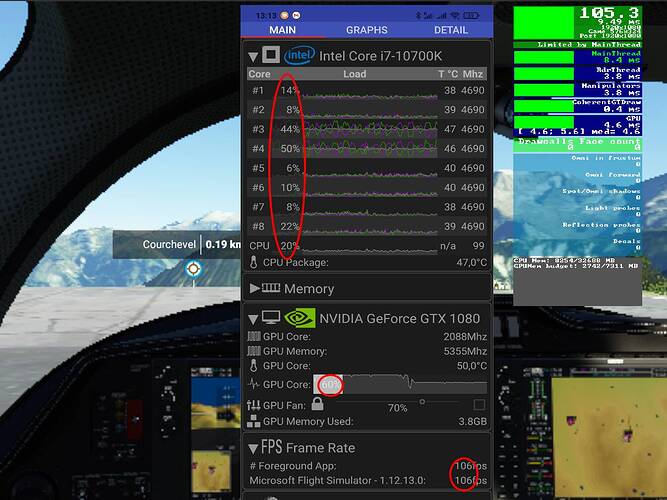 They need to find and release the hand brake they have put somewhere!

Sorry, I’m too much off topic here (but can’t resist to say I reach 546fps at ultra setting in fullHD in another flightsim, vs MSFS 106 at very low settings)

Also try this - it worked for me! 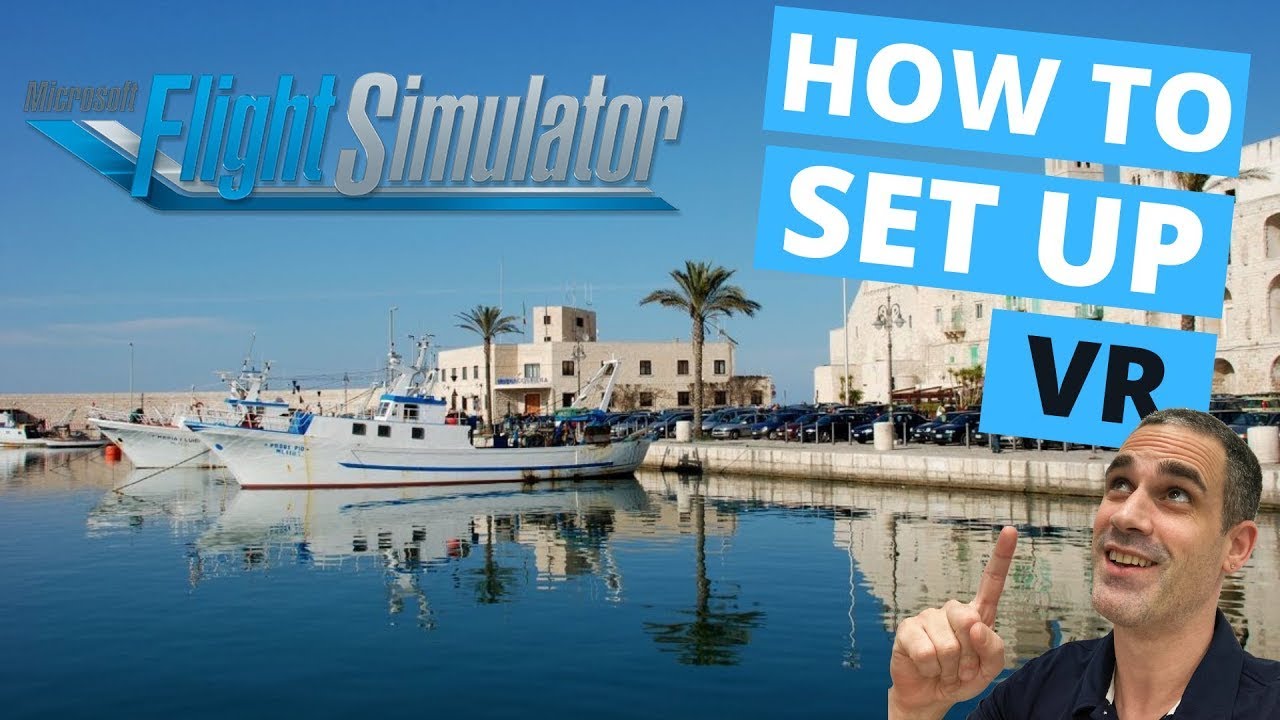 Do you have the Quest set to 90hz in the Oculus app and resolution at the 1.0 default?

I tried the drivers and I’m still setting a much wider scene on the 2d mirror in the pc (peek under the headset to see the screen), which means that I can squeeze more performance by reducing FOV (at the risk of reprojection not being able to catch up with sudden head movements). I wonder what my setup is missing, are you using link or VD?

for my G2 rolling back the drivers brought me about 20% fps so now i am able to get +/- 30fps in most environments at 90% render scaling with TAA, 75 T-LOD and O-Lod and medium/high settings on the rest with 2080ti.

100% render scaling results still in 23-25 fps what is playable but not as smoth as having around 30fps. But the garmins are better at 100% so I hope for some performance optimizations by Asobo soon the reach the 100%/30fps goal on my PC.

Anyway rolling back the drivers is worth to try and I have seen no negative impact so far. Even cyberpunk is still at above 40fps at full-on settings (wide 1440p).

What this tells me is that the VR mode has not been optimized since that old driver came out… that’s so irresponsible to release something of this magnitude without testing it on the latest graphics driver. I won’t be rolling back my drivers for this. I can wait for them to give us the actual VR that works and not this beta version. So much potential yet zero time went into the final version of it prior to release… rushed released as everything else in the gaming industry now days. I bet they rushed because of the holidays to get more people to purchase it.