Question about FPS and GPU

It’s this a bug or something is wrong with MSFS.
I put it in dev mode. I get for example using 6GB of 7.8 GB available…But sometimes the GPU gets super hot and it says using 5 GB of 4 GB available. How can you use more than what you have? First why 4 GB if I have 8. If I consume more than available does not suppose to crash the game? My GPU is getting super hot in VR and no FPS at all. The system works fine about 40 - 50 fps in 2D for high settings with my AMD 5700 GPU.

When you say “super hot” you have to give some values to understand if it’s too hot.

You can use the AMD software to check your temps. You want to look at the “junction” temperature. Around 90-95 is at the high end so you wouldn’t want it to get any hotter than that. If it does you should do something to prevent it. My card is good up to 110 but you don’t want to run it constantly at such a high temperature thus I keep it under 95 max. You’ll have to google for your cards’ max junction temperature.

Note you can also use the AMD software to turn the fan speed up and thus get better cooling. 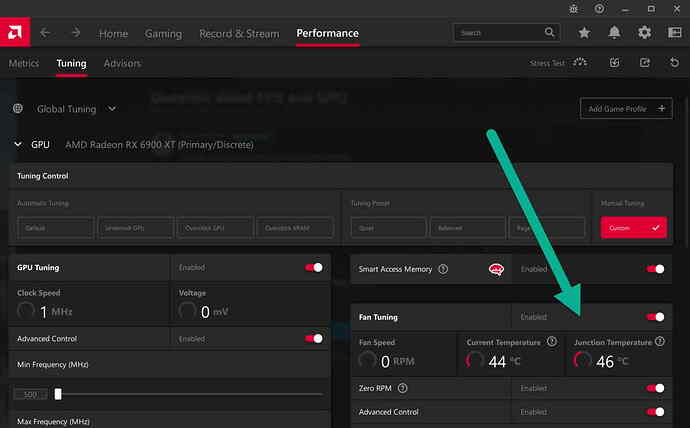 I have a Dell Alienware desktop do you think I can upgrade to RX 6900. I am concerned about the power consumption of the new card. I may have to upgrade that too. But now it is not the right time for video cards they are overpriced. Close to 2000.

I would not push it about 100 anyway. But good to know.

The Alienware’s are hard to upgrade because the chassis size is not standard.

Unfortunately you can’t just go buy a new GPU and place it in as they are usually too long (Dell makes a custom version).

You’d have to measure your chassis or google around and see what you can get that will fit.

You should have no problem upgrading the CPU in the R10 as the motherboard is capable of supporting the new options from AMD. As mentioned, **GPU upgrades are possible as long as the graphics card is under 267mm in length and 118mm in height** , and you have enough power

I guess i have to see what dimensions are the card.

I would not push it about 100 anyway.

I use that to cap my framerate to 30 fps. Normally my card would run above 40 fps in VR if uncapped and the settings I’m using. But I prefer to cap it to 30. The main reason is that it performs better in that it eliminates the stutters. It seems by not running at 100% usage that there’s some headroom which allows the card to deliver the frames more consistently yielding less stutters. And the sim is totally smooth at 30 fps so higher isn’t needed. The secondary benefit is the card runs cooler.

So maybe give that a try before you by a new card. As you mentioned, they’re extremely overpriced right now. I bought my 6900xt in February for about $1800. I had a 2070 super, similar in performance as your 5700xt. Funny because I sold the 2070s and actually got more for it than I paid for it new 2 years previously. The card prices are crazy! But the 6900xt does make a big difference but maybe try other solutions first like capping your framerate.

Thank you I will try that. Otherwise, I will fly in 2D until SU8 fixes some issues with VR.

Radeon chill fixed the problem in VR. I am getting not stutters at all and it works perfectly even at KMIA. I set to min 30 fps. Thank you very much

I cannot fly in 2D anymore I get stress out LOL.