Question regarding "TO / FROM VOR"

Hello All
I have a question in regards to VOR navigation:

So far I was of the opinion that my instruments would show me a “TO course” when I fly TOwards a VOR. And if I fly away, the arrow would show FROM.

But recently I have every now an then the situation that I capture a VOR ahead of me but the signal shows the FROM arrow. I thus have to set the opposite course to go TO this VOR.

Do you know why this is like that? It only happens randomly. Am I doing something wrong? The VOR station is the correct one I track - I checked the identifier etc.

First, please let me tell you I am no expert - I haven’t trained at all (if not by my own means).

There is no such thing as a “TO” radial when we talk about VOR navigation. You have to consider VORs as “emitting devices” - therefore, they will produce those 360 radials from them. Or goal is to intercept the radial.

Here are some links that should be useful for you :

The CDI instrument can tell you two things: if you’re left or right of the selected radial, and if you’re going to or from the VOR station.

To determine which radial you’re on, once you’ve tuned in the proper VOR, center the CDI with a FROM flag. Because remember, these radials emit from the station! Now read the number at the top of the compass rose (under the arrow).
This is the radial you are on.

If you were to fly that heading, it will take you further away from the station. Flying the reciprocal would take you to the station.

If you were to center the CDI with a TO flag, the selected course would tell you which course to fly to go towards the station, but not which radial you’re on.

Well, I do understand the aligning to the radial - my problem is that I am flying TOWARDS a VOR station and would therefore expect to see the arrow showing “TO” (pointing in the direction of my flight path), but sometimes it shows a FROM-arrow - even though I am clearly flying TO this station

It depends on the radial you got dialled in. Above links will help a lot i recon. 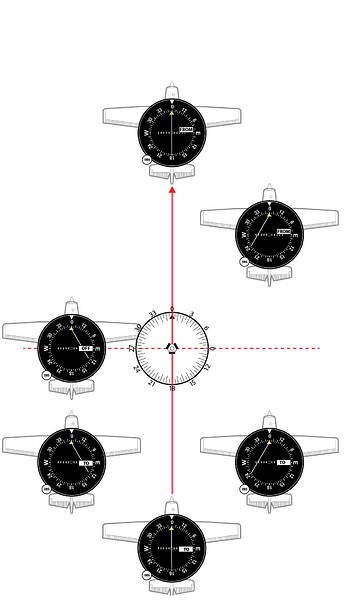 The VOR sends it signal in the round, but is in a fixed position on itself. Therefor the radials will be the same no matter where you are relative to the VOR. Every radial given is FROM the VOR. 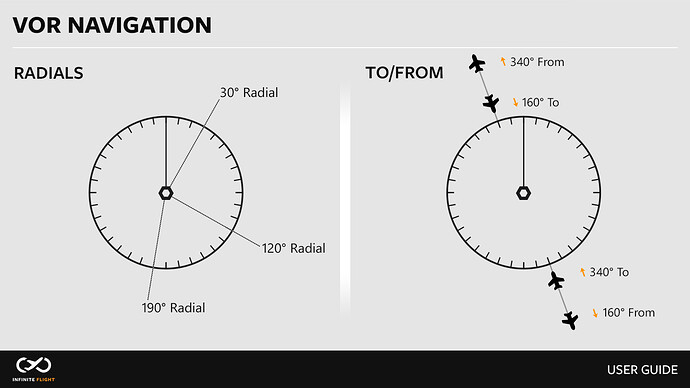 In the most simple situation, you start off TO a VOR on a certain radial. Once you pass it, you are going FROM that radial. If you turn the CDI 180°, you would start off FROM a radial, pass it, and continue TO a radial.

So it doesn’t matter if you are flying towards or from a VOR which flag you see, it matters what radial you’re tracking

Yes - I think this is what I always tought. Simply put: if the nose of your plane points TO the VOR (regardless from which direction you arrive, you would expect a TO arrow no? And whenever you are flying AWAY (tail towards VOR) you will always see a FROM arrow right? regardless of the radial? At least this is what I read out of the picture above no?

Could you provide with your location, VOR frequencies and heading? Also (just to eliminate variables), the type of aircraft you use. If I can have it (I’m limited on Xbox), I’ll reproduce the environment.

I have never experienced "reverse flags myself.

Not necessarily. Taking this one as example (don’t mind my drawing skills) 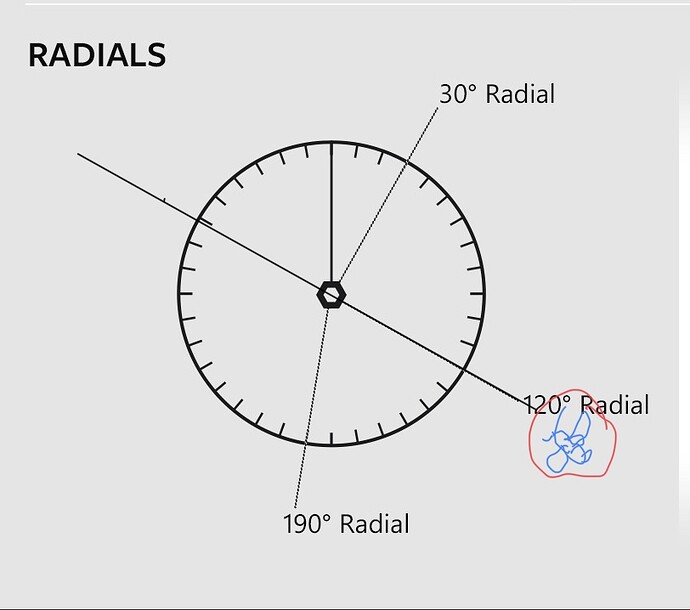 We start in the right bottom. We want to track the 120 radial. If we put the cdi on 120, we will begin FROM the radial, pass the VOR and fly TO the radial. That is because we start in the radial 120° relative to the VOR.

When we put the cdi on 300 (180° difference; the reciprocal) we will start off TO the VOR (because we are on the end of the radial going towards the VOR, in relation to the VOR), pass it and continue FROM the VOR on the 120° radial.

Ahh! Now I get it! Thanks - that makes sense

Yea, it does matter from which direction I am approaching the VOR - so now I understand!

thanks for your help!
best
Merlin

Do you know why this is like that? It only happens randomly. Am I doing something wrong? The VOR station is the correct one I track - I checked the identifier etc.

Was this when flying the new Aerosoft “Twin Otter” ??

The Omni Bearing Selector (knob and dial), Course Deviation Indicator (needle) and ambiguity flag (TO/FROM) don’t tell you whether you are going to or from the station. They tell you whether the course you have selected goes to or from the station. So if you are south of the station, travelling north and have 180 dialed on the OBS, the flag shows FROM even though you are travelling towards the station. Hint, your OBS setting and heading should always roughly agree (plus or minus wind correction and intercept angle)

Love the aircraft you’ve drawn, when is it coming to the market place

I submitted it yesterday. So I would expect somewhere next year!

That is indeed your problem!

Think of it this way. You are flying north-bound, on a heading of 360. The VOR is directly south of you, 180 degrees from your present location (directly behind you). If you turn the needle on your VOR indicator to S (or 180), it will indicate a TO flag, regardless of the fact that are flying away from the VOR. What it is telling you is that to fly TO the VOR, you have to fly a heading of 180 degrees. Which means: turn around!

Allow me to insist on you watching the videos I submitted. They are of good value.

Yes, but it is not related to this aircraft. The problem was “me” here ^^
Got it now!

Thank you everybody for contributing! The problem was located front seat left (as usual) ^^
best of wishes
Merlin