Hi all. I am building a home cockpit of Baron G58. I am having difficulty finding the real dimensions of the center pedestal. Is there a way to find this information from the baron model? 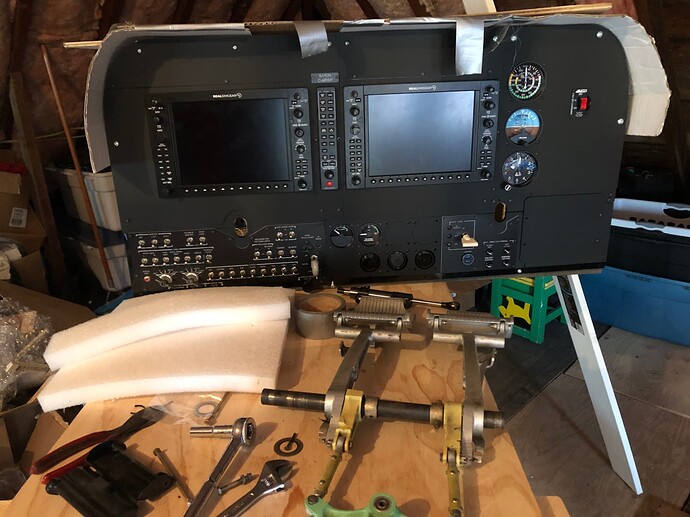 Do not know where you can find that information. Perhaps scale it from photographs or even from the sim?

I would say that if you have some air-show exhibition or events near you you might be able to see if you can find a Baron G58 and bring your measuring tape with you and take some photos and measurements.

Want to give this a bump. I was wondering if the sim’s cockpit models can be exported to a file format so the precise dimensions could be determined. This would be of great help particularly for VR cockpits to be able to position switches and knobs in their precise location for each aircraft in the game. I know there’s the crude “analog” export method of holding controllers or hands (leap motion) at components in VR and having someone measure them in the RW, but we really need something better. I would even stand for a virtual tape measure to get accurate dimensions.

I’ve noticed if you export the sim’s models in blender then the dimentions aren’t accurate.

How did you export the models?

I’m not very fluent in blender (been using sketchup pro for a while now) but if you have a single known dimension (preferable a long dimension), you can rescale the entire model in sketchup. I would hope you can do the same in blender. Then you could get accurate dimensions for everything else. In sketchup you could generate 2d plans from which to make templates for laser cutting and etching, or make individual 3D component models from which 3D models could be printed.

I use the MSFS blender importer/exporter made from the community
Blender2MSFS toolkit | FSDeveloper
Works well, you import the model like you do if you’re going to paint on a livery.
How to create your own MSFS liveries - YouTube
This shows you how to import it using the said toolkit.
The dimentions aren’t accurate, at least to what other people got, so I went with that was measured from IRL measurements, also the geometry of shapes isn’t how it was made, this makes it hard to directly “export” from blender to 3d print, however it is a much better reference having a decent reference that you can work on (even if it’s not accurate it gives you a ballpark) and it also gives the ability to see what you’re trying to make in 3d. This works for any msfs plane (I believe, haven’t tried all of them but I don’t see why it wouldn’t) and I’m also not sure if they’re all as far off as the C172. As I was just requiring the dimentions for the Cessna 172.
Hope this helps.

Yes, I think that will be of great help! Thanks! I will need to figure out how to use blender now, or maybe I can export it to a file format that sketchup can use. Either case, this seems like a big step in the right direction.

I reckon that you could import the plane into blender, then export it immediately into a .OBJ format (I assume sketchup imports this, like any other model software.)

Just wanted to follow up here that I was able to import the models into blender, then export them as a .dae to sketchup, and the models imported with accurate dimensions! Thanks so much for pointing me in the right direction!

Something to note is all of the textures were lost during import. There’s also a few strange artifacts like some surfaces missing (easily fixed by drawing a few new lines), some things like the yokes were not centered correctly in the collar in the panel, and there are these 2D place holders for the painted labels that aren’t located properly. But for the most part, everything can be measured precisely with sketchup’s tape measure tool and things like knobs and handles and even things like the console and yoke can be cleaned up and exported for 3D printing!

I would be very interested in the steps you took to make this happen. Like: Where is the dashboard file located? are the programs you used free?
I’ve never used the programs you mentioned, but I’m fairly proficient with F360, Cura, and Lightburn. So hopefully not too great a learning curve.
Thanks.
John

The program used to import the file is Blender 3D; it’s a free but powerful tool, however I have very little experience with it. There is an add-on for it to enable import-export of MSFS 2020 files I believe I got from github after some googling around and finding some links. I think there was even an old forum post on here somewhere. It would not import the file without this add-on. The file location for the aircraft models are:

The files are .gltf and both the exterior and interior models are located in that folder each with LOD 1 (best) through 5 (lowest).

I am much more familiar with Sketchup, so I exported the file in .dae (tried .stl first but that didn’t work properly) so Sketchup could read it and viola! It worked! I use the pro (paid) version of Sketchup, there is a free web-based version but I’m not sure that allows importing of other file types. I am unfamiliar with the programs you mentioned, but perhaps they can accept one of the formats that blender can export to.

What version of blender are you using? Are you using the Asobo plug-in? I’ve tried versions 3.1 and 3.3. I installed the plug-in as directed on Asobo’s GitHub page. It seems to install correctly but doesn’t show up as an option when I attempt to import the file. Any ideas?

Hi, I was the one who originally told him about the way to import/export the model.

The Asobo exporter is currently WIP and does not include a way to import files.

You can find a tutorial to import the planes found here

I don’t know anything about the sketchup way of doing it so can’t help with the exporting side of thing but Glad to see it worked! and hope you can use this too.

Thanks!
I didn’t get much time to play with it last night, but I was able to import the model, removed the unneeded parts, export it as an stl, then import the stl into F360. I just need to transform the stl into a body.
I realized that I could isolate and export the individual elements of the model. And be able to print everything (gauge rings, handles, buttons, knobs, faceplates, etc.) Straight from thise stl files. My dash will be a 1:1 exact replica of the in-game aircraft. Too cool.

I just wanted to go back on what I said earlier in the scale of the models. It appears I was wrong about them being accurate. They are close, but off for some reason. I measured the Bendix King transponder width in the 172 and it only measured ~5 3/4” when it should measure 6 1/4”. In the 152 it was ~6 1/4” and figured that was probably correct, but now they differ between aircraft. People have commented on different aircraft seeming to be bigger or smaller than they should, and maybe there’s more than just a feeling there. Could they actually have different scales? Anyway, in Sketchup you can re-scale the model if you have one known dimension, so that’s what I did. Curiously, the GNS530/430 and Bendix King are supposed to be the same width at 6 1/4”, yet the 530 is slightly less wide. Could be they just round up in the manuals they print.

I imagine there were different people working on different things. You’re right about things not being to scale. The 3" gauges in the 172 measure 74mm (2.91") while the raidos measure 5.75".
As I fly in VR, the important part for me is that panel match the panel in the sim. So if it’s not actual size, it doesn’t matter.

Yea if you 3d print the models as you find them in blender they will most likely match up better than if you were to print them with real life dimensions as they are probably a bit off to account for world scale in the game itself.

Here’s the attitude indicator bezel. Took about a half hour to draw up once I figured the best way to do it.
Should be pretty fast going now that I’ve figured out the process. I’ll probably do a mock-up first just to see if everything is in the right place. 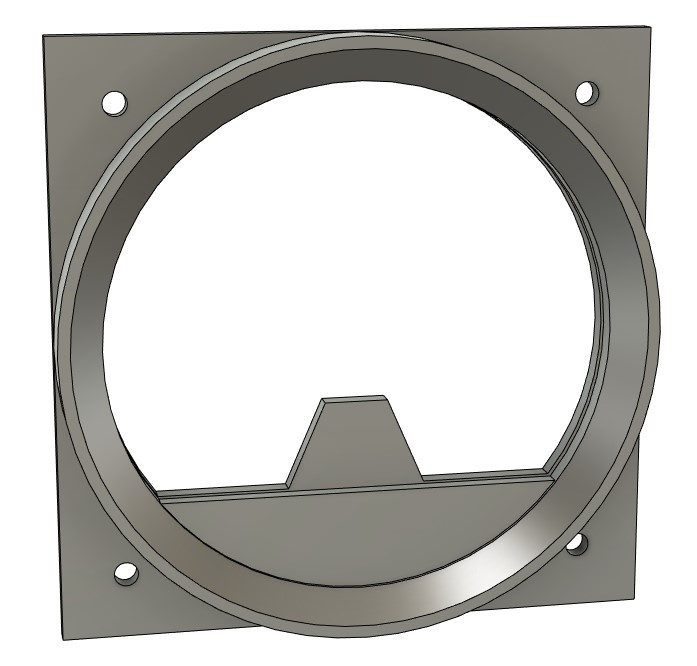