Prior to WU4, the logic applied within the sim to allocate a SimObject model and livery to a corresponding real-time AI flight seemed to function as per the flow chart below, and was working relatively well in my opinion: 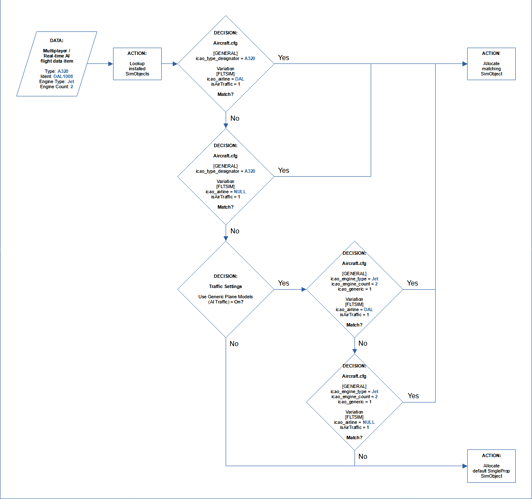 Since update WU4, this logic seems to have been intentionally or unintentionally changed. Now, incorrect model and livery selections are being allocated, often seemingly at random, and sometimes even when a matching SimObject model (icao type designator) and livery (icao airline) is correctly installed and configured, as per the flow chart below:

The SDK, in the Content Configuration-SimObjects-Aircraft-Aircraft Config Definition section, states the following in relation to the internal AI model selection logic:

Personally, I feel that the above is overly complicated, and I believe that the majority of users’ and developers’ expectations would be better served by a more simplified logic, as shown below. 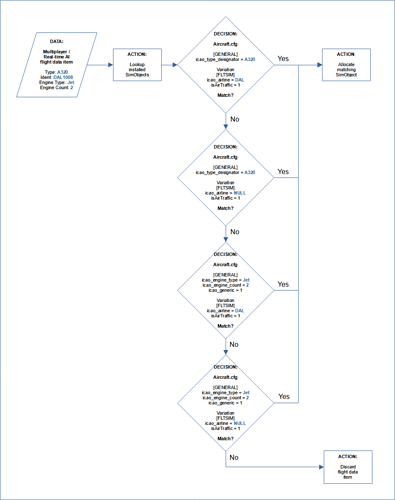 I fail to see why it needs to be any more complicated than that.

Thank you for this feedback! This issue is logged!

not sure what you are talking about. They did mess up live traffic by making it use random liveries from our community folder when we dont have a matching icao livery. However, if we do, it is correct 98% of the time. Once in a while it will match a wrong model. For example american airlines a320 will show up as a cessna, even though I have the AAL livery. But over 90% of time it is coorect and if i only use a320 as generic=1 then all will be A320’s.

Before update it was same thing. Livery match should always be priority, not model because the game doesnt have a selection of models to begin with.

not sure what you are talking about.

We’re talking about the internal conditional logic within the sim that makes generic model and texture selections based on real-time AI flight data icao values, and working to ensure that it does so consistently and predictably. What did you imagine we were talking about?

For example american airlines a320 will show up as a cessna, even though I have the AAL livery.

if i only use a320 as generic=1 then all will be A320’s. Before update it was same thing. Livery match should always be priority, not model

So you’ve hacked the config files to force the sim to use a single A320 model to represent all the different aircraft types in the world? Well yes, you’re perfectly entitled to do that I suppose. If I were you, I would probably have hestitated before I put that forward as a better solution than fixing the underlying model matching logic, but each to their own

Wow you are into Passive aggressiveness.

IMHO you have said nothing new because nothing has changed since update about model matching. It was never working brilliantly. The way they have it set up has always been about using the generics, but it constantly fails to even match based on number of engines since the beginning.

I put that forward as a better solution than fixing the underlying model matching logic, but each to their own

Well considering every update seems to put things two steps back, it is being realistic. Right now there are numerous groups that have “solved” the issues that ASOBO failed to fix or even things they broke. These people are enjoying what they “hacked”, as oppose to hanging around whining about something.

p.s. HACKING is a strong word, the CFG files were put there to be used and changed by modders. Stuff they don’t want us to touch we can’t touch.

Point you missed is that you said “update” messed it up. I saw the problem before the update. I also don’t see them fixing it anytime soon, it isn’t their priority. 9 months out and one livery pretty much sums it up. They also aren’t going to be adding models either to match real world aircraft. The so called “hackers” should be worshiped.

Maybe not related, but lately my static ground 320 traffic is now loading with a single livery only all over the airport. if I go to another airport it may be one of my other airbus, but 320 model is same livery all over airport now, I use to be able to see different 320 liveries that I have even at a single airport.